25 Food Idioms You Must Know! 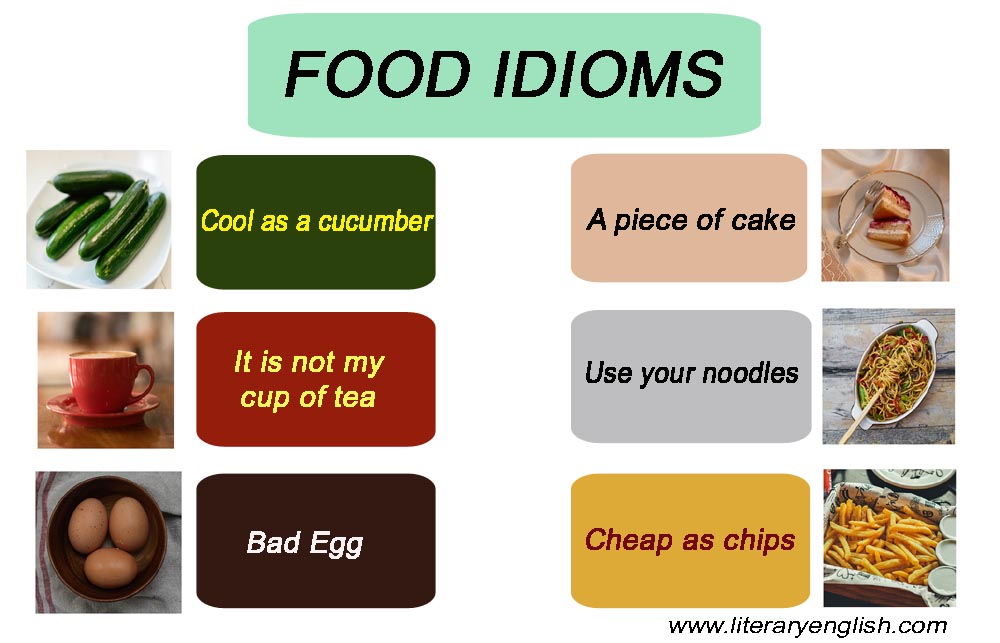 25 FOOD IDIOMS YOU MUST KNOW

Here are some common idioms based on food and drinks. Each food idiom includes its literal meaning and its figurative use in a sentence. Before starting food idioms, we will explain: what is an idiom?

WHAT IS AN IDIOM?

An idiom is a combination of words or a short phrase, which has a figurative meaning contrary to the literal meaning of that words or phrase. More than 25,000 idioms are used in spoken English language. Native speakers use them frequently in their daily life conversations, but non-native hesitate to use idioms in their speeches. Today, we will talk about few idioms that are all about food.

Meaning: One free with a dozen. (Thirteen)

Example: Excuse me! One egg may break in the basket and we are 12 people, could you please make it a baker’s dozen.

Meaning: A lazy person who sits on a sofa all the day.

Example: He is a couch potato. I never saw him outside his apartment except to go to work.

Example: We should remove bad eggs from our team.

Example: I thought I was just going to interview the secretary, but they let me talk to the big cheese himself.

Example: Writing for different niches is only my bread and butter.

Meaning: be extra nice to someone (usually for selfish reasons)

Example: We will have to butter Julia up before anyone tell her the news about her brother’s accident.

Example: Macon is the first carrot top I have ever seen in my city.

Meaning: Something very cheap or having low cost

Example: I bought three watches for you because watches were as cheap as chips on sale.

Cool As A Cucumber

Example:  I thought I was afraid of riding, but I was cool as a cucumber all the way to farm.

Cream Of The Crop

Example: We hired the cream of the crop to generate a good revenue this year.

Meaning: get upset over something that has happened and cannot be changed

Example: The window pan is broken into pieces and we cannot fix it. There is no need to cry over spilt milk.

Go On A Crash Diet

Example: Rida went on a crash diet and lost 5 kg in three weeks.

Example: John is a hard nut to crack. No one can drive him out of his way.

Have A Bun In The Oven

Example: I do not think Jane will come to the party this month because she has a bun in the oven.

Meaning: a controversial or difficult subject

Example: Choosing a new chairmen for the board is a hot potato now a days.

Example: In a nutshell, We should hire a van to catch train.

Meaning: In a difficult situation

Example: After buying an expensive car, he is in a pickle to afford a driver.

Example: To pass an initial class admission test is like low-hanging fruit for me.

Not My Cup Of Tea

Example: Networking is not exactly my cup of tea. I am IT master.

Example: My son is one smart cookie. He reads much higher than his grade level.

Example: My recruitment exam was a piece of cake.

Meaning: bought by many people

Example:  On coming Friday, I am going to spill the beans about my plans regarding study.

To Have Bigger Fish To Fry

Meaning: To have more important plans/tasks to go with

Example: I cannot stay here to receive a low paying project. I have bigger fish to fry.

Meaning: use your brain

Example: You have to use your noodles to understand this enigma. It is not much difficult as you are considering.

Meaning: I refers to refuse certain food because she wants to stay slim. When someone says like this (generally females), it means she want her figures to look good by taking care for her food/intake.

Example: I need to watch my figure.

2 thoughts on “25 Food Idioms You Must Know | Vocabulary”