Summary and Analysis of The Sick Rose by William Blake 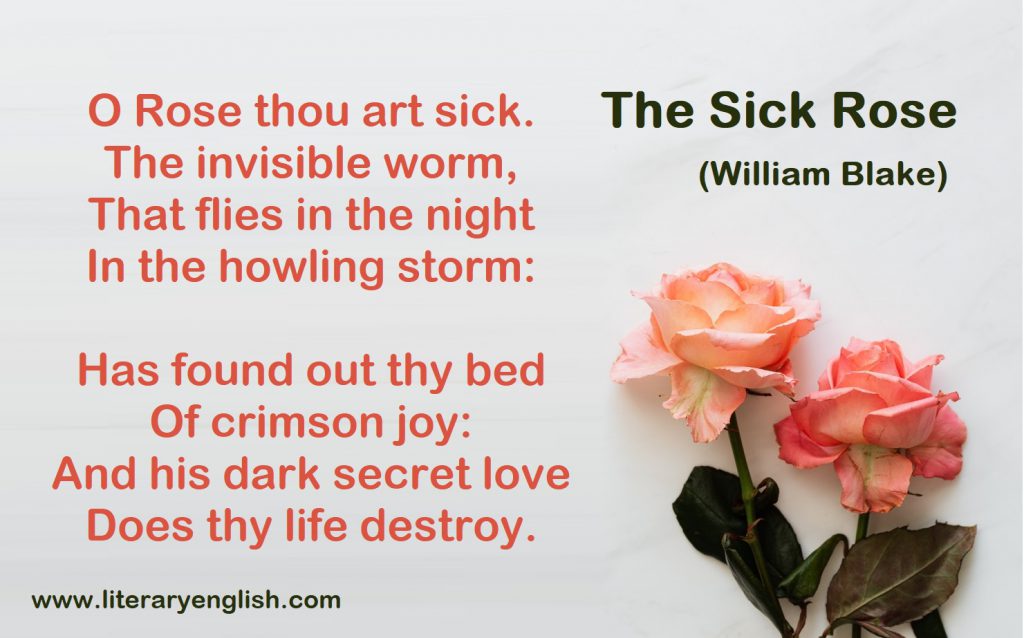 Introduction of The Sick Rose:

The Sick Rose is one of William Blake’s most famous poems. He published it in 1794 and is present in his book Songs of Innocence.

In this poem, the poet uses two symbols – rose and worm, to describe love. He, in most precise and poetic manner paints the picture presenting the pain of unconditional love.

The Sick Rose also portrays the hurt inflicted upon the innocent and naïve people of society by the experienced and cruel people.

Structure of the Poem:

The Sick Rose comprises of only two stanzas. It is a short and precise poem, and feels like an allegory, which tells a dark story. The quatrains have the rhyming scheme ABCB, so it is in ballad form. There are two stressed beats in every line except for line number 7, which has three beats. Punctuation in this poem is also asymmetrical.

Summary of The Sick Rose:

In the first line of the poem, the speaker addresses the Rose. He addresses it by using ‘O’, which means that he is in state of mourning for the Rose. The poet is saying to the Rose that it is sick and is expressing his grief that this sickness will eventually lead to Rose’s death. In the second line, the poet states the cause of the sickness, which is an invisible worm. In the last two lines of the stanza, the poet explains that the worm has flown in the night, during a storm to the Rose. It has found shelter from the storm in Rose, but in return is making the Rose sick and causing it suffering.

These lines tell a simple story about a Rose and a worm but contain a deeper hidden meaning. What the poet is actually showing is that the people who are empathetic and love others unconditionally, are taken advantage of by the society. The experienced and selfish people of the world exploit the naïve beings who just want the best for others.

The first line of second stanza tells that the worm likes the shelter of the Rose. Like a bed is comfortable and peaceful, the Rose’s petals are secure and cozy for the worm. In the second line, the poet talks about the beautiful red color of the Rose and how attractive it is and brings joy to the worm. In the last two lines of the poem, the poet states that the worm is in love with the Rose, with its beauty, shelter and the nectar it provides. Nevertheless, worm’s love is dark and secret as it is destroying the Rose, of which the Rose is completely oblivious.

Again, in these lines, the poet is telling the Rose that its unconditional love is the cause of its sickness. The worm is experienced and been through many storms. It loves the rose just because of the benefits that it is getting from it. When the Rose dies, the worm will move on to some other Rose to get its advantages. However, the Rose is innocent and naïve, and letting the worm stay safe in its petals without knowing that its own death is near.

This stanza shows the true picture of our society. There are people who use innocent beings for their selfish gains. When they get all that they want, they move on to destroy somebody else. In this world where malice and selfishness is dominant, the people with altruism and empathy are misused and crushed.

Analysis and Critical Appreciation of The Sick Rose:

William Blake wrote the Sick Rose so beautifully and presented a complete contrast of unconditional love and selfishness. In what seems like a simple story, lies a concealed truth. This poem can have a lot of different interpretations as it has symbols and is as precise as possible.

Blake often writes about morality and presents the bitter truth of our world. In this poem too, he is unveiling the face of our culture. He presents the Rose as symbol for pure people and Worm for the tainted and self-centered people. He is expressing his grief that there are such selfless people out there who simply wish for the best of everyone. These people are so empathetic and filled with unconditional love that they unknowingly destroy themselves while fulfilling needs of others. Love makes them blind and numb to their pain, they keep on pleasing others and get their peace and joy from that. However, there comes a time when these people are so drained and misused by the world that they collapse. The self-seeking ones just move on to someone new to abuse.

William has given this poem a tone of sorrow and grief, as he is mourning for these innocent and pure people of the society.

Another interpretation of this poem can be that love, as beautiful as it seems, in the end destroys a person and drains him of everything.

Themes in the Sick Rose:

The main themes that appear in the Sick Rose are Love, Innocence, Selfishness, and Destruction.

The Rose is full of love, and is fresh. It has been at the same place its whole life and has no seen the bitter realities of the world. In contrast, the Worm is selfish and filled with dark love. It has been through harsh storms and has now found the soft petals of the Rose to take cover in. As the Worm is experienced and knows the ways of the world, so it behaves with same cruelty with the Rose, even though it has love for it. The Rose, unaware of the Worm’s intentions, keeps on providing for the Worm and falls sick. This illness will eventually lead to its destruction. Just as the softhearted people loose in the end and the cruel always get their ways in this society.

Symbolism in the Poem:

The symbols used in The Sick Rose are Rose and Worm.

Rose stands for beauty. It is a flower and as flowers are fragile and short-lived, it is a symbol for fragility. In this poem, it is also used for unconditional love and innocence.

Worms are unwanted and cause destruction. In this poem, Worm is used as a symbol for selfishness, hatred and destruction.

About Authoress: The article “Summary and Analysis of The Sick Rose” was written by Sayeda Javaria. You can reach her at javaria.hanan@gmail.com or view her profile at Sayeda Javaria Hanan .