What are Modal Verbs?
[Modal Auxiliaries] 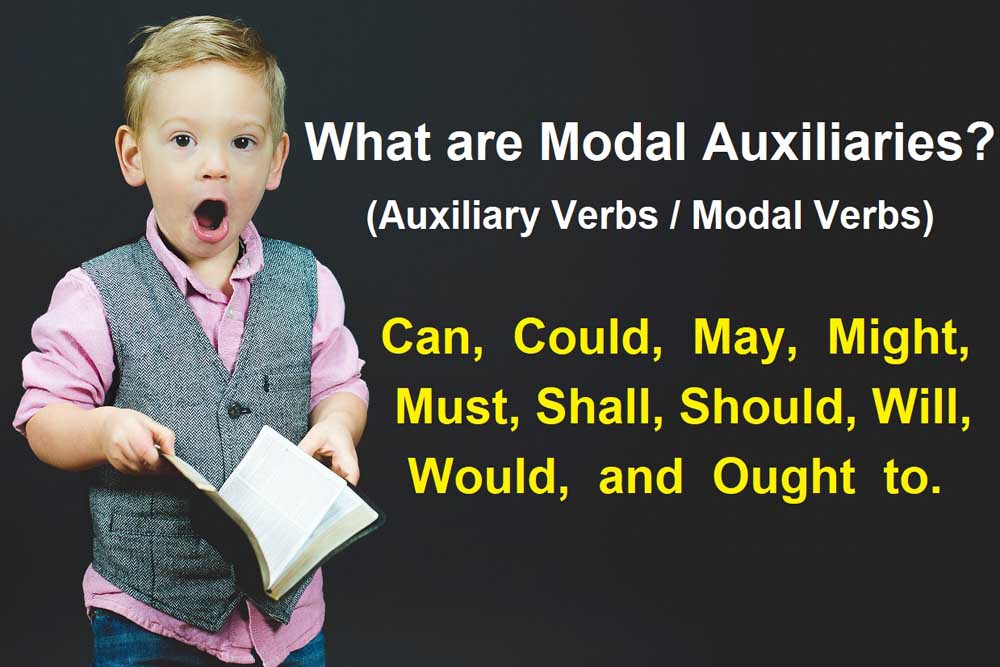 In addition to the three main auxiliaries, be, have, and do, there are some additional auxiliary verbs. These are known as modal auxiliaries, modal auxiliary verbs, or modal verbs and behave irregularly in English. They have a great variety of communicative functions and give additional information about the function of the main verb that follows it. They have fixed form and do not accept addition of suffix or prefix like “s”, “ed”, “ing” “un” etc. Modal verbs are followed by infinitives without “to”. The main function of the modals is to indicate modality allow speakers to express possibility, certainty, obligation, necessity, willingness, ability etc.

There are nine modal auxiliaries: can, could, may, might, must, shall, should, will, and would.

The expressions acting as verbs like ought to, dare, had better, and need not also perform function of modals and can be called semi-modal auxiliaries.

Use of modal verbs:

Wu use modal verbs in various ways to express some specific functions in a sentence such as: Ability, permission, prohibition, obligation, advice, probability, possibility, and lack of necessity.

Let us explain each modal in detail:

“Can” expresses an ability, permission, or possibility in a sentence. Look at examples below.

I can lift this forty-pound box. (Ability)

Too much dieting can cause weakness. (Possibility)

Can I use your red pen please? (Permission)

“Could” expresses an ability in the past, a polite permission, and a present possibility in a sentence.

I could play better game than you when we were in school. (Past ability)

It could rain next week. (Possibility)

Excuse me! Could we eat some cookies from your plate? (Polite permission)

“May” expresses;, ask a yes-no question in a sentence.

It may rain next week. (Probability)

You may start the paper. (Permission)

May I take your pen? (Yes-No Questions)

It is used for probability, polite permission or possibility in a sentence same as modal verb may.

We must be on time for exam. (Strong obligation)

She must be very tired. She’s been working since early morning. (Logical conclusion)

We use must not for prohibition in a sentence like “You must not smoke in the room”.

It expresses some intended future action in a sentence.

We shall go to attend her marriage ceremony. (Intended future action)

It expresses obligation, ask if an obligation exists, or an advice.

You should see a doctor if you are sick. (Light obligation) (Same as ought to)

Should I go to the doctor? (Asking if an obligation exists)

You should drink plenty of water in summer. (Advice)

It expresses intended future action such as to ask for information or a favor in a sentence.

I will drink plenty of water in summer.  (Intended future action)

Will you lend me some rupees? (Favor)

Will it be available soon? (Asking information)

It states a preference in a sentence; requests a choice politely and introduces habitual past actions.

I would like to take a cup of tea. (Preference)

Would you like to take a cup of tea? (Request a choice politely)

She would write to me every month when we were in love. (Habitual past action)

Some basic rules to use modals

Never make use of modal from things which happen definitely.

For example, look at sentence below:

The Earth revolves around the sun. (Here we cannot use modal verb because earth revolves definitely in every situation.

Questions that are formed by Modals do not require use of do, does, or did e.g. Can he eat six bananas?

Modals always follow a min verb in its infinitive e.g. she must read this novel.

Among all the modals, only would and could can be used for past.

Play a Quiz on Part of Speech