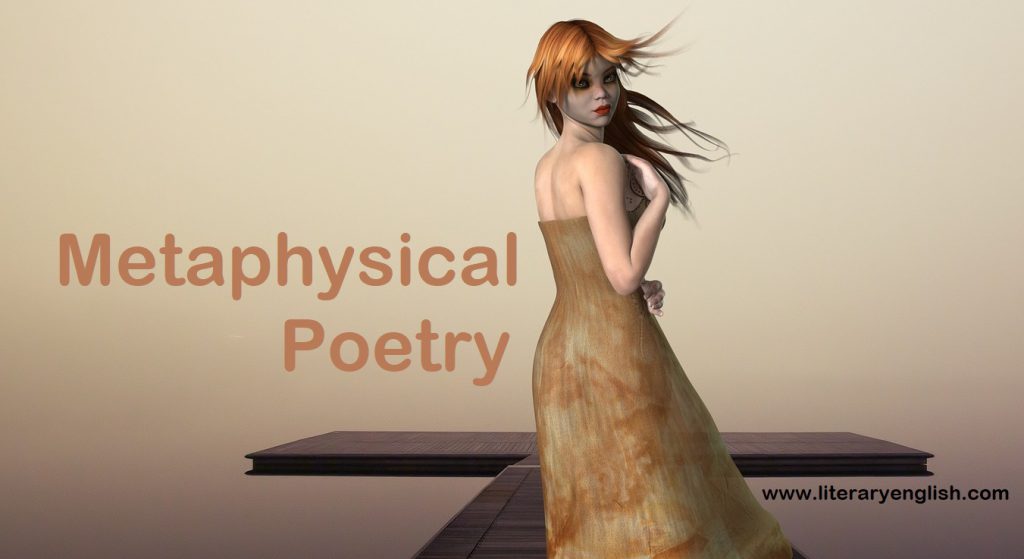 The word ‘Metaphysical Poetry’ is a philosophical concept used in literature where poets portray the things/ideas that are beyond the depiction of physical existence. Etymologically, there is a combination of two words ‘meta’ and ‘physical in word “metaphysical”.’ The first word “Meta” means beyond. So metaphysical means beyond physical, beyond the normal and ordinary. The meanings are clear here that it deals with the objects/ideas that are beyond the existence of this physical world. Let us look at the origin of word metaphysical poetry in more detail.

Origin of the word Metaphysical Poetry

In the book “Lives of the Most Eminent English Poets (1179-1781)”, the author Samuel Johnson made the first use of the word Metaphysical Poetry. He used the term Metaphysical poets to define a loose group of the poets of 17th century. (1) The group was not formal and most of the poets put in this category did not know or read each other’s writings. This group’s most prominent poets include John Donne, Andrew Marvell, Abraham Cowley, George Herbert, Henry Vaughan, Thomas Traherne, Richard Crashaw, etc. He noted in his writing that all of these poets had the same style of wit and conceit in their poetry.

The types of questions metaphysical poetry may make you ask yourself can be:

There are just so many questions like that, which otherwise we might ignore. The thing that is obvious here is that none of these questions has a definite answer in science. It is all about belief and philosophy.

Metaphysical poetry is a genre of poetry that deals with deep and profound subjects like spirituality, religion, etc. It is highly intellectual form of poetry and presents the world to its readers in a different way. It asks questions that science cannot answer. Metaphysical poetry prompts the readers to question their reality and existence. It takes one beyond the physical world and gives new perspectives through its imagery, wit and paradox.

“Highly intellectualized poetry marked by bold and ingenious conceits, incongruous imagery, complexity and subtlety of thought, frequent use of paradox, and often by deliberate harshness or rigidity of expression”

Metaphysical poetry talks about deep things. It talks about soul, love, religion, reality etc. You can never be sure about what is coming your way while reading a metaphysical poem. There can be unusual philosophies and comparisons that will make you think and ponder.

Even though it talks about serious stuff, it talks about it in a humorous way. The tone is sometimes light. It can be harsh sometimes too. The purpose is to present a new idea and make the reader think.

Another characteristic of such poetry is that it is unclear. Because it provides such complicated themes, the idea of metaphysical poems is somewhat not definite. It is different for every person. It depends on the perception and experiences of the reader. Every person will take something different out of the same poem based on their beliefs and understanding.

Metaphysical poetry is also short. It uses brief words and conveys a lot of ideas in just a small number of words. There are many maxims in this type of poetry too. John Donne introduced sayings into metaphysical poetry.

Other unique feature of this poetry is Platonic Love. The word is taken after Plato. Platonic love is a non-romantic love. There is no lust or need of physical contact. It is spiritual love and is mostly for God.

It arouses some extreme level of thoughts and feelings in the readers by asking life-altering questions. (2)

The Flea, The Sun Rising, A Valediction: Forbidding Mourning, Death Be Not Proud, by John Donne, The Collar, The Pulley, by George Herbert, The Retreat, by Henry Vaughan, The Definition of Love, To His Coy Mistress, by Andrew Marvell, etc.

Metaphysical poetry is to be read with an open mind. It is not purposely trying to convince readers to think in a certain way but it provides a new way of thinking. Metaphysical poets are highly intellectual and people of learning. Reader’s minds open up, their area of thinking expands, and they awaken by their writings. The challenging approach of such poetry develops the concentration of readers on the things that exist beyond this physical world. It also permits the poets to state their inner thoughts in the poetry though higher cognitive skills are required to digest the abstract ideas and concepts coined in metaphysical texts of poetry.

About Authoress: The article “What is Metaphysical Poetry?” was written by Sayeda Javaria. (javaria.hanan@gmail.com).

Back to Main Menu
Back to Literature Menu

What is Literary English?

John Donne as a Metaphysical Poet

Characteristics and History of Sonnet Writing

What is Figurative Language?

Most Commonly Used Figures of Speech