Introduction and Brief Story
Lord of the Flies by William Golding 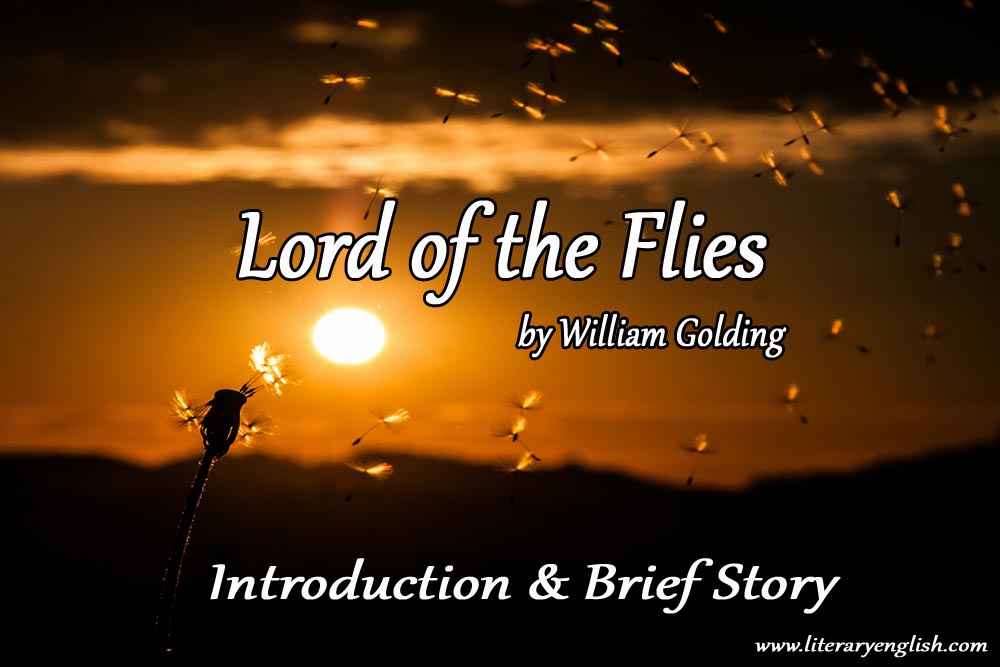 William Golding was born in Cornwall, England, on 19th September 1911. After graduating from Oxford he started working as a director and theatre actor. During World War II, he joined Royal Navy. His Experiences in war had deep effects on his view of humanity and inherited evils in it. Leaving Royal Navy, he started teaching and writing. His first and successful works “Lord of the Flies” became a bestseller. After gaining success in Lord of the Flies, he left teaching and wrote many other novels but could not gain fame like first one.  He was awarded with Nobel Prize for literature in 1983. William Golding died in 1993 in England.

Brief story of Lord of the Flies

During a nuclear war, a group of boys was marooned on a tropical island after their plan is shot down. The group is divided into two groups according to ages: the “littluns,” and the “Biguns”. Initially, the boys try to form a civilization. They elect a leader, Ralph, who commands to establish rules for civilization. They set signal fire hoping that a passing ship will see the signal and rescue them. Jack leads a group of choirboys later on who turned hunters, who perform duty of tending the fire. Jack is trusty for power and entices other boys slowly by mutiny and makes his own powerful group. The situation becomes worse when the conflict between Jack and Ralph arises.

One night, and a pilot of the battle comes down with his opened parachute on the mountain. This sight panics the boys on fire duty and they run with fear to inform Ralph and others that there is a beast. Ralph, Jack, and Simon try to explore beast but run back with fear. Jack blames Ralph and calls him coward and calls for new election and is successful in enrolling boys into his hunter group. Eventually, Jack’s hunters slaughter a mother pig and put the pig’s head on a stick as an offering to the beasts.

Simon discovers the dead body of a soldier on the mountain. Attempting to bring the news to the other boys, he runs down to inform them about the body. The Jack’s tribe was dancing in frenzy and they killed Simon considering a beast.

Ralph’s group dwindles and only three of the older boys, including Piggy, are left in his group. Jack’s group steals glasses of Piggy to light the fire. When Ralph and his small group ask Jack’s tribe to return the glasses, one of Jack’s hunters pushes a large stone on Piggy, killing him. The Jack’s tribe furiously captures the other two Biguns. Ralph runs away to save himself.

The Jack’s tribe tries to find and kill Ralph, and they start a fire to smoke him out of one of his hiding places, creating an island-wide forest fire. Ralphs run to save himself and all the boys are behind him. A passing ship sees the fire and a British naval officer arrives on the beach and Ralph falls in his feet.

Characters in the Novel

The main characters in Lord of the Flies are: Ralph, Jack, Piggy, Simon, Roger, Sam and Eric (two brothers), Maurice, Robert, and Percival. The boys are generally divided into two groups: Littluns and Biguns. In Littluns group the boys are aging 6 years and above and in Biguns, the ages of the boys are nearly 12 years.

Main Themes in Lord of the Flies

The central theme of the novel is the conflict between two competing impulses that exist within all human beings. These two impulses are civilization and savagery. The novel also focuses on loss on innocence and turning behavior of the boys from civilized to savage. The unfair use of power, effects of fear, and consequences of nuclear war are also the main themes of the Lord of the flies.