Brief Introduction to Characters in Lord of the Flies 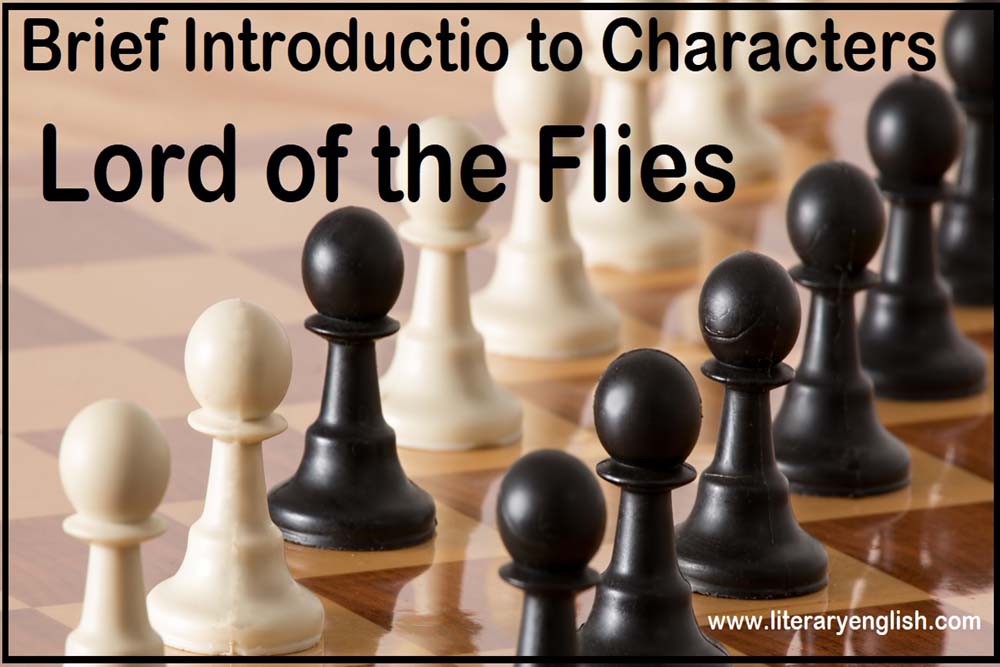 Main Characters in Lord of the Flies

The main characters in Lord of the Flies are: Ralph, Jack, Piggy, Simon, Roger, Sam and Eric (two brothers), Maurice, Robert, and Percival. The boys are generally divided into two groups: Littluns and Biguns. In Littluns group the boys are aging 6 years and above and in Biguns, the ages of the boys are nearly 12 years.

Short Introduction to Main Characters in Lord of the Flies

Ralph is the central character of the novel. He is a smart and good looking boy and is an elected leader of the boys and favorite among all the boys. He emphasizes on domestic order and the rules of civilization but soon loses his authority and popularity. The boys of his group leave him alone and join Jack’s group. Piggy is his best friend on the island and he weeps loudly at the end for the death of his friend.

Piggy is a fat boy with glasses. He provides witty conversations but remains a subject of the group’s ridicule for his weight, body posture, and lack of stamina. Most of the time, he remains with littluns and takes care of them. His glasses became a key element for the survival of the boys and finally rescue of other boys because the woods were set on fire by his glasses. He was loyal to Ralph even though all the boys left Ralph he remained with him. His death leaves Ralph alone and apprehensive.

Jack is the villain of the novel. He is representative of savagery and intrinsic evil in human nature. He is dictator and a cruel leader of the group. Initially he is the leader of the hunter group and when he gains power he urges his boy for mutiny and forcefully holds the charge of the leader of all the boys. He is responsible for the death of Simon and Piggy.

Simon is naturally a good boy and a visionary of the group. He spends time alone in the jungle, therefore he is considered odd by the other boys. Only Simon understands the true nature of the beast they fear and tells them that the dangerous beast is within human nature. Only Simon has the courage to investigate the dead body of the soldier on the mountain and tries to inform other boys but ironically he himself was killed by the boy dancing on the beach.

Roger is a member of Jack’s group and a cruel boy. He shows cruelty toward the weak and vulnerable littluns. He is the boy who pushes a big stone on Piggy and puts him to death. He tortures Sam and Eric until they join the Jack’s tribe. He prepares a stick on which to mount Ralph’s head after killing him.

Samneric are twin brothers who are in charge of keeping the signal fire going. They are loyal to Ralph and remain members of Ralph’s group until they are captured by the Jack’s tribe.

The littlest boys are named as Littluns, around ages six years and up. They remain in Ralph’s group until they are forced to join Jack’s tribe.

Maurice is a boy among elders who becomes one of Jack’s supporters. He accompanies him when Jack asks the boys to attack Ralph’s camp.

Robert is a boy among Biguns. He acts like a pig in one of the tribal dances when Jack missed a pig-hunt. The dance turns into fierce beating and he is hurt by beating.