Character Analysis of Ralph and Jack
(Contrast and Comparison) 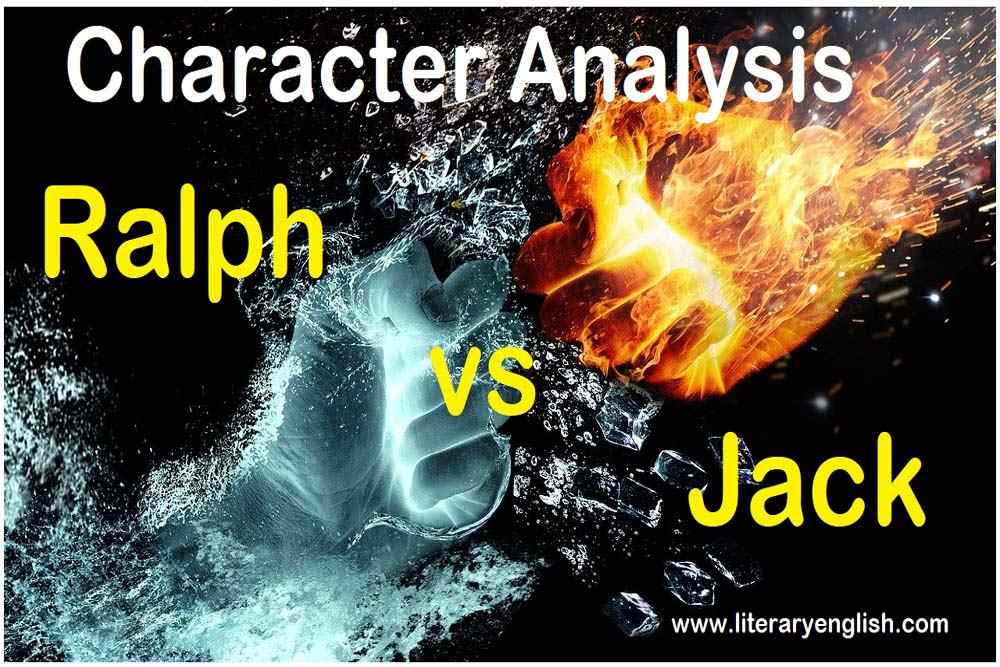 The novel, Lord of the Flies, depicts war between civilization and savagery. Ralph, in the novel, stands for civilization and democratic values where as Jack stands for savagery. Ralph represents leadership, the properly socialized and civilized young man. On the other hand, Jack represents evil and violence, the dark side of human nature. Ralph is the hero of the novel as in traditional novels whereas Jack is a true villain of the novel who played a villainous role throughout the novel.  Ralph believes in democratic principles of election through voting. Initially, when boys opt Ralph, their leader, Jack, like a dictator, rejects the voting and asks boys to make him their leader but Ralph pacifies him by giving him the charge of hunters.

Ralph is an attractive, charismatic, and decently intelligent young boy and demonstrates obvious common sense. Ralph’s sense of priorities represents his leader-like traits when he focuses on making shelters, sanitizations, and other rules for a civilized society. His capacity for command and leadership is apparent from the very start. His first speech reveals that he is a responsible leader and can command the boys well. He does not set rules only but he equally follows all the rules of the island unlike Jack who feels himself free from rules of the island.

Being a true leader, his concerns for shelter and signal fire are of vital importance. Ralph works cautiously and attentively to keep the group’s focus on the hope for rescue. He does not dictate but participates in every activity from making shelters to gathering woods for fire. Being a good commander, he also reprimands boys when they lack their responsibilities for their duties. When the time comes to prove leadership he leads like a leader. While investigating the castle rock, he leads alone, despite his fear of the so-called beast. During the panic caused by Sam and Eric by sighting a dead paratrooper on the mountain, only Ralph is able to proceed with both sense and caution. He was the only boy who feels both loathing over the murder of Simon he witnessed.

Ralph represents himself a boy of character and sensitivity. He has compassion, authority, integrity, courage. He also has clear awareness of the values of civilization. He struggles for what is good against what is wrong. However, with his rescue we experience that good will ultimately be rescued from the clutches of evil. His rescue represents that good will eventually prevail in the world.

The Jack is representative of the instinct of savagery, desires for power and violence. His desire of power leads him to a journey from a civilized man to a savage beast. In his lust for power, he does everything for his benefit by manipulating every situation. He is keen to make rules and reprimand those who break them, although he deliberately breaks them himself when he needs to further his own benefit. There is no word like sympathy in his dictionary. When Simon faints or littluns get ill; he shows no concern. He says that if there were a shortage of pigs, they would have to kill a littluns.

His main interest lies in hunting and killing living creatures. Hunting increases his inner instinct of the savagery that already ran close to his personality. The conflict on the island begins When Ralph focuses on working for civilization but Jack attempts to dominate the hunter group rather than working with Ralph. He frequently breaks the rule of the conch, stating that such rules do not matter. When there is his own advantage, he makes use of conch.

The dictator in Jack becomes dominant and in an attempt to get Ralph impeached, he narrates his hunting skills and importance of meat for the boys that Ralph fails to fulfill. And tell to boys that “He’d never have got us meat.” He asserts that such hunting skills make him an effective leader of the boys. When he gains power, he denounces and breaks every rule of the island. He declares, “We don’t need the conch anymore. We know who ought to say things.” He finally gets what he wants. His tribe calls him as “Chief,” showing a way of more primitive tribal leadership.