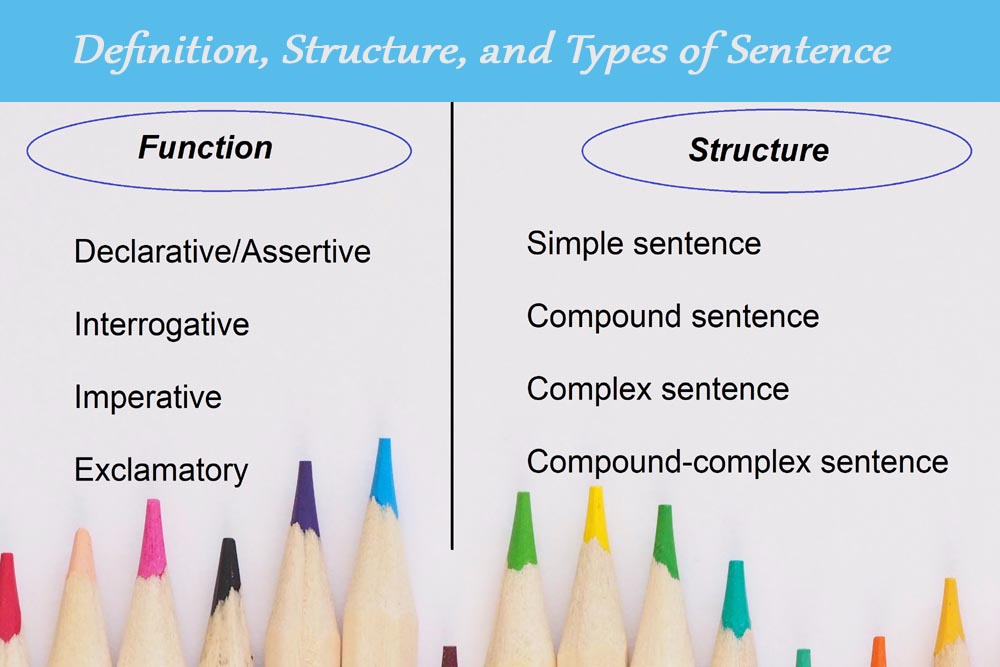 Definition of a Sentence

A sentence is defined as a word or a group of words that expresses a complete thought. It may consist on a single word, a single phrase or a combination of word and phrases. A sentence expresses an idea through four its types: assertive, interrogative, imperative or an exclamatory sentence. A sentence always starts with a capital letter and end with a punctuation mark depending on the function of the sentence.

She is a nice girl. (statement)

Is Jam a bad student? (question)

What a nice place! (exclaiming)

Structure of a sentence

Normally, Structure of sentence has a subject, verb and an object and the format of simple sentence in English follows as:

A sentence can be a complete sentence without an object or subject but verb should be present in a sentence. Verb is considered as the heart of a sentence.

Write an essay. (Here subject is hidden but we can fine verb and object)

Aslam writes. (Here subjects and verb are present but object is missing)

Types of sentence based on its structure

A simple sentence has a single independent clause (a single verb) and do not depend on other clause.

I love mangoes very much.

He is my brother.

Your pen is too cheap, and my pen is so tiny.

You are late, but I arrived in time.

A complex sentence differs from compound sentence and also has more than one clause but the difference lie here that one of the clause must be an independent clause and the other should be a dependent clause.

This room is much hot, therefore I switched ON fan.

Although she was happy, she got divorce from her husband.

Though Jam love watching horror movies, he rented the latest movie, and he enjoyed it with friends.

Henry forgot her sister’s birthday, so she called her for excuse when she finally remembered.

Types of sentence based on its function

She is a doctor. (statement)

I am feeling hungry. (feeling)

Earth is round. (fact)

An interrogative sentence we ask a question and must end with a question mark.

What is your name?

Do you know about my red pen?

Why are you late?

Exclamatory sentence conveys strong emotion. These emotions can be of sorrow, wonder, happiness, or anger.  Such sentences end with exclamation marks.

What a lovely weather!

Test you Grammar : Take a Quiz Now
Back to Home Page