Differences between i.e. e.g. and etc. 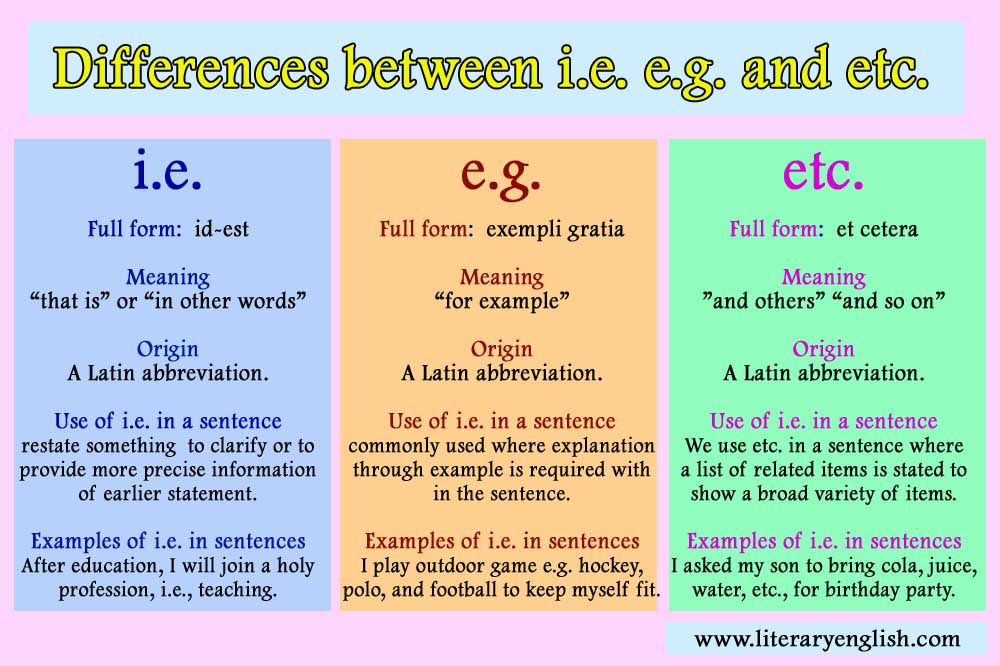 Differences between i.e., e.g. and etc.

Abbreviations, contractions, and short forms remained always confusing for English students. These terms are used in written form very commonly. Because, English language emerged when Latin and French languages were dominating languages. French and Latin languages also owned many words, contractions and short form from Greek, so these terms remained popular in all eras and shifted to next eras due to its popularity. Now, in modern world, where many languages has died and evolved but these terms are still alive in same or modified form.

There are many abbreviations, contractions, and short forms in English language borrowed from Greek, French, and Latin. Today we will discuss three confusing abbreviations that are i.e., e.g., and etc.

The short form i.e. is taken from id-est and it means “that is” or “in other words”.

The short form i.e. is a Latin abbreviation.

Use of i.e. in a sentence

Sort form i.e. is used to restate something in a sentence stated previously in order to clarify its meaning.  That restatement is meant to clarify and provide more precise information of earlier statement.

Examples of i.e. in sentences

After education, I will join a holy profession, i.e., teaching.

The short form e.g. is taken from exempli gratia and it means “for example”.

The short form e.g. is a Latin abbreviation.

Use of e.g. in a Sentence

It is commonly used where an explanation through example is required with in the sentence.

Examples of e.g. in sentences

You can play outdoor game e.g. hockey, cricket, and football to keep yourself healthy.

The short form etc. is taken from et cetera and it means “and others” or “and so on”.

Use of etc. in a sentence

We use etc. in a sentence where a list of related items is stated to show a broad variety of items.  It shows that there are other items in the list belonging to the same class.

Examples of etc. in sentences

Points to remember regarding e.g. i.e. and etc.

·         Many people think that e.g. and i.e. are interchangeable but it is not correct. However, there use is similar up to an extent but we cannot replace with each other.

·         Generally, abbreviations have a period at the end but these two abbreviations (i.e. and e.g.) have period after each letter either in center of sentence or at the end of a sentence.

·         If a comma a required after these abbreviations, we will place coma followed by period (i.e.,)