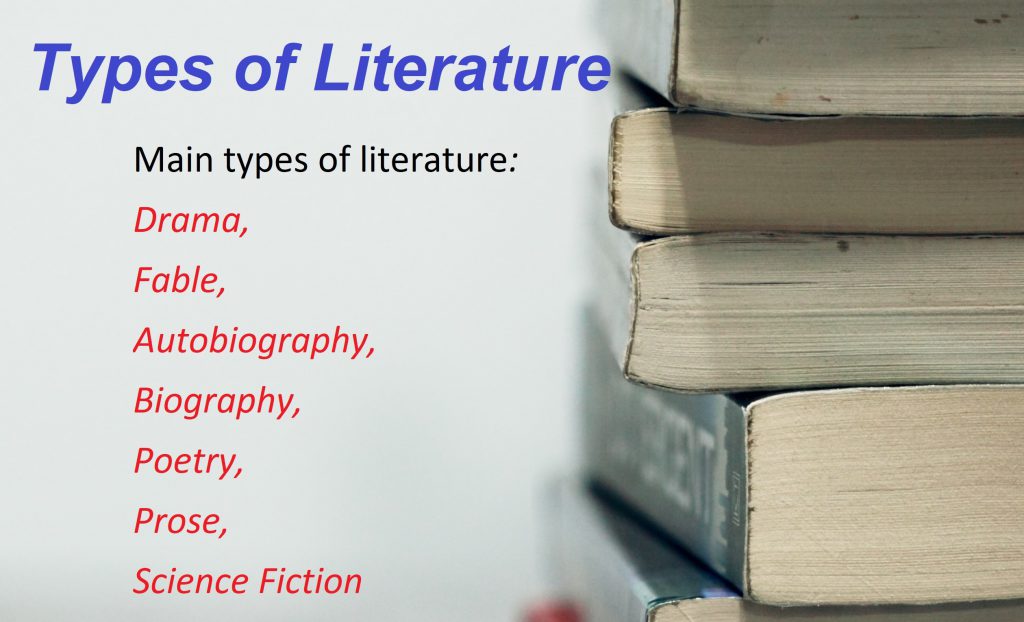 Literature generally can be any written work, but it especially is an artistic or intellectual work of writing. The usage of language in literature is sometimes different from the way it is ordinarily used. The difference is the use of artistic tools to create aesthetic beauty in a text. Literature is the depiction of the society.  It is a great tool to teach the morality to a society.

There are different types of literature through which different writers serve their own ends. Students of various linguistic institutes ask for help with such a request as “write my thesis“, as they can not complete difficult tasks in literature or write a dissertation on the subject of literature, so they use such services.

Here is the detailed study about types of literature.

Drama is a play in literature, and a playwright composes it. It portrays fictional or non-fictional stories. To explain away certain events, characters, or stories, a drama is produced, using dialogues or actions. It can be performed on stage, radio or on big screens as in films. Conflicts, emotions and impressive characters are required to produce a high-quality drama. There are many forms of drama but some of the most common are: comedy, tragedy, musical drama and melodrama. Let us have a brief explanation of these types of drama.

1. Comedy: Comedy is a type of drama, which is lighter in tone. Its purpose is to make the audience laugh and amuse them. It has a happy ending. Very unusual circumstances are there coupled with quick and witty remarks. People consider it as the most entertaining and fun form of drama and literature. An example of a comedy drama is ’The Comedy of Errors’ by William Shakespeare.

2. Tragedy: Tragedy is the type of drama that has a dark theme. It portrays suffering, pain, longing, and often death. An example of a tragedy drama is ‘Romeo and Juliet’ by William Shakespeare.

3. Musical Drama: A musical drama tells a story with dialogues, songs, music, and dance. These things convey the emotions in the drama. An example of a musical drama is ‘A Star is Born’, which starred Lady Gaga.

4. Melodrama: Melodrama is a kind of drama that portrays exaggerated emotions like tension or excitement. It arouses the same emotions in the audience and makes them indulged in it. The situation and the dialogues are more important in a melodrama than action. An example of a melodrama is ‘Still Life, Brief Encounter’ by Noel Coward.

Writers write a fable when the intention is to provide the audience with a moral story. A fable usually uses animals as characters to convey the story. In Fables, animals act like humans and are able to speak and understand reasoning. They are a personification of human characteristics and their nature. An example of a fable is the famous story of ‘The Tortoise and the Hare’, which almost every child has heard in his childhood.

Autobiography is an interesting thing to read because of its teller of the story is the one, about who the story is. The character himself is the writer and describes his life from his own original perspective and experiences. It gives you an insight on the person that is writing it, because they share their true-life events and thoughts. Mostly, famous people write autobiographies to tell their story to their fans and the world. A famous and spectacular example of autobiography is ‘The Diary of a Young Girl’, a book by Anne Frank.

Biography in literature tells the story of a person from another person’s perspective. Someone else writes it rather than the subject himself. The professional essay writer could be somebody close to the person or somebody who had studied about that person. Biography is different from a resume because it enlightens the audience with different aspects of a person’s life. A great example of biography is ‘Unbroken: A World War II Story of Survival, Resilience, and Redemption’, by Laura Hillenbrand.

Poetry in literature is a composition of rhythm, sound, and lyrics. The definition of poetry by one of the greatest poets in history, William Wordsworth, is “the spontaneous overflow of powerful feelings”. (1) The poet composes poetry in sort of a song to develop emotions and imaginations in the listeners’ hearts and minds. Poetry is aesthetic. The poet chooses words carefully, so the listeners can relate themselves to it. The four main types of poetry are haiku, free verse, sonnets, and acrostic poems. An example of one of the most beautiful books of poetry is ‘Ariel’, by Sylvia Plath.

Prose in literature is that form of literature, which is somewhat plain and simple. It has no special grammar structure or a writing pattern to follow. It is written in a usual tone, forming into a natural speech or a conversational tone. Nothing is specific in prose. Paragraphs or sentences can be long or short. Examples of prose include novels, newspapers, textbooks, etc.

Science fiction, also called “sci-fi,” is a genre of literature where most of the things are imaginary. The stories are about the future technology. These fiction stories also have a relationship to real science laws, because science considers those things possible in future, according to the scientific laws. Science fictions are sometimes true and sometimes they are just imaginations based on assumptions. Some examples of science fiction are, ‘The Time Machine’ by H. G. Wells, ‘Spies in Disguise’ by Blue Sky Studios, ‘A Wrinkle in Time’ by Madeleine L’Engle, etc.

Journalistic Literature is a sort of nonfiction. In literary journalism, the journalist gathers information and then creates and publishes. It combines the facts and reporting with some clever strategies and narrative techniques. These techniques make the reports more engaging and interesting. People call literary journalism also Narrative or New Journalism. Some of the most prominent literary journalists of past and present are Mark Singer, Richard Rhodes, Jack London, Stephen Crane, Tom Wolfe, Henry Mayhew, etc. (2)