Jane's Search for Identity in JANE EYRE
(By Asif Abbas) 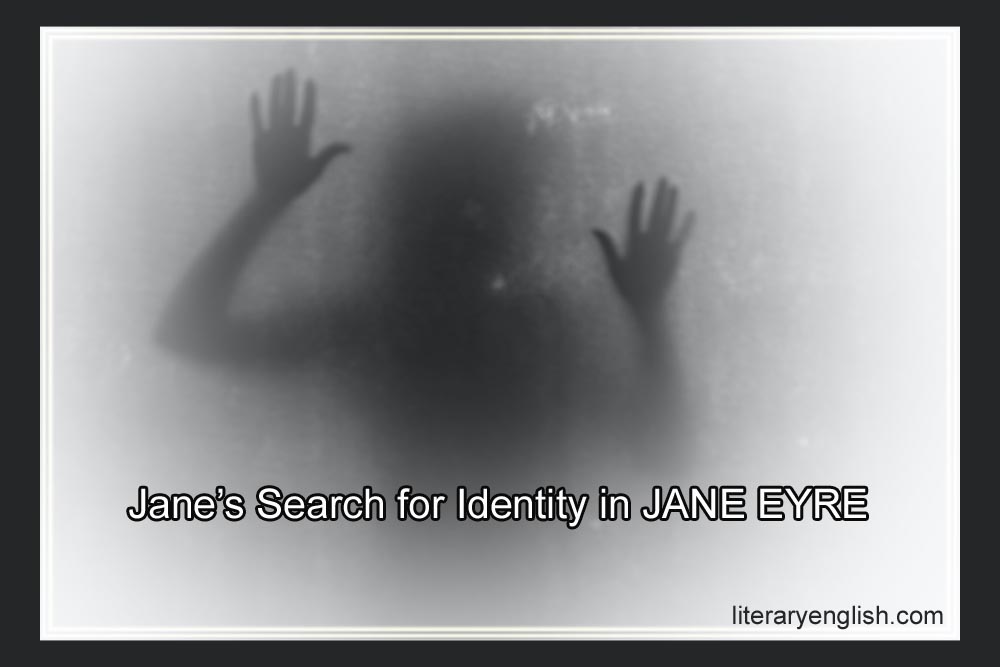 Victorian feminist writers wrote novels and other kinds of literature that questioned the conservative male-dominated society’s traditions and conventions and created female main characters as role models for women of their period, using the ideas and conceptions of enlightenment thinkers. Their fiction centred on women’s independence and identity. They questioned the notion of idle women. Looking at the challenges and problems of women of her time, Charlotte Bronte was inspired to write the novel ‘Jane Eyre’ to show the world that women can exert their own agency. Bronte pondered on the innate qualities of women to face adversity and make sensible and capable decisions through the character of Jane. The novel’s theme revolves around the lead character’s exploration of identity in the conservative Victorian society.

Because of her progressive ideas, Charlotte Bronte advocated for oppressed women in her novel Jane Eyre. In her work Jane Eyre, Bronte disproves the common notion that women cannot be virtuous, modest, and self-reliant at the same time. Jane is a fantastic individual who is both humble and ethical. As a result, she is self-sufficient and well-equipped to deal with any circumstance. Unlike her contemporary women, her independence from men eventually leads to her happy marriage with Mr. Rochester.

When Charlotte Bronte wrote Jane Eyre, it was unusual for a woman to pursue a career as a writer. As a result, she published her novel under an alias. Women were expected to follow a strict set of social and moral rules. Human emotions such as anger, passion, self-assertion, and assertiveness were not appreciated if women possessed them. Jane’s character is the polar antithesis of what an ideal lady should be in patriarchal Victorian society. She is tenacious and zealous in her fight against injustice. This novel is about Jane’s journey to realise who she truly is. This journey for her is challenging because of the difficulties she meets. Despite this, she never loses sight of who she is. She never surrenders or gives up. Because she is continuously aware of herself, she values her well-being over social conventions. Jane has authentic, progressive thoughts that she is not afraid to communicate.

Many of Charlotte Bronte’s characteristics can be found in Jane. Jane’s actions and words can always be traced back to their source. Jane believes in a sort of marriage based on an emotional connection. Jane despised sacrificing herself for the sake of money, especially because marriage was only a temporary answer to financial stability. She will not have to give up her identity when she marries. She will not do anything that could be interpreted as a betrayal of her female identity. Despite her intense feelings for Mr. Rochestor, she refuses to become his mistress out of respect for her femininity and self-respect.

Jane is a feminist with strong views on women’s rights in a patriarchal world. She strives for freedom and equality for herself and her fellow women worldwide in the face of repression and persecution. She is a force to be reckoned with as a character when it comes to cultural expectations for women. Jane is no exception to the rule that creators express themselves via their characters. What Jane expresses are Bronte’s thoughts.

Despite his significant influence, Mr.Rochestor is unable to compel Jane to dance to his tune, no matter how hard he tries. Jane never backs down from a confrontation when she notices something suspicious about him. Jane says, “I do not feel you have the authority to order me just because you are older and have seen more of the world than I”. Even in the framework of a master-servant relationship, Jane’s ability to argue for herself is undeniable.

Jane has a strong desire to make her own decisions and is willing to take chances. A marriage with St. John, according to Jane, would be a loveless union in which bodies would meet, but souls would be separated by miles. The sex would not be accompanied by emotional warmth. Jane understands that she will lose her identity and freedom by marrying John. She agrees to follow him to India, but not as his wife because she fears suffocation and death if they marry.

When she reunites with her lover, the previously existing power imbalance between them is reversed. They have finally achieved parity. She’s a wealthy woman with a family thanks to her inheritance. As a result, she can find the love and companionship she sought without sacrificing her sense of self-worth, dignity, or independence.

She is better prepared to face patriarchal society as an adult as a result of the trauma she suffered as a child at the hands of Reeds family. Jane’s search for her identity concludes at Marsh End with the discovery of her family. She is no longer alone in the world.

Despite Rochester’s financial predicament, Jane agrees to marry him anyhow. In the end, she marries her and pledges to take care of him for the rest of his life. This proves that Jane valued love over money or anything else.

About Author: The article was published by Asif Abbas. You can reach him at: asifabbaswarsak@gmail.com