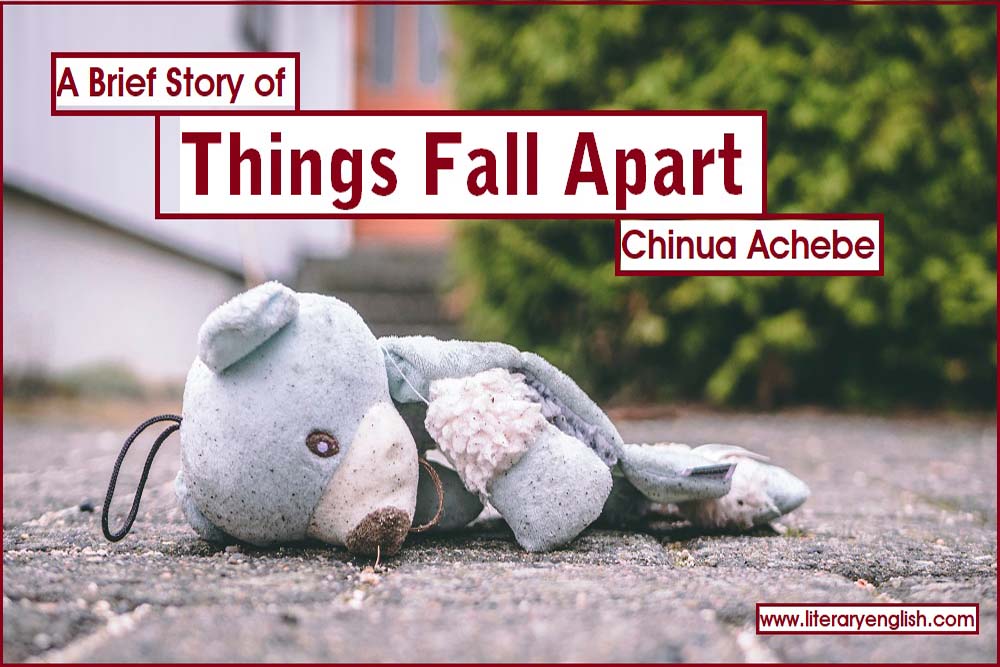 The story of Things Fall Apart begins with a young, muscular wrestler, Okonkwo who has aggressive nature but earns massive respect in his tribe Umuofia of the Igbo people. On the contrary, his father, Unoka, is known for his laziness and coward magic. However, unlike his father, Okonkwo establishes his home and reputation as a prodigious wrestler. Okonkwo’s efforts pay off handsomely as he starts to work as a farmer from an early age. However, his father’s weakness is a fear for him that someday he might become his father; that’s why he worked hard to bring honor to his village.

As a community leader, Okonkwo avoids the war between his tribe Umofia and Mbaino by adopting a child from his neighboring tribe. Ikemefuna (boy’s name) grows with Nwoye (Okonkwo’s son), and he adored him more than his biological son.

Three years passed, and his fear of becoming like his father turns into reality when He beats Ojiugo (his youngest wife) because she does not prepare an afternoon meal. He shoots a gun at ekwefi (his second wife), and then he violates the remaining peace in his life by participating in the slaughter of his adoptive son Ikemefuna. He is becoming more like his father day by day, but he wants to be a macho man by not showing any weakness or emotions on anything surrounding him. His son Nwoye starts to avoid him when he realizes the change in his father (the action of his father hurt him as he killed his adoptive brother)

After some time, public trial in which the nine clan leaders listened to a dispute between a husband and wife. Husband beats his wife, and when his wife’s brother takes her back and brings the matter to the spirits of their ancestors (nine clan leaders), the husband wants his wife back. Egwugwu (nine clan leaders) solve the issue by telling the husband to take wine to his in-laws. Okonkwo wants to become lord of his clan, but his world gets shaken up by murder.

Okonkwo does not participate in this counsel (public trial of a husband and wife) as Ezinma (his beloved daughter) was sick. But when he accidentally killed a boy changed everything.

The death of Ogbuefi Ezeudu makes him feel guilty as he was one of the clansmen, and he warns him not to take part in the slaughter of his adoptive son ( after the death of lekemenfuna’s he was disturbed but abandoned his sorrow to tell others that he is not a weak man). He takes part in the funeral of Ogbuefi Ezeudu and accidentally kills his son. Killing a clansman is a crime, and he must face his punishment. He got exile for seven years; even his animals were killed to clean the village from sins.

After the exile, he continues his life in his motherland, where his uncle helps him rebuild his life again. In the second year of exile, he hears that white men are destroying villages and turning them into Christianity. Mr. Brown (leader of white people) does not support the idea of changing the clansman into their faith, but he grows ill and is replaced by a strict and intolerant man Reverend James Smith. Egwugwu burned their church when he heard about the dishonor act equivalent of killing an ancestral spirit.

The District Commissioner is shocked by the devastation of the church and requests a meeting with Umuofia’s leaders. The leaders, however, are handcuffed and thrown in jail after being assembled, where they are insulted and physically assaulted.

Following the release of the prisoners, the clansmen convene for a meeting, during which five court messengers come and issue a cease-and-desist order to the clansmen. Okonkwo kills their chieftain with his blade, expecting the rest of his clan to join him in revolt. However, Okonkwo recognizes that his family is unwilling to fight. Okonkwo hangs himself after realizing that his clan will not go to war against the white folks. The story of Things Fall Apart ends with the tragic death of protagonist of story.