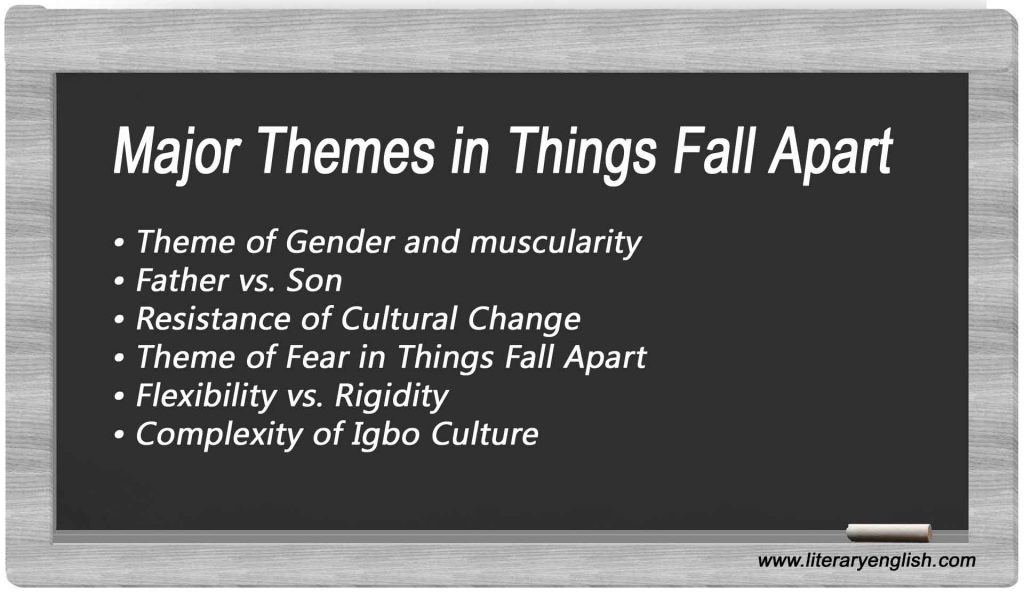 The novel Things Fall Apart is based on a story of a tragic hero of a rich cultured society of Igbo tribes. Chinua Achebe encircled many aspect of that culture before arrival of white missionaries. Achebe highlighted the consequences of white missionaries on that society who were firmly adhered to their social norms. Towards the end of the story, readers witness many events by which Igbo society begins to fall apart.

Main Themes in Things Fall Apart are: theme of gender and muscularity, father vs. son, flexibility vs. rigidity, resistance of cultural change, theme of fear, and complexity of Igbo culture.

Theme of Gender and Muscularity in Things Fall Apart

The Importance and superiority of male gender in Igbo culture is one of the major theme of the novel. If a man has no muscularity, he is considered as a woman as we learned in the novel that in Igbo tribes if a man who has not taken any of the expensive, prestige-indicating titles is agbala, which also means “woman.” The same fear was hovering over Okonkwo when a man says him that your father (Unoka) was agbala.  Okonkwo associates masculinity with aggression and feels that anger is the only emotion that a strong man should display. For this reason, he frequently beats his children and wives.

In contrast to Okonkwo, Obierika was a man who thought about things. Obierika refuses to accompany the men who were going to kill Ikemefuna, Okonkwo was told not to follow Ikemefuna killing because he raised him at his home for three years and due to paternal feelings, he should avoid his killing. However, Okonkwo not only volunteers to join the party that will execute Ikemefuna but also violently stabs him with his machete simply because he is afraid of appearing weak.

People of Mbanta were less rigid and violent than the people of Umofia. Therefore, Okonkwo during seven-year exile consider his maternal relatives on fault for their preference of negotiation, compliance, and avoidance over anger and bloodshed.

Unoka do not like wars and bloodshed, nor has he distinguished himself as a man in any other way. Unoka takes interest in arts and fun and prefers to drink and play music with his friends. However, his son is in contrast to his father. He is pure warrior and do not like music and entertainment. He only loves to beat his children and wives to make them strong.

Just as Okonkwo vs. Unoka, we see contrast between Okonkwo and his son Nwoye. Nwoye is like his grandfather and do not follow his father. Okonkwo is not ready to accept any change in the religion and traditions. However, Nwoye likes to accept change and joins white missionaries. Although Okonkwo feels ashamed of both his father and his son, the novel suggests that Okonkwo is perhaps more of an anomaly than either Unoka or Nwoye.

In cultural clashes, we come across different characters who have their own opinion regarding culture and traditions. Okonkwo, protagonist of the novel, is inflexible character and his rigidity leads him towards his doom even before arrival of European missionaries.  The arrival of a new culture only hastens Okonkwo’s tragic fate.

On the other hand, Obierika, a true friend of Okonkwo, is very flexible character. He is a sensible and thinking person who does not advocate the use of force to counter the colonizers and the opposition. H is also against many norms of his own Igbo culture. When Umofia’s people gather to kill Ikemefuna, he does not participate and condemns violence. He is also against the violent resistant for change. Rather, he has an open mind about change in culture. How he comments about the arrival of missionaries: “Who knows what may happen tomorrow?”

Thing Fall Apart is a culture-based story that deals with how the prospect and reality of change affect individuals and society. However, Igbo culture was very complex in its custom and traditions, and with the arrival of Europeans, it became a mess.   There were tensions among individuals about whether change should be privileged over tradition or they should remain adhered to the conventional norms.

Okonkwo, for example, resists the new religious and political norms proposed by Europeans. According to Okonkwo, Europeans are not manly and if he himself joins or even tolerate them, he will not be manly. Okonkwo’s resistance of cultural change is also due to his fear of losing societal status because he has gained many achievements in his culture dependent upon the traditional standards by which society judges him and change in culture may lose his worth.

After change in community by European Missionaries, converts enjoy a more elevated status and even Okonkwo’s son joins them afraid of his fathers’ threat. Many villagers are in between state to resist or embrace change. Converts are excited about the opportunities and techniques brought by missionaries. Even Obierika is also not rigid like Okonkwo to resist change in culture.

Fear played an important role in shaping tragic fall of the protagonist. Fear was not only issue of Okonkwo, but there are many characters in the novel who became victim of fear. Okonkwo feared from weakness and failure like his lazy, shameful father. He was a brave man but fear of weakness haunted on his mind though out the life.

Many of the characters suffer from fear of some sort. Ekwefi fears losing her daughter because she already lost nine children in early age. When Ekwefi’s daughter Ezinma became sick, she always feared to lose her. Nwoye was lazy like his grandfather and his father Okonkwo beats him every time to make him strong. He fears his father’s wrath and joins white missionaries. Fear in this novel leads characters to behave in negative ways that can bring the wrath of the gods, guilt, and the community disapproval upon them.

Complexity of Igbo culture is one of the main themes in Things Fall Apart. Igbo culture was full of complexities and conflicts even before the arrival of the Europeans missionaries. There are lot of aspects that reveal Igbo culture that include: the social and family rituals, justice codes and the trial process, food production, the marriage customs, religious beliefs, supernatural practices, shared leadership, and the opportunities for virtually every man to climb the clan’s ladder of success through his own efforts.