Female Characters in Canterbury Tales
(The Prioress & The Wife of Bath) 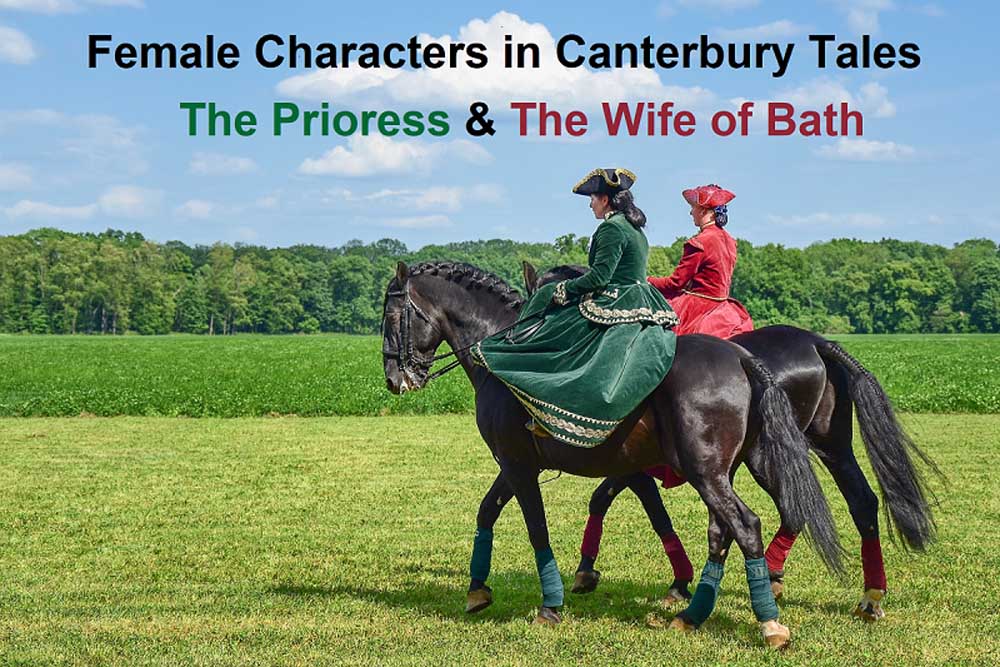 Female Characters in Canterbury Tales: The Prioress and The Wife of Bath

Like the other pilgrims of the Canterbury, the Prioress is one of the major pilgrims. She is the first female character among the pilgrims who is introduced as an ecclesiastical character. She is travelling with a nun and two priest. She is depicted as a dual face woman. In the general prologue, she is introduced as an aristocratic pious nun but she is raving bigot, because her narrated tail is of anti-Semitic attitude. She is running a small nunnery. She is quiet and simple in her ways. She knows how to sing the divine service well, beautifully intoned in a nasal voice.

She speaks French fluently and elegantly. Here Chaucer satirizes her for her manners in which she tries to show that she is from elite class because at that time elite class or kings and those in service to kings on major positions spoke French to show their authority. She acts like a court lady although she is a woman of faith. Her table manners are very gently that were depicted ironically by Chaucer. She knows how to eat without dropping a morsel of food from her mouth and she gently avoids her fingers by dipping them deeply in the sauce. She does not eat in a clumsy manner, in other words, but is graceful and fastidious in her table manners. She possesses a compassionate nature, which drives her to help people in need.

The Woman of Bath: Female Character In Canterbury Tales

An Attractive woman with a record of having five husbands and a lot of lovers. She lives in Bath, an English town. She is wearing a tight scarlet hose, shoes of new leather, a broad hat, and skirt with sharp spurs, which indicates that she rides astride like most women of her class. All these features, besides indicating a unique individuality are expressive also of her character. Her appearance demands attention and she wants people to know about her social status. It reflects her pride. Her wearing spurs and riding a horse show her lack of feminine shyness and male assertiveness as well as being choosy in the matter of horses and her “horse woman-ship.”

She is deaf from one ear and also a gap-toothed woman. This can be taken both as a sign of travel and good fortune. In the fourteenth century, a gap-toothed person was believed to be envious, irreverent, luxurious by nature, boldly deceitful and faithless.

The last mentioned feature brings us to the most distinctive quality of the Wife of Bath; she had five husbands besides other company in youth. A wealthy woman who lost a husband is a temptation to adventurers and her finding a quick husband is natural. Moral judgments apart, the Wife of Bath is a gigantic figure following the warmth of her passion and regretting that love was ever a sin. The overall impression that emerges is that of a strong character, proud, self- assertive, individual and self-conscious. She is a church going woman but her consciousness of her own worth shows itself on religious occasions as well. She gives a lot of charity.

She is also shown as a wide traveler. That the Wife of Bath travelled widely shows both her prosperity and the desire to escape from the constraints of domestic life.