Introduction to the General Prologue to Canterbury Tales 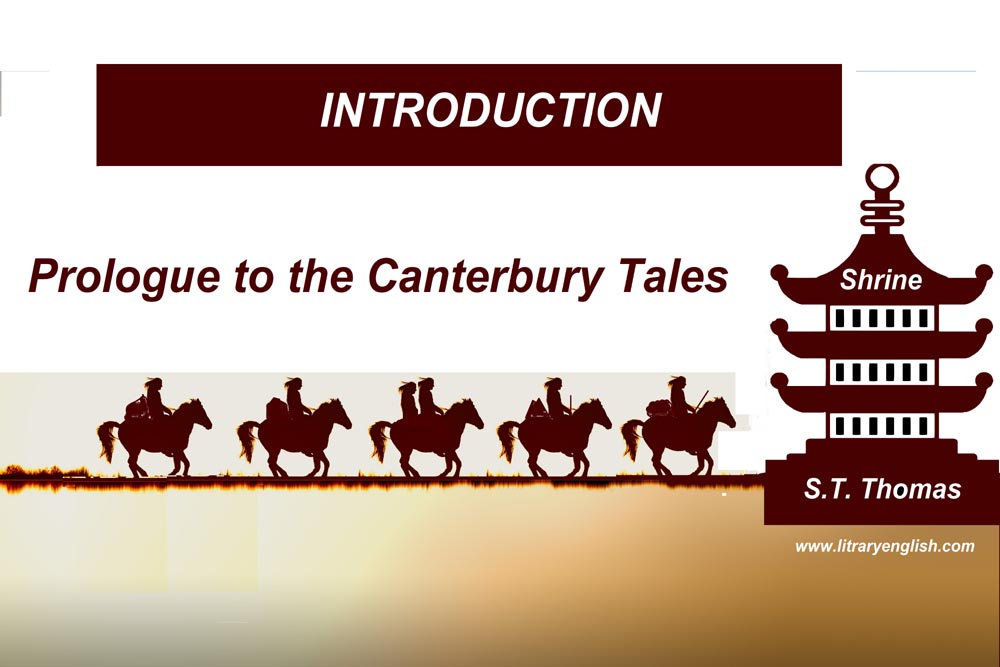 INTRODUCTION TO “THE GENERAL PROLOGUE TO THE CANTERBURY TALES”:

Geoffrey Chaucer was an English poet and author. Considered among the greatest poets of English in the middle ages, his most celebrated work is “The Canterbury Tales”. He has been called as the “father of English Literature” and “father of English poetry”, alternatively. The Canterbury Tales is the collection of 24 stories based over 17,000 lines written by Geoffrey Chaucer. He wrote Canterbury Tales in Middle English language. This is Chaucer’s most important book because it was one of the first books written in Middle English language. Chaucer also gained fame as a philosopher and an astronomer. In addition, he maintained his career in the civil service as a bureaucrat, courtier, diplomat and a member of the parliament. Chaucer wrote many books like, “The Books of the Duchess”, “The House of Fame”, “The Legend of Good Women”, “Troilus and Criseyde”, etc.

The Canterbury Tales is about gathering of people at the Tabard Inn in London. They were preparing for their journey as the pilgrims from Southwark, to the shrine of Saint Thomas Becket, at Canterbury Cathedral. The people narrated the collection of the stories at the story-telling contest organized for pilgrims. The prize for the best storyteller was a free supper. These tales included various lessons on morality, human struggles and humorous fares. The characters in the Canterbury Tales are drawn from every rank of society, from clerks to knights, from towns and country. As Chaucer portrayed the characters unevenly, there were few characters from poor class; less inclined and firm, than the characters linked by knight, squire or certain other churchmen. He was inclined to describe these characters firmly. His characters are lively, complex, and fallible human beings, interacting with each other in some way.

The Canterbury tales also reveal Chaucer’s knowledge of astronomy, astrology and medicine. Chaucer opens the tales with the sun running its course through the zodiac sign of Aries. Venus and Saturn play major role in the Knight Tales.

In the tale, the pilgrims gathered by chance. Its characters seem to come from all over England, representing experiences of their lives. As Chaucer worked as a courtier as well, some people think that Chaucer based his characters on people who he really knew, and who were at the royal court.

Harry Bailey served as the organizer of the story competition for the pilgrims. In the general prologue, Chaucer presented the ambitious scheme of having each pilgrim tell four tales apiece, two on the way to Canterbury and two on the return of Southwark. Chaucer expressed about different people discussing diverse stages they experienced. These tales have noble tales of the knights, love stories and real life incidents of the pilgrims.

Some people think that Chaucer copied ideas from other’s writings because some of the tales in Canterbury were similar to them. The characters however, are different. The characters have different occupations and personalities. They all tell different stories and in different ways. Chaucer’s main idea was to show how each person narrates a story to entertain the others as they travel along a very long journey. The Canterbury Tales is incomplete for no apparent or confirmed reason.