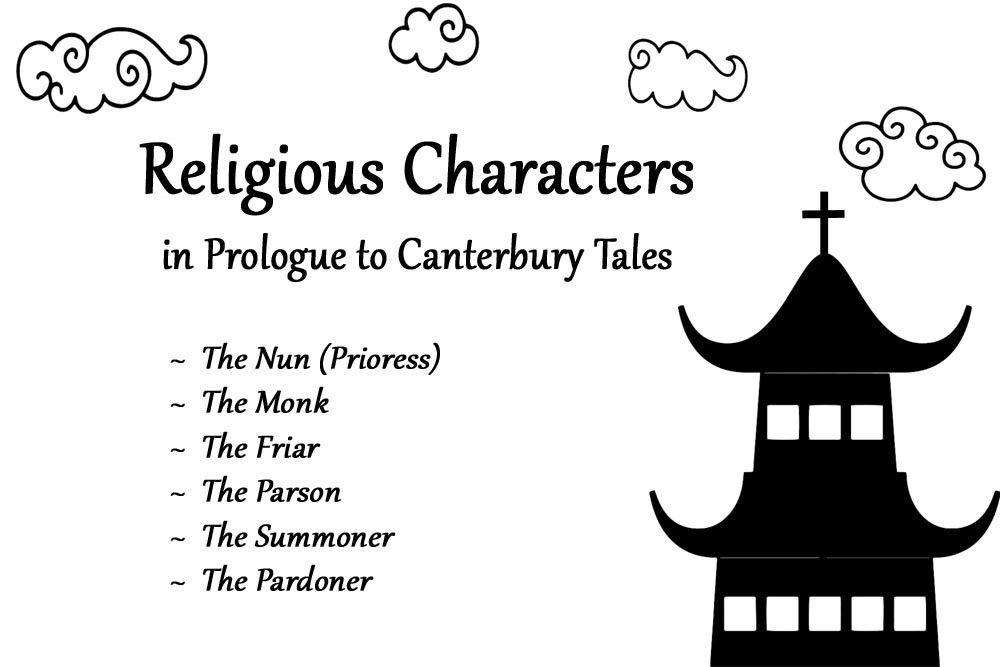 Chaucer depicted a range of religious characters in Canterbury Tales to portray the image of Christianity during that time. During Middle Age, church was in power and all the ecclesiastical characters were dominant in the society. At the same time, there was corruption in church where these ecclesiastical were involved, but few were struggling for the true image of the religion like the poor Parson. These religious characters include, The Nun, The Monk, The Friar, The Parson, The Summoner, and The Pardoner.

Like the other pilgrims of the Canterbury, the Prioress is one of the major pilgrims. She is the head of a small nunnery. She is very quiet and simple in her ways. She knows how to sing the divine service well, beautifully intoned in a nasal voice. She speaks French fluently and elegantly. Her table manners are without fault. She knows how to eat without dropping a morsel of food from her lips and she never wets her fingers by dipping them deeply in the sauce. She does not eat in a clumsy manner, in other words, but is graceful and fastidious in her table manners. She possesses a compassionate nature, which drives her to help people in need.

The portrait of the Monk is an ironic one. The Monk loves hunting and attaches no importance to religious injunctions, which strictly indicates that a monk should not leave his cloister or that a hunter could never become a holy man. He ignores all the rules and combines both lifestyles to make his life comfortable. The Monk is, therefore, rightly a hard rider. He wears furs and hunting boots. He has greyhounds as swift as birds in flight. His greatest pleasures lay in riding hard and hunting the hare, for which he spares no expenses.

Chaucer draws the character of the Friar in a very realistic manner. The Friar is a very authoritative person. He has the authority to hear confessions.  He hears the confessions most courteously, and the absolution he grants is pleasant. He never misses a chance to marry young women and get their dowry. He is an easy man in enjoining penances when he knows that he would get a good allowance. He asserted that if a man gave liberally to the poor Friar, it was a sign of true penitence, and he would be fully absolved of his sins. Therefore, instead of weeping and praying, men may give silver to the poor friars as a sign of repentance.

The Parson is popular because of his kind heart and love of charity. Even though he himself lives in poverty, he never misses a chance to help those in need. He is a devoted churchman unlike others. His preaching is about Gospel and he makes sure to adopt every rule and preach himself first so he can become an example for others.

He is a summoner of the church who collects fines or summons people to the church if they violate a law or commit any sin. His face is red, scarred heavily with sores and blemishes. It gives a frightening appearance to him. His taste in food is as bad as his appearance. He likes garlic, onions and loves wine. He is willing to do anything for wine. Where he should enforce law on people, he partakes in their sins and violation. He is easily bribed through money and wine to look the other way. Holding a lot of power over people, the summoner takes full advantage by forcing them to pay him in order to ignore their infractions.

The Pardoner is a thin man with greasy and pale hair. He is completely beardless which shows his cleverness. Self-conscious in his appearance shows he is from the middle class. His position, to offer indulgences or pardons of the Pope to sinners, allows him to sell pardons, miracles and complete repentance from sins at handsome prices. He has a corrupt profession, giving people false hope and making money from it. It is a business to take money from people as donations who commit any sin in order to give them a clean sheet to go into heaven. He likes to sing and preach whenever he gets a chance.