Introduction to the Life of Geoffrey Chaucer 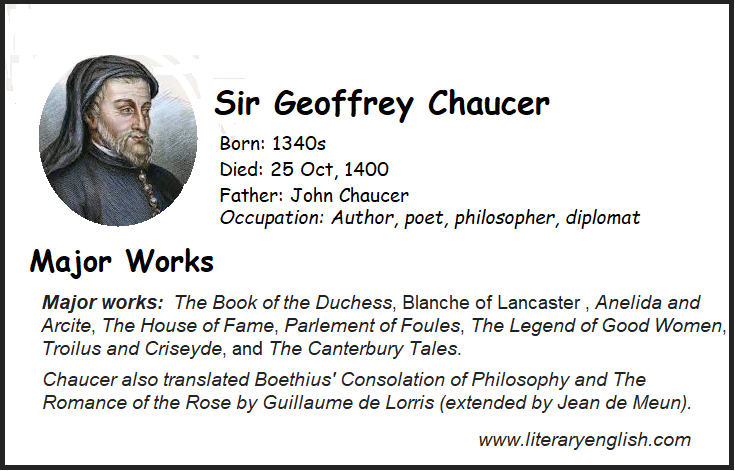 Introduction to the life of Geoffrey Chaucer

During 14th century, nearly 1340 or 1344, (the exact year is unknown), a renowned wine merchant called John Chaucer from London celebrated the birth of his first son whom he named Geoffrey. His grandfather, Robert de Dynyngton, moved from Ipswich to London and settled there. When they came to London, they changed the name of family to Chaucer a word that came from French word chauces associated with shoemaking. Robert Chaucer, Geoffrey’s grandfather, had flourished in London being a successful merchant. Robert Chaucer joined the king’s service in 1305, for supplying wine to the king’s table and for supervision of the taxes revenues collected from wine imports and exports, an activity in which Geoffrey would follow him.  John Chaucer followed his father’s courtly service and his business those in France and Italy and his wife Agnes de Compton, was also a member of the Court.

Geoffrey Chaucer was born in 1340. His father was a successful winemaker in London. Chaucer received an excellent education from Inner Court at St. Paul’s Almonry. Chaucer became page to the Countess of Ulster In 1357 where he met some of the greatest men in England like John of Gaunt and Duke of Lancaster.

In 1359, He went to France, as a soldier, on an invasion expedition that was resulted to failure. He was captured as a prisoner and after one year, he was successfully ransomed. No more information is available in documents about Chaucer for his next six years up to 1366.

After death of John Chaucer, father of Geoffrey Chaucer, his mother, Agnes de Compton, was married to another man, and Chaucer was married to Philippa de Roet. Historical documents do not reveal much about the marriage of the Chaucer whether this was an arranged marriage or based on love. Philippa was a woman of high rank and in the service of the queen like mother of Geoffrey Chaucer. Chaucer was in the service of the king and was granted with a life pension as a valet in 1367.

In 1370, king employed Chaucer for diplomatic errands, and during next decade he  made seven trips abroad. Next year, he was appointed customs controller in London. During that year, he quit the royal residence and leased a home in London city. In 1386, Chaucer received some other appointments from the king, the most important one is a Knight of the Shire.  That same year Chaucer’s lifelong benefactor, John of Gaunt, left England for a military incursion in Spain. King Richard II seized all customs appointments held by Chaucer promptly. In 1389, on returning of John of Gaunt, Chaucer was restored to his previous appointments.

Chaucer managed to hold courtly favors for the following eleven years and lived contentedly until his death on 25th of October 1400. His grave is in Westminster Abbey; known as the Poet’s Corner.

Some documents reveals that Chaucer started writing about 1360, and by 1372, he finished most of the work of translation of Roman de la Rose and wrote “The Book of the Duchess” and his the Legend of Good Women. He completed “The House of Fame” by 1380, the ‘Paliament of Fowls”, and some of the stories which appeared later in the Canterbury Tales. He translated Troilus and Criseyde By 1385 and during same time, he started the Canterbury Tales. In 1391, he completed Treatise on the Astrolabe and the next year, Envoy to Scogan. He wrote “Envoy to Bukton” and “To His Empty Purse”, just before his death.