Summary of the General Prologue to Canterbury Tales 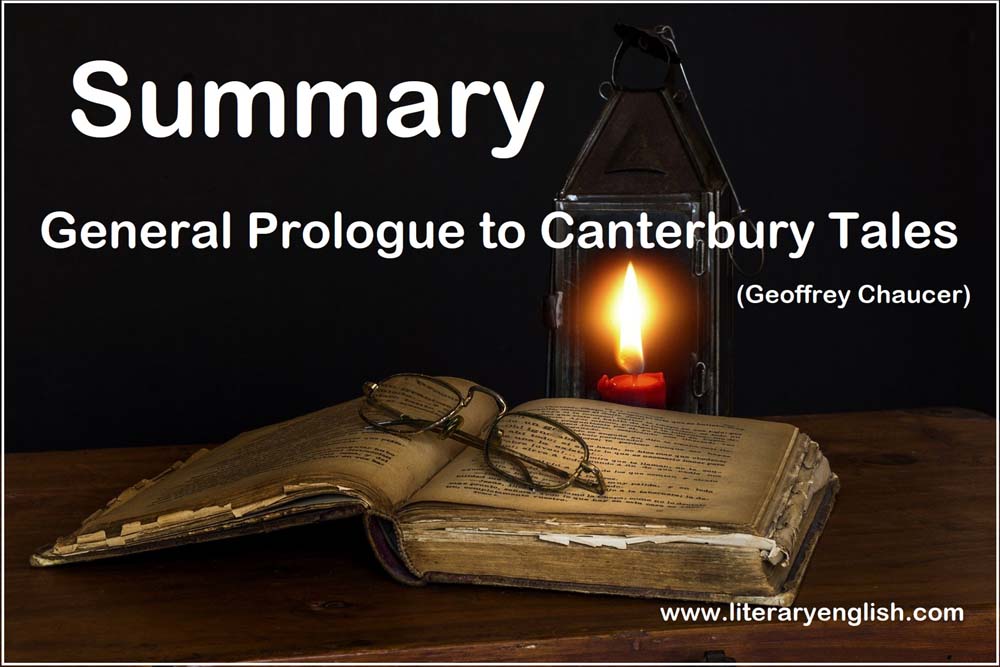 People from throughout England set out on a pilgrimage in April every year to Canterbury. They first join in at the Tabard Inn to organize for the pilgrimage. This year Chaucer himself is the part of this pilgrimage. On the day, the host of the Inn puts out the idea that they all should tell each other stories to and from Canterbury so that they could enjoy and entertain themselves. The host announces that the best storyteller is going to get a reward in the form of a free and lavish dinner when their journey ends. He also nominates himself the judge of the contest.

All the pilgrims agree upon drawing straws at the beginning of their journey. The Knight draws the shortest straw so he has to be the first storyteller. His story consists of battles, knights, honor, and love. After the Knight completes his story, the Host asks the Monk to tell his tale. Before the Monk could proceed, the drunken Miller interrupts that he will go first. He tells the story of a carpenter and his stupidity. At the ending of his story, everyone laughs except the Reeve because he had once been a carpenter. Now, to get revenge on Miller, the Reeve tells a tale of a cheating miller. When he is done, the cook, Roger, ensures to tell a true story but leaves it incomplete.

The Host realizes that the first day of their journey is passing rapidly. He encourages all the pilgrims to hurry with their tales. Using the best order of ranks that he knows, he asks the Man of Law to tell the next tale. The Man of Law tells the story of Fidelity. The story pleases the Host and asks the Parson to tell another story as good as this one. The Parson is in no mood to do so. He refuses and reprimands the Host for swearing him. They get interrupted by the Shipman. He tells an interesting and true story to make up for so much preaching and moralizing.

Next turn is of The Wife of Bath. Her story revolves around marriage. She claims that marriages including wife’s supremacy are the only happy ones. When she is done telling her story, the Friar volunteers to tell a tale about a summoner. The Host is the peacekeeper among all the pilgrims so he advises the Frair to leave the Summoner tale. The Summoner says that he has no problem with the tale. He also adds that he will repay in the form of a tale about a Friar. However, the Friar tells an extremely insulting tale about a summoner. It makes the Summoner so indignant that he himself starts telling an indecent story about the fate of all friars. He does not stop there, continuing then with yet another indecent tale about that one friar in particular.

After witnessing the exchange of such stories between the Friar and Summoner, the Host gets exasperated and asks the Clerk to tell a good and lively tale. The Clerk tells a story about a strong woman (Griselda) and her quality of patience.

The story is a complete opposite of what The Wife of Bath told. The Merchant jumps in complaining that he got a sweet wife with these qualities. The Merchant then proceeds to tell a story about a very young woman who used to cheat on her old husband.

When the Merchant finishes his tale, the host turns towards the Squire. He requests a tale about love and kindness. In turn, the Squire starts telling a tale of supernatural beings and events. Before he could finish, the Franklin interrupts him. He criticizes the Squire on his eloquence and gentility.

The Host is only interested in getting the stories told and getting the competition done. He orders Franklin to tell his story. The Franklin story consists of a couple happily married.

Next in line is the Physician. He tells the story of a father and a daughter who have anguish for each other. The story is so dreadful that the Host becomes disturbed. He asks the Pardoner to tell a joyous tale to restore the mood back to happiness. The Pardoner, not being a man of many morals, tells a story full of morals. Then, finishing his tale, he asks the people around to get the pardons and relics from him. The Pardoner recommends the Host to initiate the buying of relics, as he is top sinner in the pilgrims. The Host gets enraged due to this remark. To settle down the matter, the Knight intervenes and brings back harmony.

A tale of a young martyr is told by the Prioress then. The story is a serious one, and to cheer up the mood again, the Host requests Chaucer to tell a happy story. Chaucer starts to tell a story regarding Sir Topas. Because the style of Chaucer’s storytelling includes rhymes, the Host interrupts him and asks him to tell the story in simple style. Chaucer settles down with the story of Melibee, which is uninteresting.

After Chaucer’s telling, the Host expects a joyous tale from the merry Monk. However, the Monk narrates some tales in which there are unfortunate events happening to everyone. The Host and the Knight call out on the unbearable tales and ask something consisting of joy. After the Monk declines to do so, the Host requests a tale from the Nun’s Priest. She narrates the story of the Chanticleer – a barnyard rooster, his lady, and a fox. Then the Second Nun settles with the story of the events that took place in St. Cecilia’s life.

At this point, there are two men, who come up to the people of pilgrimage, a master, and his servant. They are welcomed by the host and are asked if they would like to tell any stories. The servant says that he has tales full of amusement from his master’s life. However, when he starts to narrate them, the master creeps away humiliated.

After this, when the pilgrimage is approaching near their destination, the Manciple tells a tale in place of the Cook. He first makes fun of the Cook, who is too drunk that he cannot tell a tale. Then he narrates the tale of a crow, white coloured who has the abilities to talk and sing. Finally, it is time for the last person left, the Parson, to tell a tale. The Parson is a truly pious man. His tale is actually a sermon and is the longest one. After all the tales, “The Canterbury Tales” end with retraction from Chaucer. He apologizes for offensive words and parts in all of his works and repents from his sins.