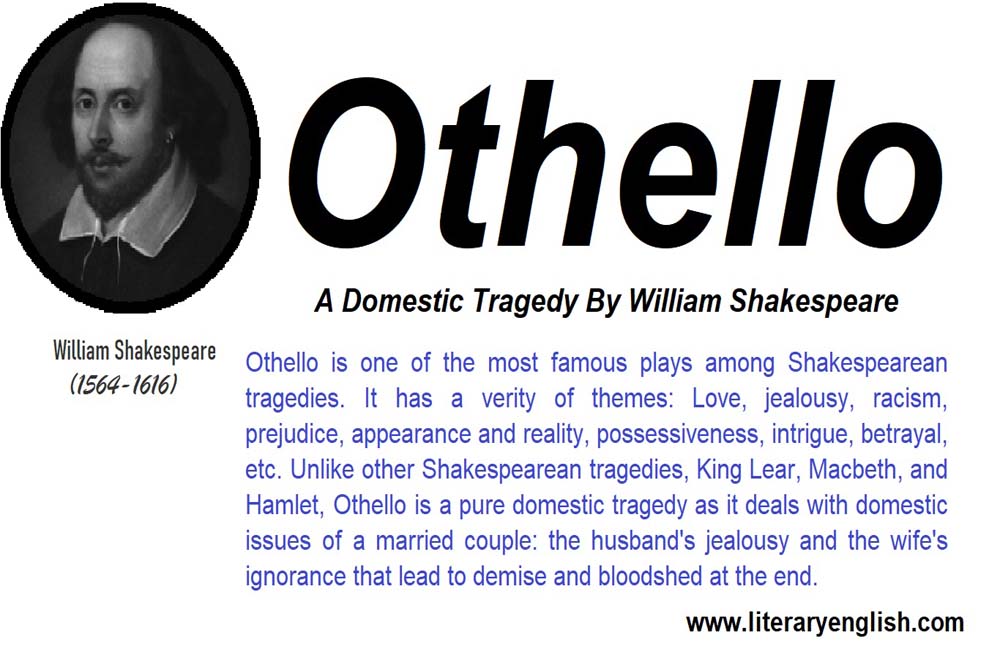 An Introduction of Othello

Othello is one of the most famous plays among Shakespearean tragedies. It has a verity of themes: Love, jealousy, racism, prejudice, appearance and reality, possessiveness, intrigue, betrayal, etc. Unlike other Shakespearean tragedies, King Lea, Macbeth, and Hamlet, Othello is a pure domestic tragedy as it deals with domestic issues of a married couple: the husband’s jealousy and the wife’s ignorance that lead to demise and bloodshed at the end.

Othello is simplest in its form with well-structured and single unified plot. It has limited numbers of characters with equal involvement and everyone is performing his own individual role, which increase its comprehensibility. Othello has often been described as a “tragedy of character” and that is why it is a domestic tragedy.

A brief Story of Othello

Othello, An African Moor, General in Venetian Military Force, married to a Venetian girl Desdemona. Iago, one of the soldiers under Othello’s command, hates Othello for not promoting him to the position of the lieutenant and plans for the downfall of Othello. To achieve his motives, Iago uses his friend Roderigo, who is in love with Desdemona and wants to marry her, to pave his own way. Iago tells Roderigo that Othello preferred Cassio although I deserve for this post.

Iago plans a web to entrap Cassio for demotion by making him drunk and put him on a fight with Roderigo meanwhile Othello appears and ask who is responsible for this fight. Iago blames Cassio and Othello removes him from his position as a punishment.  Iago manipulates this situation by asking Cassio to ask for help from Desdemona to get back his position. Meanwhile, Iago creates suspicion in mind of Othello that Cassio is in adulterous relation with his wife, Desdemona. Iago, as a proof, manipulate Cassio’s meeting with Desdemona for getting back his position and Othello suspicion gets fire to see that his wife is in relation with other Venetian and he thinks that he is Black Moor and how a Venetian girl can love him.

Othello plans to remove both to neutralize his jealousy and ask Iago to kill Cassio and he himself take the task to kill Desdemona. Iago uses Roderigo to kill Cassio, but Roderigo fails to kill Cassio who gets wounded only, Iago kills Roderigo. At the same time, Othello kills his wife, Desdemona. Emilia, wife of Iago, who was maid to Desdemona witness death of her mistress and reveals it to all. Othello tell her that he killed her because she was in relation with Cassio. Emilia justifies Desdemona’s true love and says that her husband, Iago, mad you mad in this jealousy by his multiple intrigues. When Othello comes to know what reality is, he stabs himself and dies with his wife.