Main Characters and their Analysis
The Old Man and the Sea 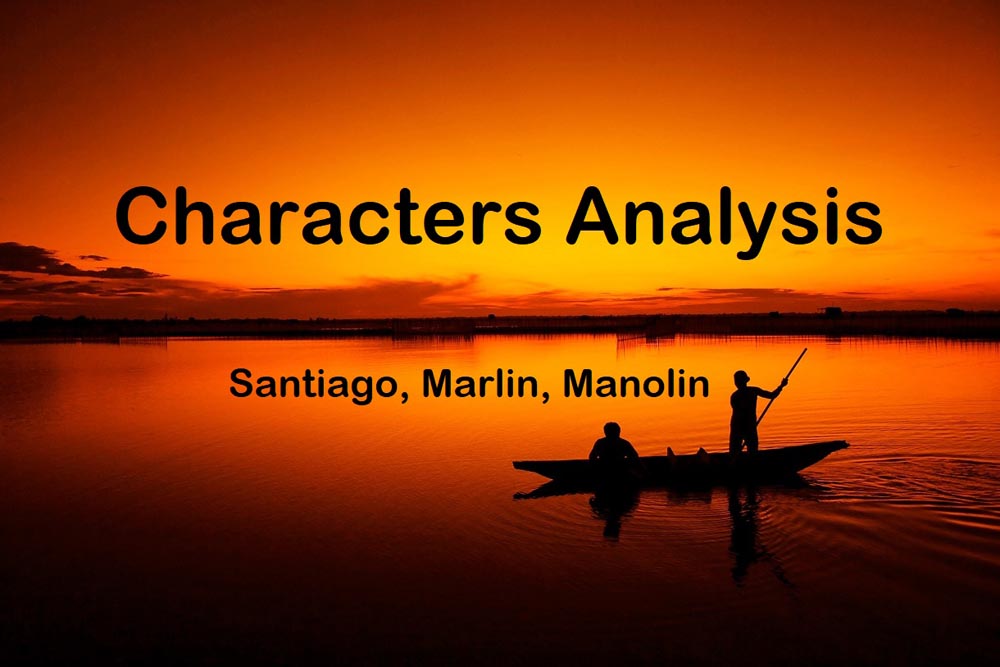 In this article you will learn about main characters and their analysis in The Old Man and the Sea, and their roles in the novel.

Main characters in the The Old Man and the Sea

Main characters in The Old Man and the Sea are: an old man Santiago, a fish Marlin, and a young boy Manolin.

Character sketch of Santiago: The Hero of Old Man and the Sea

Santiago is the main character of this novel. The whole story revolves around him and his moral values. He lives in Cuba and is impoverished because his good days are long gone. His wife has died earlier and he never had any children. Now, at such an old age, he is unable to catch a big fish or any fish at all at a regular pace. 84 days is the longest period in his life where he has not been able to catch any fish.

A fishermen’s reputation depends on his luck and how many fish he can catch. The old man is considered a stroke of bad luck in the community when it comes to fishing. He used to teach fishing to a boy who had been with him from a young age. Now his parents have sent him to learn from other fishermen because of Santiago’s bad luck. But, what sets Santiago apart from every regular fisherman is that he is dedicated to his profession on a spiritual level. Mostly fishermen join it to earn money but he takes it as nature’s course, which has to happen.

Santiago strongly feels that he is the part of that nature’s course, playing his role in catching the fish. His moral values are much different from the others when it comes to fishing properly and professionally. Indeed, Santiago’s philosophy and internal code of behaviour make him unconventional in his society. Santiago’s dedication to his profession and talent separates him from the pragmatic fishermen motivated by money. He stands apart from Cuba’s evolution to new materialism and a village fishing culture converting to the fishing industry. He remains dedicated to the profession he sees as a more spiritual way of life and a part of nature’s order in the eternal cycle. It makes all creatures brothers in their common condition of both predator and prey.

Santiago wants an extremely big catch – not only to survive but also to prove his skills once again. He wishes to restore his identity as a fisherman and secure his reputation in the community. To make sure that Manolin will always cherish his memories and becomes his successor, is one of the most important things in his life.  For Santiago, the most important thing in life is to live according to one’s beliefs with great enthusiasm and dignity. In addition, to use one’s talents and gifts of nature to the best of one’s ability, to struggle and to endure.  Moreover, save your individual existence through the work of your life, accept the inevitable destruction with dignity, and pass on to the next generation all that you have achieved. In these desires, He reflects the desires of all of us.

What makes Santiago special is that despite a lifetime of hardships, he is still a man in charge, and an expert who knows the tricks of his fisherman’s craft. His eyes remain young, cheerful, and undefeated. He knows how to rely on the transcendent power of his own imagination to engender the inspiration and confidence he needs. He wants to keep alive in himself and others the hope, dreams, faith, absorption, and resolution to transcend hardship.

The marlin is a fish that has more to it to it than any other could possibly have. It is not just a big fish but also one with a true fighting spirit. Equally balanced with a successful fisherman and locked in a long battle.  It is also a creature to which Santiago offers the same qualities that he possesses, admires, and hopes to pass on. It has the dignity of the soul, greatness in life, loyalty to one’s identity and ways, endurance, and beauty.  Since Santiago and Marilyn get locked in battle for three days, they develop a close relationship.  Santiago first takes pity on the fish, praises it because he does not want to kill such a precious creature, then empathizes, and recognizes it.  He recognizes that just as a marlin was born to be a fish, so was he born to be a fisherman.

He comes to the realization that he needs to kill it in order to survive, and restore his dignity. They are brothers in the strange circumstances brought upon them by nature, trapped in the natural cycle of hunting. Marlin’s death represents Santiago’s greatest victory and the promise of all the confusion he desperately hopes to redeem his individual existence with.  Yet, like Marlin, Santiago must lose and suffer.  After being attacked by the Mako shark, Santiago eats marlin to maintain his body, and completes the natural cycle in which the great creature transfers itself to Santiago.  Not only are all creatures hunters and prey, but they also nurture each other.  Marlin’s brave and relentless struggle in order to save its life becomes Santiago’s bravery, which is inevitable in Santiago’s struggle to save the marlin from the predators.

The Scavenger sharks snatch all the material value from the marlin’s body, leaving only its skeleton for Santiago.  Nevertheless, before the skeleton washes away with the flow of tide and turns to garbage, it becomes a quiet witness to Santiago’s greatness. It becomes a vehicle for internal moral values, through which he wants to give meaning and dignity to his existence.  The fisherman who gets the privilege to measure marlin’s skeleton reports that it the fish is 18 feet long. It is a clear evidence of the largest fish the villagers have ever known of coming out of the bay.  And when Manolin accepts the spear of marlin, he accepts everything Santiago wants to give him in his life.

Manolin is a young boy who goes fishing with Santiago. Since he is not able to catch any fish, his parents put Manolin with another fisherman. The bond that the two share is still strong, despite the circumstances. Manolin prepares food for Santiago, helps him with his tools. Santiago tells stories of his adventures to Manolin and they always mesmerize him. Manolin deeply cares for Santiago and tries to follow his teachings. Santiago feels that Manolin is his last true relationship that has feelings and depth in it. He takes him as his own replacement after death in the human cycle. That is the reason why Santiago wants to teach his skills, talent, and vision to Manolin, so the young boy can carry on his legacy.

Through the whole novel, Manolin has expressed his trust on Santiago more than three times. At last, when he accepts the spear of Marlin, it shows that Manolin has trust in Santiago’s skills. It is also a sign that he will carry on his legacy and whatever he wants to teach him.

About Authoress: The article “main characters and their analysis in The Old Man and the Sea” was written by Sayeda Javaria. (javaria.hanan@gmail.com).