Symbolism in The Old Man and the Sea 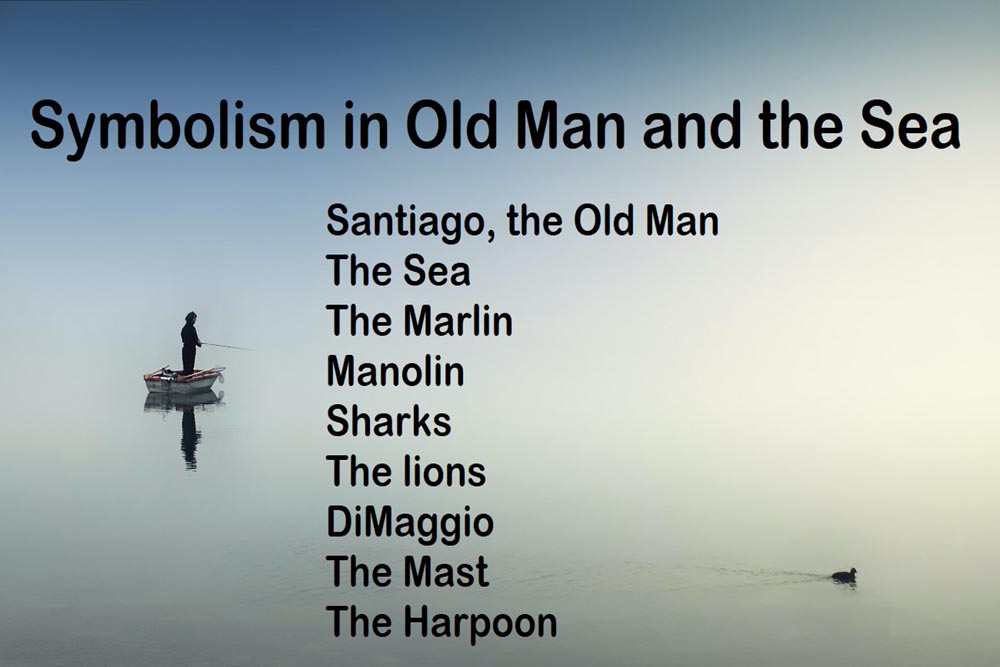 What is a symbol and what is symbolism?

A symbol is something that gives a certain meaning to an action, person, place, word, or thing in a piece of literature.  Story-writers use symbolism to form a view of emotions or moods rather than just saying them plainly. Main symbols in The Old Man and the Sea are: Marlin, dreams, loins, sea, mast, shark, harpoons, bird, bear, and cottage.

Main symbols in  The Old Man and the Sea

Santiago, the Old Man : The Symbol of Courage

The old man is compared to Christ in a religious manner, in terms of stamina and endurance. He is a teacher like Christ who teaches Manolin to fish, and the way he is humble. Repeatedly, it is demonstrated that the old man is a symbol of Christ with the way he fights the marlin. Later on, he also survives the shark’s attacks.

The Sea : Life and Struggle

The sea is a main symbol in Old man and the sea that symbolizes life and the struggles that every person is bound to endure. According to Hemingway, man is the most worthy in isolation because he has to work and survive on his own. The sea, in the novel, is a sign of life and Santiago’s isolation in the universe. As we can see that in the sea, there is no help or laws at all. Santiago faces his ultimate challenge all alone and survives. The novel, in this regard, is an example of Naturalism in Literature.

The Marlin : Symbol of Dignity and Pride

The Marlin is a good opponent of Santiago, worthy of fight. It is a symbol of dignity and pride. The Marlin is in contrast to the sharks that are shameful rivals, not commendable to Santiago’s endeavors. Magnificent and radiant, the Marlin represents a perfect rival. In the world’s reality where, “Everything kills everything else in some way”, Santiago feels truly fortunate to wind up against an animal that draws out the best in him. The Marlin brings out his qualities of courage, talent, fortitude, love, and regard.

Manolin symbolizes pure love, compassion, and circle of life. He dearly loves Santiago and cares for him. Between Manolin and Old Man, there is a vast age difference. It symbolizes their skills of fishing. One day Manolin will be able to reach that point and carry Santiago’s legacy. Manolin is the symbol of hope.

The sharks in the Old Man and the Sea symbolize the obstacles in life and the labour against them. Sharks are the opposite of the marlin. For Santiago, the sharks are vile predators, that are not worthy of admiration or glory. They are like detrimental energies that promote no other purpose in life.

The lions in the story symbolize youth of the old man. They are a symbol of vitality. At the end of the novel, when Santiago dreams of the lions, it represents the hope of eternal life, of freedom and youth. Because of the qualities of strength of lions and their proud, the writer has used them to represent childhood days of Santiago. Lions are a symbol for his might and pride in days of his youth. Just as Santiago hunts the Marlin, lions are also mighty creatures and hunters.

DiMaggio symbolizes the value of enduring through pain and suffering. He is a Symbol of motivation to keep Santiago on his feet. DİMaggio is a true representation of Santiago’s talent, pride, and ethics. He is also a sign of hope for the old man. Santiago desires that Manolin will grow up to become like the great DiMaggio, strong and young. He does not want him to be like him, a poor fisherman.

The Mast is a symbol and represents as the cross of Jesus. The mast stands on Santiago’s skiff. It is similar to the cross because of the way Santiago suffers. He goes three days with painful injuries to the palms of his hands as Jesus did and to his back as well.

While fighting off sharks, Santiago loses his Harpoon. It is a symbol for those who lose faith, and doubt everything in their life. When life tests them with struggles, they lose hope, as Santiago is without his harpoon, defenceless. People are exactly like that without faith.

There are many other symbols in Old Man and the Sea but due to less usage of those symbols, they are not discussed here.

About Authoress: The article “Symbolism in The Old Man and the Sea” was written by Sayeda Javaria. (javaria.hanan@gmail.com).