Quotations in The Old Man and the Sea 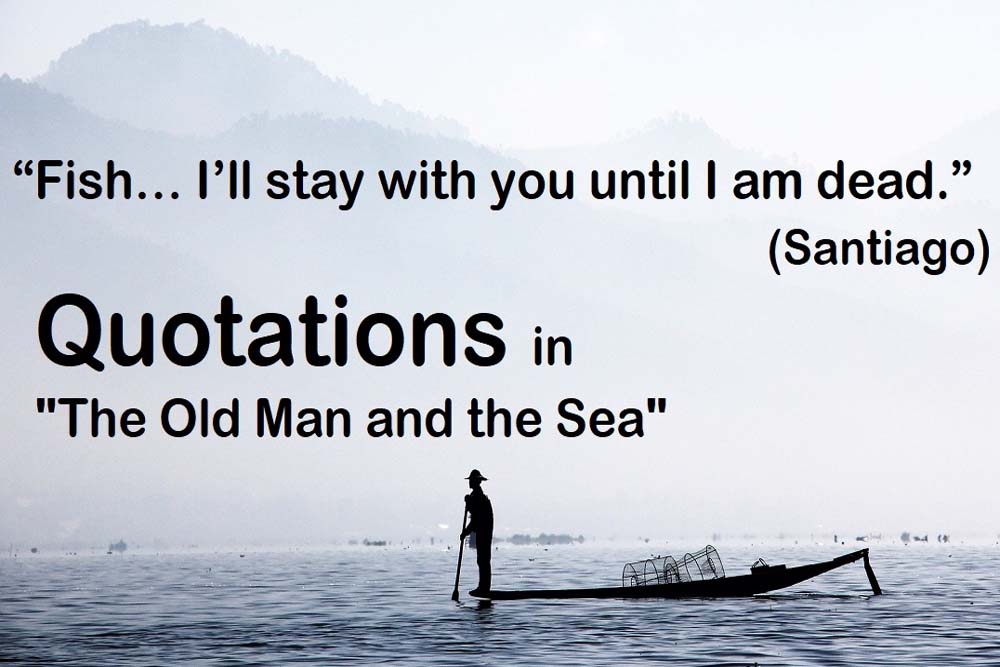 Quotations in “The Old Man and the Sea” are listed below with explanations.

Santiago spoke these lines in his shack to Manolin, when they were having a conversation about baseball.

Santiago’s appreciation and love for baseball is clearly showing in his words. He especially admires DiMaggio because of his great playing skills and energy in the field.

2.    “There are many good fishermen and some great ones. But there is only you.” (Manolin)

Spoken by Manolin, these words were for Santiago. While going to bed, Santiago said that he knows many fishermen who have great skills and are much better. Manolin compares him to DiMaggio and tells him that he is unique just like him. He is a different fisherman who has respect for the sea and a deep relationship with it.

3.    “They are good… They play and make jokes and love one another. They are our brothers like the flying fish.” (Santiago)

Santiago is talking about the porpoises here. They always come to the side of his boat at night. He feels lonely at times, thinking that no one should be like this in his or her old age. He wants Manolin to be on his boat, fishing with him but he is unable to do so. The porpoises are a sign of love for him. They come as a couple, which provides strength to Santiago and soothes him. He considers them as his brothers as he considers every other creature in the sea his brothers, especially the fish.

He says this line to the fish marlin that he hooks. He knows that it is an extremely strong one. It will not be easy for him to trail the fish around until it dies by losing strength. Santiago expresses his determination by saying that either he will catch the fish or they will both die doing so.

5.    “Fish… I love you and respect you very much. But I will kill you dead before this day ends.” (Santiago)

Santiago’s heart goes out to the sea creatures but he has no choice. He needs to kill the marlin to prove and restore his identity back as a fisherman. He considers the marlin as equal in a battle of uncertainty. He does not know if he will survive it, but is still determined to stay with the marlin. He will keep trying until he kills it.

Manolin says this to Santiago after Santiago returns home, having lost the fish and slept through the night. In the morning, Santiago tells Manolin, “They truly beat me”. He is talking about the sharks that ate the fish after he caught it. It was not the fish who beat him. The fish and he were brothers in his eyes, and he feels like he has somehow betrayed the fish by letting it be eaten by the scavenging sharks.

7.    “I didn’t know sharks had such handsome, beautifully formed tails.” (A female tourist)

Almost at the end of the story, there is a female tourist examining the skeleton of marlin. She asks a nearby waiter in wonder what it is. He tells her “Eshark”, meaning that sharks ate it. She takes it as the skeleton being a shark, which is why she says those lines. It shows how less an average person knows about the creatures out there in the sea.

Santiago says this to Manolin after they finish up a day of fishing on separate boats. It is meant as an explanation for how his eyes remain so good after going turtle-ing for so many years. Often he searches and searches but returns without a fish. It also shows how strong he is while wrestling the marlin and strange in a manner that he never loses faith and will to go on.

He considers himself strange because of his bond with the sea creatures.

He says this to Manolin after Manolin warns him to keep himself warm, since it is September. It is more difficult to be a fisherman when it is cold outside, but Santiago is up for the challenge.

He means that everyone can go fishing in the month of May because it is warm and easy. The actual challenge comes when the winter sets in. That is when an actual fisherman goes fishing.

He says this aloud to himself while trailing the marlin with his boat, waiting for it to give up. He is determined to be “worthy of the great DiMaggio”, who is able to play baseball even with a bone spur. He suspects that the sharks will soon smell the marlin’s blood. They are surely going to come for its meat once they find the marlin. He sort of prays in this line.

Santiago says this when his community starts calling him unlucky. He believes that his success has nothing to do with luck. He has complete faith in his skills and talent through which he can easily turn the things around in his favor. If he goes fishing with the right knowledge, and uses it to his advantage, he will surely catch a fish.

12. “All my life the early sun has hurt my eyes. Yet they are still good.” (Santiago)

Fishing took a toll on Santiago. He says this to show the readers how he keeps going even after he endured the hardships being in the sea and under the bright sun. The early sunrays always hurt his eyes but he is proud that they are still fine.

Santiago says this aloud, thinking that if Manolin were with him, he could show him everything. He could prove that he was still a good fisherman.

14. “A man can be destroyed but not defeated.” (Santiago)

Somewhat defenseless after having lost his harpoon when protecting his catch from the sharks, the old man shows that an individual’s willpower and resourcefulness will ultimately help him persevere. He says that to show his determination that even if he lost his harpoon, his defense mechanism, he is still not going to give up.

Santiago concludes that hope is everything. When everything goes wrong and there is nothing that you have, hope is still there. It is an ever-present feeling for him that things will be normal again. Hope is eternal and ultimately leads to triumph.

About Authoress: The article “Quotations in The Old Man and the Sea” was written by Sayeda Javaria. (javaria.hanan@gmail.com).