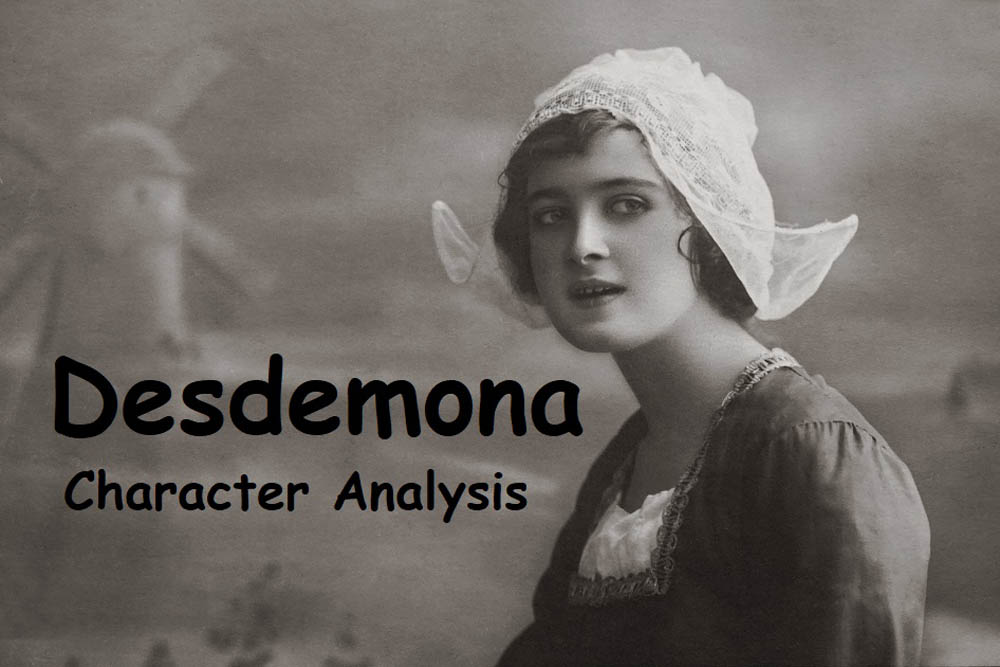 Desdemona: A Heroine of the Play

Desdemona is a heroine in Shakespeare’s Othello. She is the daughter of the respected Venetian Senator Brabantio. Desdemona is one of the most pitiable victims among English heroines. Encompassing all the good traits, a lady of spirit, intelligent, devoted, a loving wife, but she fails to justify her love to her husband and is murdered by her husband in a fit of jealous rage. Desdemona is one of the most direct and honest speakers throughout the whole play. Her speeches are short but carry worth unlike other characters as soliloquies of Iago or Othello that are much longer compared to Desdemona’s speeches.

Desdemona is an embodiment of all the good traits. All the characters of the play are well familiar with her characteristics even the villain of the play Iago names her “fair Desdemona”. Othello was not only impressed by her beauty but her other kind traits attracted him to marry her. Othello names her “gentle Desdemona”.

Throughout the play, her name is invariably accompanied by kind and good personality adjectives. Cassio also calls her “divine Desdemona” and “virtuous Desdemona” while Desdemona’s maid, Emilia refers to her as “sweet Desdemona”.

When Cassio was removed from his post and requests Desdemona to request from Othello on his behalf to restore his position she replies:

“Do not doubt, Cassio, But I will have my lord and you again, As friendly as you were.”

I do perceive here a divided duty:

To you I am bound for life and education;

My life and education both do learn me

How to respect you; you are the lord of duty;

I am hitherto your daughter: but here’s my husband,

And so much duty as my mother show’d

To you, preferring you before her father,

So much I challenge that I may profess

Due to the Moor my lord.”

Desdemona’s Love Story: Blossom for a while

After announcing marriage, everything goes on happily for some time and their relationship continues to bloom for a while. Their romance is spoiled very soon by Iago when he decides to doom their relationship by his web of intrigues. Some chance happening aided Iago’s plan and he wins to make Othello suspicious against Desdemona’s fidelity.  Othello also loves Desdemona sincerely, but he cannot share her.

Desdemona herself is not so clever so that she can judge the plan of Iago. Now her lover does not love her like he did when they had newly fallen in love. Seed of suspicion in mind of Othello grew very soon and became jealous of Cassio’s courting with Desdemona (although it was not true). She is clueless why she has lost Othello’s trust and become an object of his suspicion. Othello is brave but not wise enough to explore Iago’s intrigue web.

Desdemona dreams of leading a peaceful and romantic life were spoiled because Iago is still behind them trying to spoil their life to take revenge from Othello for not promoting him. Desdemona has some clue that there is something going wrong between her and her husband but her innocence and complete devotion to her love made her helpless.

Desdemona wins the sympathies of the audience’ for her goodness because of her virtuous nature. She tried her best to clear things but because of her innocence she cannot prove her fidelity before Othello. He is Iago who skillfully manipulates the entire play using every character in his own way. Desdemona is still ignorant that someone is plotting against her but she believes in her love and hopes things will get fine again.

Desdemona died the undeserved death which makes her an innocent victim of others wrongdoings. Iago and Othello are equally responsible for her death who paid for what they did. Desdemona is just made to pay for having fallen in love with an adventurous military general, Othello.

Desdemona remained a submissive character throughout the play, most notably in her willingness to take credit for her own murder. When Emilia asks her, “O, who hath done this deed?” In response to Emilia’s question Desdemona’s last words are, “Nobody, I myself. Farewell. / Commend me to my kind lord. O, farewell”.

“His unkindness may defeat my life, But never taint my love.”