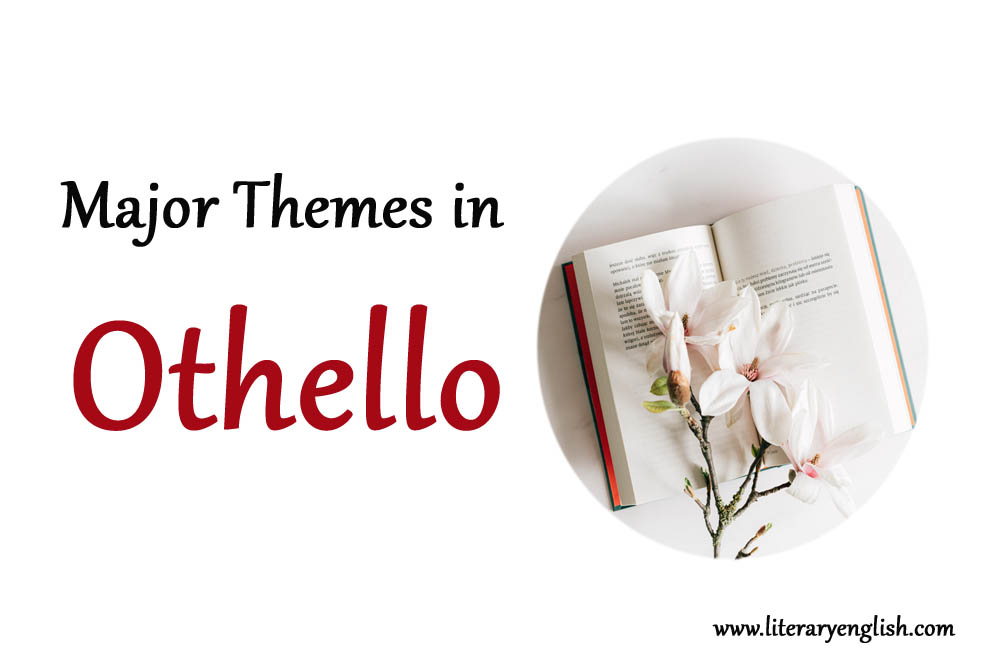 The play Othello is a domestic tragedy and involves happening of individual characters. The themes in Othello are linked with individual characters ranging from hatred to love, jealousy to revenge, service to betrayal, and innocence to guilty. Major themes In Othello are love, jealousy, racial prejudice, appearance versus reality, expectations versus outcome and intrigue.

Theme of love in Othello

The marriage of Othello and Desdemona was based on true love but Othello fails to recognize love of her wife, Desdemona, shortly. Initially Othello believes that he is devoted to love but he is defeated in love at the end. He has achieved many victories in the battlefield but in his own home, he loses the battle of love. His enemy, Iago, spoiled his love and he became an easy prey for Iago. It was only due to his wrong judgment and believing Iago without any confirmation.

Desdemona’s love in friendship for Cassio is real because she knows that Cassio and Othello are best friends from a long period but the jealous Othello interprets it as adulterous love. We witness Emilia’s true love in friendship for Desdemona. She stood up to witness for the honor of her dead mistress against her own lying husband, Iago, and was killed for her love for her mistress. Iago uses the word “love” in a wider and falser manner than the others. Iago even says he loves Desdemona but his intentions were different from others, he could feel some sexual attraction for her. For Iago, love is nothing but leverage.

Theme of jealousy in Othello

The demise of the Othello is based on Jealousy that results what Iago wants. What Iago reveals about the jealousy is, “O beware jealousy; / It is the green ey’d monster, which doth mock / That meat it feeds on” (Act III. scene3, lines 169–170). Iago thinks he knows about jealousy, but his jealousy is not strong as compared to the storm of jealousy he stirs up in Othello. Iago was not aware that his seed of jealousy grown in mind of Othello would grow into very poisonous oaks. Othello’s jealousy was like a furious storm from where escape was not possible. The peak of jealousy was only based on one idea, the idea that his wife, Desdemona, has betrayed him with Cassio, that no other explanation or assurance can penetrate. Jealousy drives him so mad that he cannot stop himself to kill his own beloved wife. Iago avails every chance to raise his jealousy by adding more lies and manipulating those lies into reality for him and he was not aware about motives of his so-called Honest Iago.

Theme of racial prejudice in Othello

Racial prejudice plays an important role in the play and one of the major themes in Othello. We can guess from the view of Brabantio when he says, a Moor (Othello) cannot win a heart of a girl like Desdemona (a Venetian girl) but she was seduced by witchcraft that shows Venetian society has racial prejudice. Desdemona is aware of racial prejudice but she is in true love with Othello and marries him. On the other hand, Othello was also aware with this racial prejudice and he suspects how a girl can be in love with him like Desdemona when seed of jealousy grow in mind of Othello manipulated by Iago. Prejudice was penetrated deeply into the personality of Othello and this absorbed prejudice undermines him with thoughts like “I am not worthy of Desdemona,” “I am not attractive,” “It cannot be true that she really loves me,” and “If she loves me, then there must be something wrong with her.” These thoughts were fixed into the mind of Othello by intrigues of Iago. Half spoken sentences of Iago and his comments on Cassio, when he was meeting with Desdemona, mad Othello mad.

Theme of appearance versus reality in Othello

Appearance and reality is also a significant theme in Othello. Othello demand proofs and these proofs ruined his life. Othello demands for proof form Iago and say: “Villain, be sure thou prove my love a whore, be sure of it, give me the ocular proof” (act III, scene 3, pages 365–366). How Iago makes him fool by providing fake proofs and Othello believes blindly without exploring for truth and reality. Othello did not believe on Emilia when she justifies true love of Desdemona and believes on Iago considering him his best friend. How Othello believes on fabricated and manipulated story of handkerchief without asking true story from Emilia when he asks from her about Desdemona. How Iago was enemy and how Othello considers him true friend. How Cassio was sincere to Othello and what Othello thinks about him. How Desdemona was pious in love with him and how Othello sees her. Othello fails to judge reality everywhere and push himself into unending jealousy.

Theme of expectations versus outcome in Othello

We can see that what expectations before marriage of Desdemona and Othello were, and how these expectations turned into demise after their marriage. What were the motives of Iago, and how much he succeeded? How Iago plans to remove Cassio from his post and how he receives a good post at the end? We have also seen that how Emilia was loyal to her mistress, and what she receives in her loyalty. She receives painful death by her own husband in regard of her loyalty to her mistress even after her death. How Othello planned to kill Desdemona and how he kills himself after knowing the reality? How Roderigo attacks Cassio to remove him from his way, and how Iago kills him to make his own way clear? Nothing happened in the play as per expectations but we observed that which was unexpected.  On every scene audience were shocked to know something different from expectation.