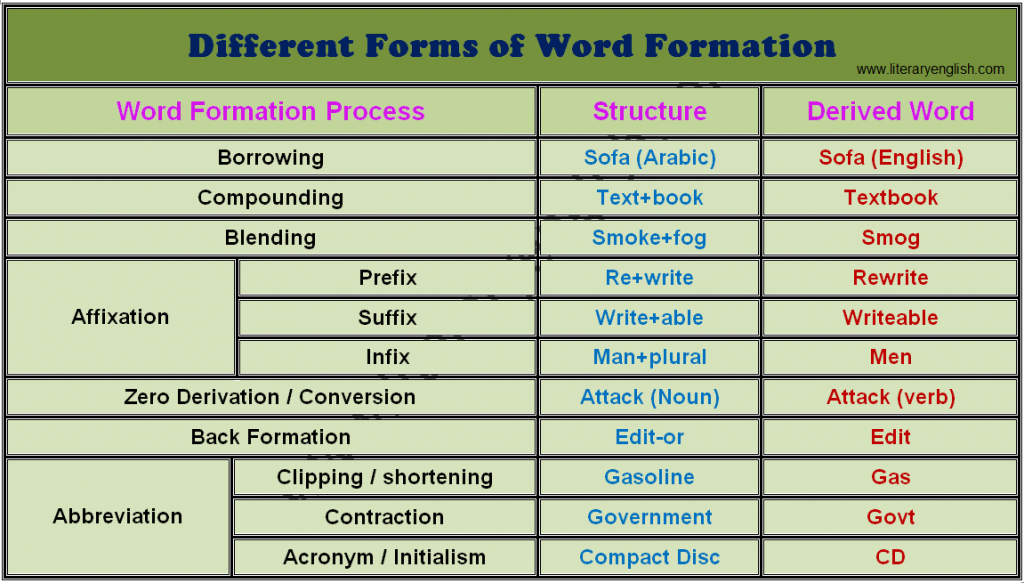 What is Word Formation?

Common examples of word compounding are:

In word formation process, borrowing is the process by which a word from one language is adapted for use in another language. The word that is borrowed is called a borrowing, a loanword, or a borrowed word. It is also known as lexical borrowing. It is the most common source of new words in all languages.

Common Examples of borrowed words in English language are:

Blending is the combination of two separate words to form a single new word. It is different from compounding where we add two words side by side to make a new word but in blending we do not use both words in complete sense but new/derived word has part of both words e.g. word smog and fog are different words and when we blend them to make a new word, we use a part of each word to make a new word that is smog. We took first two letters from first word (sm) from smoke and last two (og) from fog to derive a new word smog.

Some more examples of blending are:

Abbreviation is a process where we create a new word by making a change in lexical form of a word keeping same meaning. There are three main types of abbreviations.

Here are some examples of clipping:

An acronym is a word or name formed as an abbreviation from the initial letters in a phrase or a multi syllable word (as in Benelux). The initials are pronounced as new single words. Commonly derived word are written in upper case e.g. NATO.

Some common examples of acronyms are:

·         NASA is acronym of National Aeronautics and Space Administration

·         Laser is acronym of Light Ampliﬁcation by Stimulated Emission of Radiation

A contraction is a word formed as an abbreviation from a word. Contractions are abbreviations in which we omit letters from the middle of a word or more than one words.

Some common contractions are below:

Affixation is the word formation process where a new word is created by adding suffix or prefix to a root word. The affixation may involve prefixes, suffixes, infixes. In prefixes, we add extra letters before root word e.g. re+right to make a new word rewrite. In suffix, we add some extra letters with a base/root word e.g. read+able. In infixes, the base word is changed in its form e.g. the plural of woman is women that creates new word “women”.

Zero-derivation, or conversion, is a derivational process that forms new words from existing words. Zero derivation, is a kind of word formation involving the creation of a word from an existing word without any change in form, which is to say, derivation using only zero. Zero-derivation or conversion changes the lexical category of a word without changing its phonological shape. For example, the word ship is a noun and we use it also as a verb. See below sentences to understand it.

1.    Beach hotel has a ship to enjoy honeymoon.

2.    Beach hotel will ship your luggage in two days.

Backformation is the word formation process where a new word is derived by removing what appears to be an affix. When we remove last part of word (that looks like suffix but not a suffix in real) from a word it creates a new word.

Some very familiar words are below:

It is also a process of word formation where new words (either deliberately or accidentally) are invented. This is a very rare process to create new words, but in the media and industry, people and companies try to surpass others with unique words to name their services or products.

In word formation process, sometime new words are derives by based on the name of a person or a place. Some time these words have attribution to a place and sometime the words are attributes to the things/terms who discover/invent them. For example, the word volt is electric term that is after the name of Italian scientist Alessandro Volta.

Some common examples of eponyms are:

·         Fahrenheit:  after the name of German scientist Gabriel Fahrenheit