What is a Morpheme in Morphology? 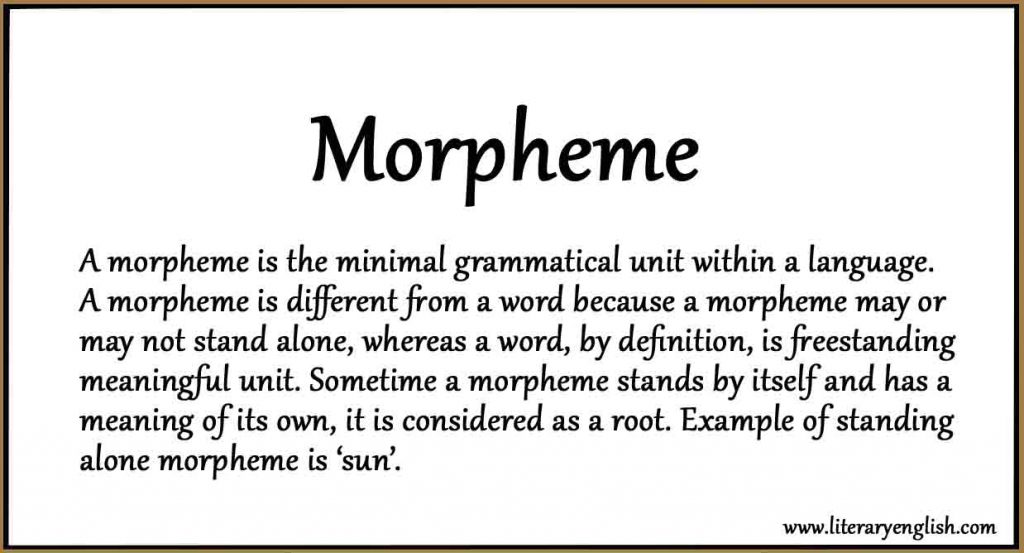 What is a Morpheme in Morphology?

A morpheme is the minimal grammatical unit within a language. A morpheme is different from a word because a morpheme may or may not stand alone, whereas a word, by definition, is freestanding meaningful unit. Sometime a morpheme stands by itself and has a meaning of its own, it is considered a root. Example of standing alone morpheme is ‘sun’.

Every word comprises one or more morphemes. A standalone morpheme and a word are identical but when a root word becomes modify with addition of affixes, it becomes word only.

Look at the examples:

The root is walk is stand alone morpheme and a word at a same time.  When root word was modifies with affixes like -s, -er, -ed and –ing it became a word consisting of two morpheme in each word.

There are two main types of morphemes: Bound morphemes and free morphemes.

Segments that cannot stand alone and occurs with another segment are called Bound Morphemes. Bound morphemes are generally comprised of afﬁxes: preﬁxes, sufﬁxes and infixes. Some examples of bound morphemes are:

An inflectional morpheme is a suffix that is added to a word to assign a particular grammatical property to that word. For example, liste +ing = listening or boy+s = boys. They do not change the essential meaning or the grammatical category of a word..

There are two sub-categories of free morphemes that are; functional morphemes and Lexical morphemes.