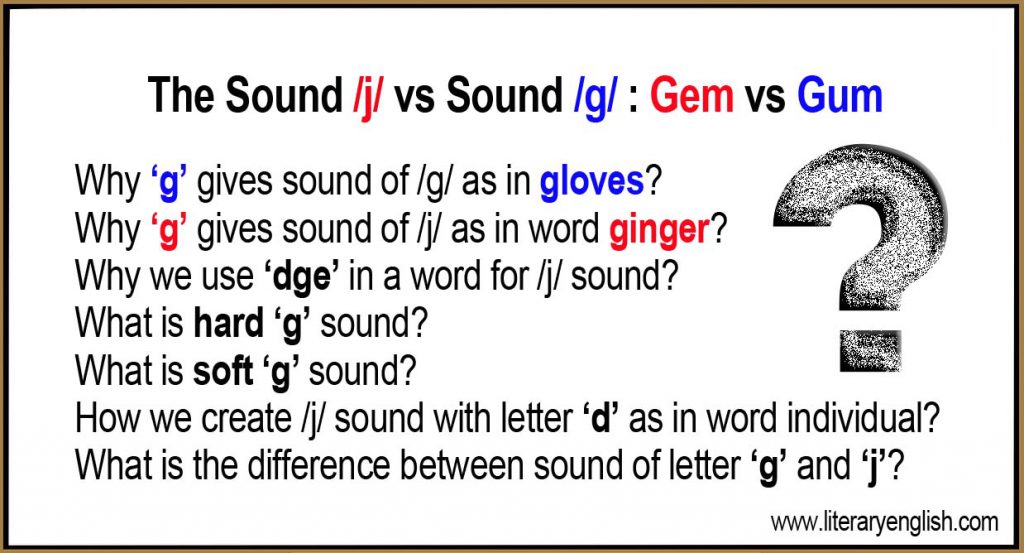 There are some guidelines that help the readers to understand the difference between these two sounds of letter. But not all words conform to the guidelines because there are exceptions. In mastering English spelling, a sensible approach is required to learn the general rules and keep in mind the exceptions.

Regarding two different sounds of letter g in a word, many questions arise in the mind of the readers. Below are the some questions and confusions that will be discussed in this session.

How we create /j/ sound with letter d as in word individual?

What is the difference between sound of letter ‘g’ and ‘j’?

The sound /j/ can be spelled either with letter ‘j’ or ‘g’. There are no clear rules to define the sound of /j/ but we can guess it by some hints. But these hints are not 100% perfect, sometime there are exceptions and these exceptions are explained at the end of the article.

The word Juice and Ginger start with sound of /j/ but initial letter is different in both words.

We will discuss both letter and their sounds individually in a word.

Generally, when the sound /j/ is followed by a vowel ‘e’, ‘i’ or ‘y’; we use letter ‘g’ to produce /j/ sound in a word that is often derived from Greek or Latin (these languages do not use the letter “j” to represent the /j/ sound). Look at the examples given below.

Exceptions to the e, i, y Rule

Words of Germanic origin where letter ‘g’ followed by e, i, y has hard /g/ sound: give, gift, gild, get, Gilda.

Most English words that derive from the Greek word for woman [gyne] follow the rule for g followed by y and are pronounced with a “hard g,” for example, Gynecology

Below are some examples.

When a consonant letter is followed by letter g, it will give hard /g/ sound as in the given below examples

When the sound /g/ is at the end of word, the letter g will give hard sound. Look at the given examples.

Sometimes a letter u follows letter g in word to keep it from bumping up against an i or an e to keep its hard sound. Same is in the case with examples given below.

Download pdf Book PARTS OF SPEECH
Back to Home Page