Summary and Analysis of Still Citizen Sparrow by Richard Wilbur

Introduction to the Poem Still Citizen Sparrow by Richard Wilbur

Richard Wilbur, one of the most famous poet of the 20th century, is known for his diversity and complexity in poetry. Realism is one of the basic components of his work. “Still Citizen Sparrow” is written to change the beliefs and the perceptions of the people of the modern world who disregards the vulture because of its ugliness but are in awe of the sparrow because of its beauty and sweet songs. The poet here seems to be against the stereotypical mind-set of people and is of the view that vultures might be displeasing to the eye but are useful as it helps the environment in getting rid of filth and waste, while the sparrow does nothing but seeks its own survival. 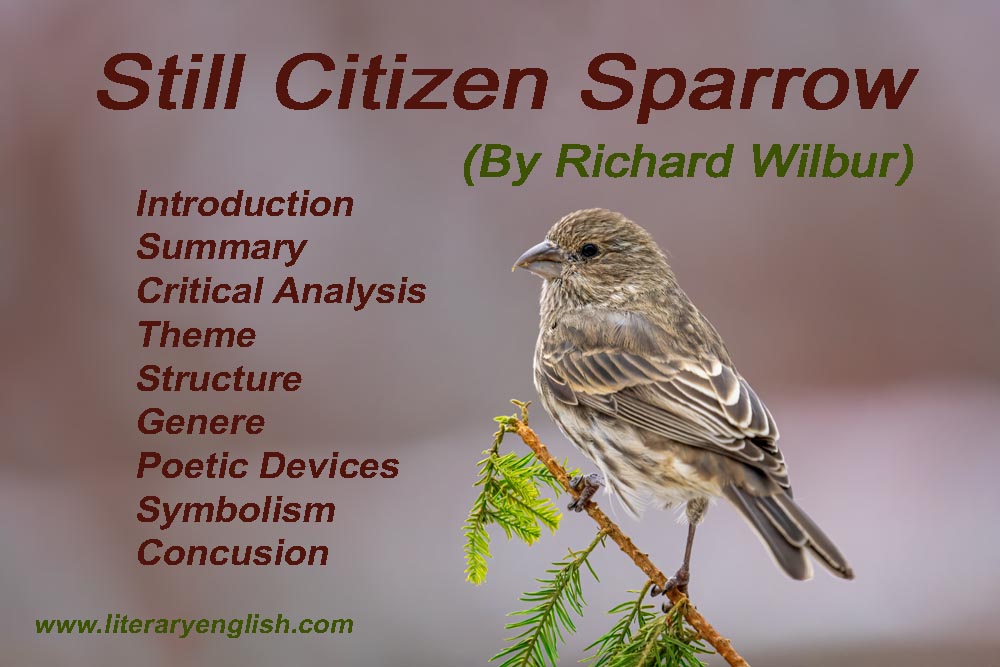 Still, citizen sparrow, this vulture which you call

Unnatural, let him but lumber again to air

Over the rotten office, let him bear

The carrion ballast up, and at the tall

Tip of the sky lie cruising. Then you’ll see

That no more beautiful bird is in heaven’s height,

He shoulders nature there, the frightfully free,

The naked-headed one. Pardon him, you

Who dart in the orchard aisles, for it is he

Has heart to make an end, keeps nature new.

How for so many bedlam hours his saw

Soured the song of birds with its wheezy gnaw,

And the slam of his hammer all the day beset

The people’s ears. Forget that he could bear

How high and weary it was, on the waters where

He rocked his only world, and everyone’s.

Forgive the hero, you who would have died

Gladly with all you knew; he rode that tide

To Ararat; all men are Noah’s sons.

O you beautiful sparrow that lives in a city but is of no use! You call this vulture uncivilised and ugly but you have seen him flying in the air, cleaning the world from filth of dead and the rotten. You are wrong if you think low of him, it can fly high and tall in the air like no other bird can. If you watch him closely, you’ll know how beautiful it is, not just beautiful but the most beautiful bird flying in the sky. Its wings are precious and admirable. It is responsible for it keeps the environment clean. Even though he is not very pleasing in appearance but still, he is free. You, on the other hand, fly around the beautiful trees in the gardens, but it is this vulture that eats the rotten and dead, it is him that keeps the beauty of nature intact and doesn’t let anything spoil it. This vulture has a beautiful heart, beautiful than your appearance. Think of what this vulture had done for Prophet Noah. The noise that Noah’s saw made was neither pleasing for the singing birds like you nor was it for the human ears. It was this vulture that helped him. Forget that Noah could see his town drowning in the water when he was in his ark, forget the dark drowned fields in the depth of the water. Instead, think of how Noah helped all the living things when the entire world was in distress, vulture was amongst them. Leave this vulture alone, for it is brave enough to bear those hardships and reach Ararat, which you could never have.

The central idea of Still Citizen Sparrow is based on the proverb “All that glitters is not gold”. It is about the judgemental society that judges people on the basis of their appearances rather than their skills, efforts and abilities.

The poem Still Citizen Sparrow is divided into six stanzas. Each stanza is made up of four lines, making it a quatrain.

Note: Allegory is a story, picture or poem which has a hidden story in its surface story.

Still Citizen Sparrow is an allegory, a symbolic fictional narrative. It appears to be a story about a sparrow and a vulture, but it is actually an emphasis on the beliefs of a society based on which they declare people or nations as civilized or uncivilized.

POETIC DEVICES USED IN THE POEM

Poetic devices enriches and elevates poems from a mere piece of text to a beautiful piece of art. The poem “Still Citizen Sparrow” is rich in poetic devices such as, symbolism, alliteration, consonance, assonance, imagery and metaphor.

Symbolism is the use of words, people, places, things, ideas and even animals to represent something else. In this poem, the vulture symbolises the lower class people, who put a lot of efforts in their work. The sweepers, for example, are the ones who helps in keeping the world clean but are still regarded as filthy and uncivilized. The sparrows symbolises the upper class people, who are considered worthy and respectable, even if they don’t contribute in bringing good to the world.

Alliteration is the repetition of first sound of words closely placed together in a line. There are many examples of alliteration in this poem, such as

That no more beautiful bird is in heaven’s height,

Sound of letter “b” and “h” is repeated

He shoulders nature there, the frightfully free,

Sound of letter “f” is repeated

Sound of letter “d” and “m” is repeated

How high and weary it was, on the waters where

Sound of letter “h” and “w” is repeated

Sound of letter “f” and “d” is repeated

Consonance is the repetition of consonant sounds in words closely placed together in a line. The use of this specific poetic device can be seen in the following lines of the poem

Sound of letter “d” is repeated

Sound of letter “s” and “l” is repeated

Assonance is the repetition of vowel sounds in words closely placed together in a line. Assonance in the poem can be seen in

Sound of letter “e” is repeated

The use of five senses and colours, that creates images in the readers’ mind is known as imagery. For example, Wilbur has evoked the thoughts and feelings of the readers in the following lines

The people’s ears. Forget that he could bear

And the fields so dismal deep.

Metaphor is comparison of two things without using like or as. The poet here has compared the vulture with Noah, for a vulture is as hardworking as Noah was and has compared the sparrow with a child who is unable to take care of himself, let alone bringing good to the world.

Through this poem, the poet has tried to make people believe in the inner beauty, in the hard work of the people instead of blindly following those who are considered superior. The poet wants people to reflect on their thoughts and think for themselves, is it the vultures that the world needs the most or the sparrows.