Summary and Analysis of After The Last Bulletin by Richard Wilbur

Introduction to the poem | After the Last Bulletin

Richard Wilbur is one of the most famous modern poets whose subject is mainly the philosophy and psychology of human race. Although he falls into the category of modern poets, he was not in favour of modernism. According to Wilbur, human beings are eager to gain knowledge and information about the world, about other people, but soon they choose to put all that knowledge and information to waste. The news that they are interested to know would carry no weight after some time.

The poem, After the Last Bulletin by Richard Wilbur, explains the exact same psyche of human mind. A newspaper is taken as an example here. People are keen to read what is written in it. They are eager to know the breaking news early in the morning. The news, the stories, the content is warmly welcomed in the beginning but as soon as one finishes reading it, the newspaper becomes old and useless and is thrown away. The news that was once significant carries no value after being read. It is then considered worthless. 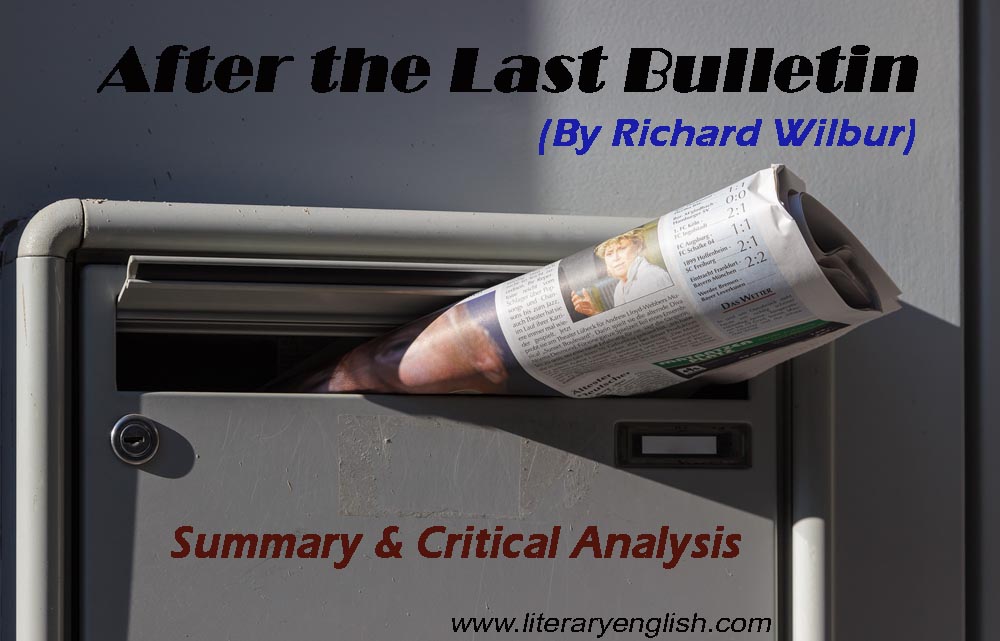 Text of the Poem | After the Last Bulletin by Richard Wilbur

After the last bulletins the windows darken

And the whole city founders readily and deep,

Sliding on all its pillows

To the thronged Atlantis of personal sleep,

The day’s litter of news in the alleys. Trash

Tears itself on the railings,

Strike at the positive eyes,

Batter and flap the stolid head

And scratch the noble name. In empty lots

Our journals spiral in a fierce noyade

Of all we thought to think,

Or caught in corners cramp and wad

And twist our words. And some from gutters flail

Damn you! damn you! to the emperor’s horse’s heels.

Oh none too soon through the air white and dry

Will the clear announcer’s voice

From the heart’s anarch and responsible town

Return by subway-mouth to life again,

And cross the park where saintlike men,

White and absorbed, with stick and bag remove

The litter of the night, and footsteps rouse

The songbirds in the public boughs

Summary of After the Last Bulletin by Richard Wilbur

The lights are switched off and the people who makes the news and those who publish it are now ready to drown in their personal Atlantis of dreams. They have put their heads on the pillows and are ready to sleep peacefully after finishing their work. Outside their houses, the wind is howling and is blowing the newspapers in the alleys which now has become a trash. The newspapers are bashing themselves against the railings. They fall on to the ground and rises up in the air again. They bash themselves against the historic statutes of the noble people in the park. Apart from the newspapers, journals are also blown by the wind in the streets. They too are of least importance as the newspapers. Some of them are stuck in the gutters while others are crushed beneath the footsteps of patrolmen who are walking in the streets. Those who deliver the newspapers will be called upon the emperor’s announcer and will be asked to deliver the newspapers again. They will have to travel through subways and pass through the middle of the town, carrying the newspapers for distribution. They also will be crossing the park where the cleaners will be cleaning the trash from the last night. The day will begin and people will awaken to the sound of the chirping birds.

Main Theme of After the Last Bulletin

The main idea of the poem is how human beings discard things when they no longer are interested in it. The history that was once significant is now forgotten and thrown away.

After the last bulletin is divided into eight stanzas. Each stanza is made of four lines, which makes it a quatrain. The poem also is written in First Person’s Perspective.

Rhyme Scheme of After the Last Bulletin by Richard Wilbur

After the Last Bulletin follows a specific rhyme scheme where the second line and the fourth line of each stanza rhyme with each other throughout the poem. The poem follows a rhyme scheme of abcb.

After the last Bulletin is a lyric poem because it expresses the thoughts and the emotions of the poet. It also has a musical feel to it because of the consistency in the rhyme scheme of each stanza.

Poetic devices are one of the main components of poetry, on basis of which a prose can be differentiated from a poem. After the Last Bulletin is rich in poetic devices, making it a beautiful piece of art. Poetic devices used in the poem are metaphor, simile, personification, repetition, alliteration, assonance and consonance.

Metaphor is comparison of two unlike things without using like or as. In the first stanza the poet has compared deep sleep with a thronged Atlantis.

Simile is comparison of two unlike things by using like or as. In the fifth stanza, the poet has compared newspapers with the fisted snow by using like.

And twist our words. And some from gutters flail

The phrase “The wind rises” is repeated twice in the first line of second stanza.

There is also a repetition of the phrase “Damn you!” in the first line of the sixth stanza.

Alliteration is the repetition of first sound of closely placed words within a line. Many examples of alliteration can be seen in the poem. For example,

The sound of letter “s” is repeated

And scratch the noble name. In empty lots

The sound of letter “n” is repeated

Of all we thought to think,

The sound of letter “t” is repeated

Or caught in corners cramp and wad

The sound of letter “c is repeated

And some from gutters flail

The sound of letter “f” is repeated

Assonance is the repetition of the vowel sounds in words closely placed to each other in a line. Examples of alliteration can be seen in the fifth and sixth stanza of the poem,

The sound of letter “a” is repeated

Oh none too soon through the air white and dry

The sound of letter “o” is repeated

Consonance is the repetition of the consonant sounds in words closely placed to each other in a line. The sound of the letter “t” is repeated in the following line,

Their tatters at the tired patrolman’s feet

Tears itself on the railings,

Strike at the positive eyes,

Batter and flap the stolid head

And scratch the noble name.

After the last bulletin is a beautiful poem about the bitter reality of human race. It explains the philosophy of discarding the history and the important things. The knowledge and the information is important as long as one doesn’t know about it. Once the curiosity ends, people do not pay any heed to what they have in hand.