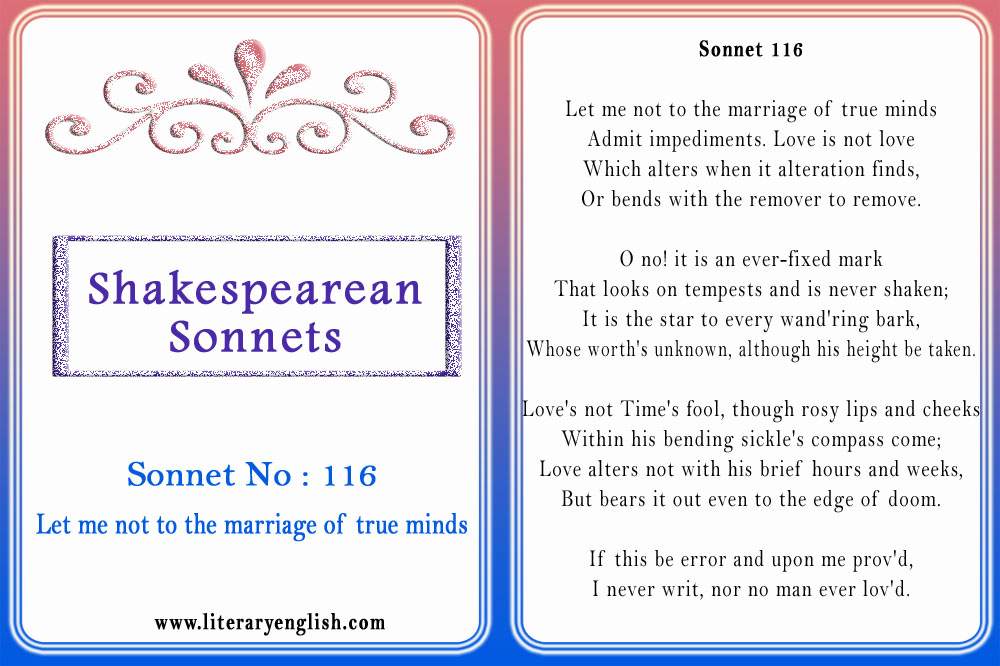 Sonnet 116 | Let me not to the marriage of true minds

Let me not to the marriage of true minds

Admit impediments. Love is not love

Which alters when it alteration finds,

Or bends with the remover to remove.

O no! it is an ever-fixed mark

That looks on tempests and is never shaken;

It is the star to every wand’ring bark,

Whose worth’s unknown, although his height be taken.

Love’s not Time’s fool, though rosy lips and cheeks

Within his bending sickle’s compass come;

Love alters not with his brief hours and weeks,

But bears it out even to the edge of doom.

If this be error and upon me prov’d,

I never writ, nor no man ever lov’d.

May I never stand in the way of two people who are truly in love.

Love is not true love

Which changes whenever an issue comes up

Or ends when the beloved disappears.

No, it is a permanent thing

That goes through wild storms and is never shaken.

It is the constant North Star used as a guide by all lost ships,

Whose value is immeasurable, although is often taken for granted.

Love is not dependent on time, though your youthful rosy lips and cheeks

Are inevitably affected by the cruel effect of time,

Love alters not with over the course of a few brief hours and weeks,

But bears it out even to the end of the world!

If this is wrong and you can prove otherwise,

I have never written anything of value, and no one ever truly loved.

Shakespeare wrote 154 sonnets in total, which were published in the year 1609. These sonnets have proven to beat the tides of time. Even after centuries, they are still read, adored and admired for the beautiful poetic techniques that the poet has used to elevate the scope and richness of these poems. Shakespeare’s sonnets are based upon the theme of love and obsession, which never gets old. Most of the sonnets follow the same structure and the rhyme scheme, which is another reason that makes them stand out.

Sonnet 116 begins with a prayer that the poet prays for. It is that that no one, not even he himself, may ever be an obstacle in the path of love. Shakespeare wrote this sonnet to emphasize the point that love never changes, despite the circumstances. Neither does it get old like everything else does. It remains immortal, it remains unchanged if its true.

May I never be a hurdle in the path of love. May I never come between two true lovers. Love is not true if it has the capacity to change with time. It is not true love if it disappears with hardships or the disappearance of the beloved. It remains there through thick and thin. It constantly shines like a northern star, paving the way for the lost. It is valuable and very worthwhile, but people might take it for granted most of the time. Love surpasses the test of time, unlike your beautiful face, which has faded with the course of it. Love is not a matter of days and weeks, but it will remain till the end of time. If you do not believe me, or if anything that I said is wrong, you are allowed to consider that whatever I wrote all my life is worthless. You are allowed to believe that no one on earth has ever fallen in love.

Structure of the Sonnet

The structure of this specific sonnet is the same as the rest of the Shakespearean sonnets. It comprises of 14 lines which are divided into four stanzas. The first three stanzas consist of four lines each, making them quatrains, while the last stanza only has two lines, hence a couplet. The last stanza concludes the poem in a very subtle manner.

The Rhyme scheme is also very consistent, like the rest of Shakespeare’s sonnets, that is, abab cdcd efef gg.

Shakespeare has made beautiful use of the poetic devices in this sonnet. We can see the use of alliteration, metaphor, personification and hyperbole.

Alliteration is the repetition of the first sounds of words closely placed together within a line. In the following line, for example,

Let me not to the marriage of true minds

The sound of m is repeated in the words me, marriage and minds.

Which alters when it alteration finds,

Within his bending sickle’s compass come;

The sound of c is repeated in the words compass and come.

Metaphor is the comparison of two things without using like or as. In the following line, for example,

It is the star to every wand’ring bark

The poet has compared love with the northern star, which shines consistently in the sky, guiding the lost ships since the beginning of time and will continue to do so till the end.

Personification is giving human attributes to non-human things. In the following line, for example,

That looks on tempests and is never shaken;

The poet is talking about love because it can bear all the hardships and is able to face every difficulty that it is put through. It is never afraid of storms.

Hyperbole is the exaggeration of ideas. The poets use this poetic technique to put an emphasis on what they think. In the following line, for example,

I have never written anything of value, and no one ever truly loved.

The central idea of sonnet 116 is that true love remains unchanged and unaffected, no matter what happens. It does not fade away with time, nor is it affected by distance. It shall remain alive in the heart for as long as it is beating.