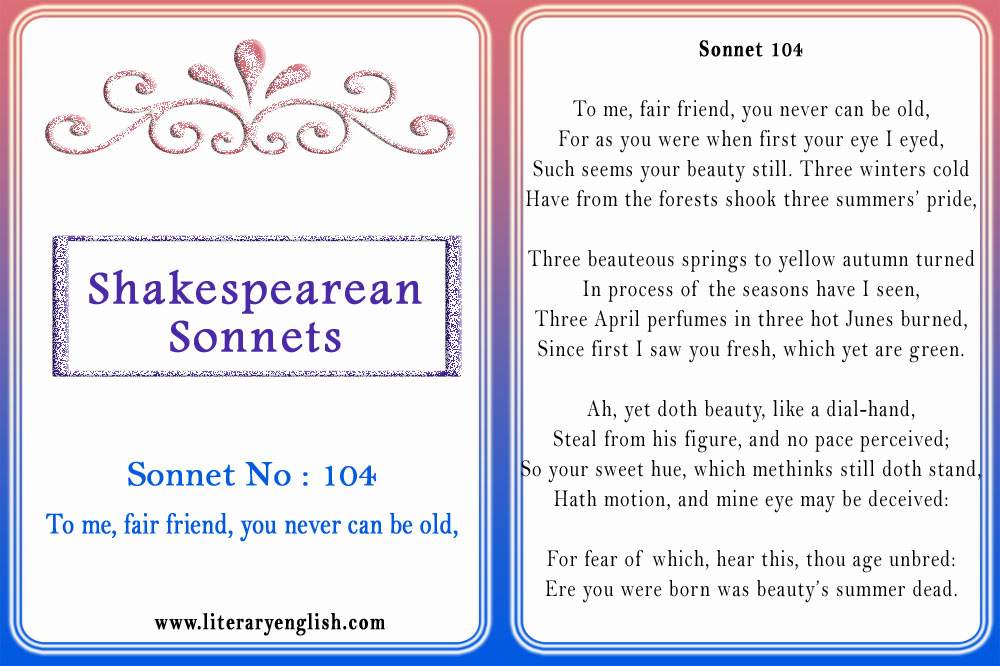 To me, fair friend, you never can be old,

For as you were when first your eye I eyed,

Have from the forests shook three summers’ pride,

In process of the seasons have I seen,

Since first I saw you fresh, which yet are green.

Steal from his figure, and no pace perceived;

So your sweet hue, which methinks still doth stand,

Hath motion, and mine eye may be deceived:

For fear of which, hear this, thou age unbred:

Ere you were born was beauty’s summer dead.

To me, my dear friend, you could never be old, for your beauty seems unchanged from the first time I saw your eyes.

Three cold winters have passed into summer, and three beautiful springs have become autumns. In the course of the four seasons.

The perfumed scents of three Aprils burned up in three hot Junes, Since first I saw you in your youthful prime, and you are still as beautiful and young.

But beauty moves forward continually, imperceptibly, like the hands of a clock. In the same way, your beauty, which seems unchanged to me, moves forward, deceiving my eyes.

Out of my fear that you will lose your looks, hear this, you unborn generations: Before you were born the most beautiful person alive had been in their prime.

Shakespeare’s sonnets are known to be the most beautiful poems in the history of literature. They are still read and admired by readers throughout the world. Shakespeare wrote 154 sonnets in total, which were published altogether in 1609. These sonnets describe the passion and obsession of the poet for his beloved. Sonnets 1 to 126 are said to be written for a man that Shakespeare called Fair youth, while sonnets 127 to 154 are written for a woman that he referred to as the dark lady.  The mood and tone of the sonnets for the Fair man revolves around love, while those written for the dark lady are depressing.

Shakespeare wrote sonnet 104 for the Fair youth that he admired and wrote most of his sonnets for. Shakespeare, in one of his sonnets, called the beauty of his beloved immortal, but he is not doing that here. He praises the beauty of this man. He says that his beloved is no less beautiful than when they first met. But by the end of the poem, the poet admits to the fact that his beauty shall not last forever because none does.

You are never old in my eyes, my dear friend. You are still the same beautiful person that I met years ago. Nothing about you has changed. Time was unable to fade your beauty away. Three winters, three summers, three autumns and three springs have passed. The beauty of autumn has turned into hot summers many times, but your beauty remains unchanged. But then, beauty is mortal. It will vanish as everything else does. I believe I know that the same might be happening to your beauty, but it is my love for you that is not letting me accept and see that. You are still the same person to me as you were three years ago. I fear you will lose what you have someday, but let me tell the youth that is not being born yet that by the time the y live, the most beautiful person, that is you, will already be dead.

The structure of sonnet 34 is no different than other sonnets of Shakespeare. The poem comprises fourteen lines and is divided into four stanzas. The first three stanzas consist of four lines each, making them quatrains, while the last stanza is a couplet concluding the poem.

Shakespeare has enhanced the beauty of this already beautiful poem by using a few poetic techniques. The poet has made good use of poetic devices such as alliteration and simile in this particular sonnet.

Alliteration is the repetition of the first sounds of closely placed words within a line. Shakespeare has used this particular technique many times in his poems. In the following line, for example,

To me, fair friend, you never can be old,

The sound of f is repeated in the words fair and friend.

The sound of s is repeated in the words such and seems.

Another example of alliteration can be seen in the following line of the poem,

Steal from his figure, and no pace perceived;

Simile is comparison of two things by using like or as. In the following line, for example,

The poet has compared the beauty of his beloved to the dial of a clock. His beauty will fade away with the passage of time.

The main theme of the sonnet is how beauty fades away as time passes. Even though the love that a lover beholds does not let him accept that, the beloved is always beautiful to him, but it still doesn’t change the fact.