Sonnet 34 by William Shakespeare
Why didst thou promise such a beauteous day? 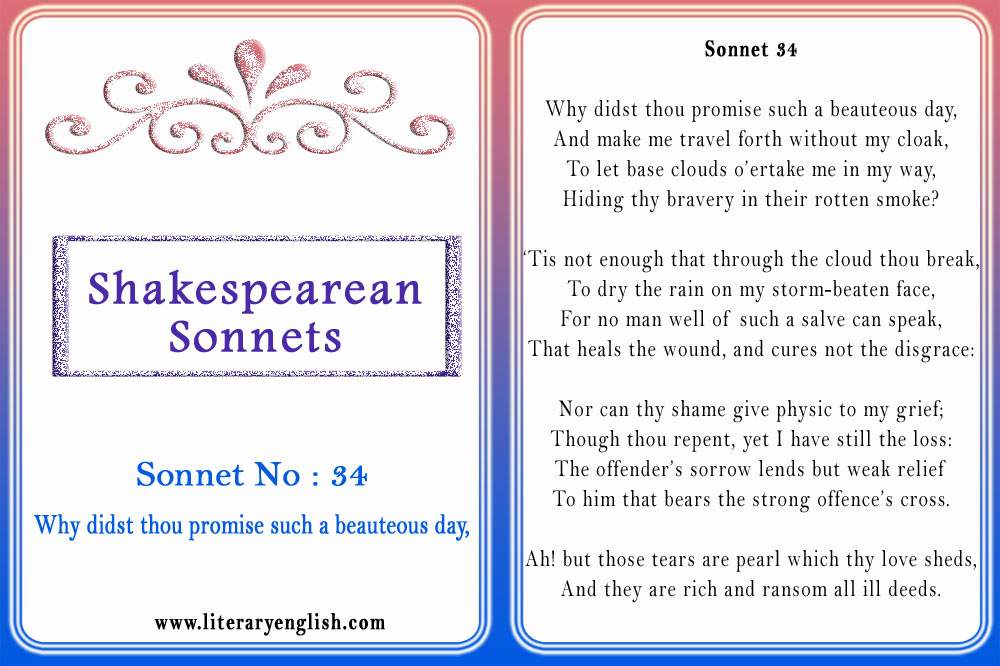 Sonnet 34 | Why didst thou promise such a beauteous day?

Why didst thou promise such a beauteous day,

And make me travel forth without my cloak,

To let base clouds o’ertake me in my way,

Hiding thy bravery in their rotten smoke?

‘Tis not enough that through the cloud thou break,

To dry the rain on my storm-beaten face,

For no man well of such a salve can speak,

That heals the wound, and cures not the disgrace:

Nor can thy shame give physic to my grief;

Though thou repent, yet I have still the loss:

To him that bears the strong offence’s cross.

Ah! but those tears are pearl which thy love sheds,

And they are rich and ransom all ill deeds.

Why did you, promise such a beautiful day

and make me go out without my cloak

then hide your brilliance behind the poisonous vapours of those nasty clouds,

only to let them overtake me as I went?

It’s not good enough to break through the clouds

and dry the rain off my storm-beaten face

because no-one can be satisfied with a balm that heals the wound but doesn’t cure the hurt.

Nor can the shame you exhibit help:

An offender’s regret doesn’t give much relief

To the one who has been badly offended.

Ah, but those tears you’re shedding out of love are like pearls:

they are very valuable and make up for all your bad deeds.

Shakespearean sonnets have become a standard of sonnet writing since the seventeenth century. No one could excel the literary genius in hundreds of years. Shakespeare wrote the sonnets for his beloved, whom he referred to as the fair youth. The love for his beloved was an inspiration for him to write 154 sonnets, which are based on love, intimacy and deception. All 154 sonnets were published together in 1606.

William Shakespeare wrote sonnet 34 for his beloved, to show how disappointed and upset he was. Throughout the poem, the poet expresses his anger and grief towards his beloved, but in the last two lines he gives up to the hands of love, forgiving all the bad deeds that his beloved had done because he could not see him/her cry.

Summary of Sonnet 34 | Why didst thou promise such a beauteous day?

Why did you promise me a beautiful day like the sun does? Why did you make me believe in you so much that I did not feel the need to protect myself? I did not even give it a second thought because it was you who had promised. But you chose to deceive me and that deception has affected me to my core. You are now trying to repent, you are now trying to make up for what you did, but it is of no use now. You can heal the wound that you see but you cannot ease the pain that it has caused me. Nor does your embarrassment be of any help now, because it cannot undo the offence that you have caused me. I cannot be relieved now. Oh, but the tears that you are shedding are very valuable to me. I cannot see you cry and let you waste those. They have made up for all that I lost and for all the bad that you have done to me.

Sonnet 34 follows the same structure as Shakespeare’s other sonnets do. The poem comprises fourteen lines and is divided into four stanzas. The first three stanzas consist of four lines each, making them quatrains, while the last stanza is a couplet concluding the poem.

Shakespeare has beautifully incorporated a variety of poetic devices into his sonnets. The poet has made good use of poetic techniques such as alliteration and metaphor in this particular sonnet.

Alliteration is the repetition of the first sounds of closely placed words within a line. Shakespeare has used this particular technique many times in his poems. In the following line, for example,

And make me travel forth without my cloak,

The sound of m is repeated in the words make, me and my.

For no man well of such a salve can speak,

The sound of s is repeated in the words such, slave and speak.

And in the last line of the sonnet,

And they are rich and ransom all ill deeds.

The sound of r is repeated in the words rich and ransom.

Metaphor is the comparison of two things without using like or as. In the following line,

Ah! but those tears are pearl which thy love sheds,

The poet has compared the tears of his beloved with pearls. This shows how valuable the tears of the poet’s beloved are to the poet. They are beautiful and unique, like the pearls found in the depths of the oceans.

The main theme of the sonnet is how one suppresses his anger and sacrifices his feelings in the name of love. How one cannot see his beloved in pain even though he has hurt and deceived him. How every single thing in love is forgiven and forgotten.