Sonnet 53 by William Shakespeare
What is your substance, whereof are you made 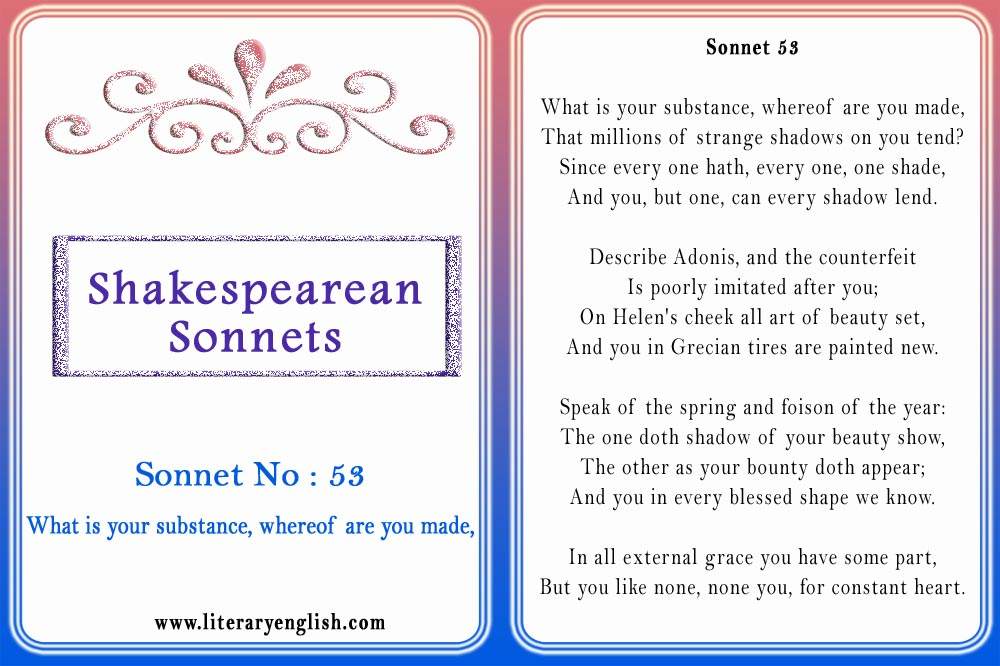 Sonnet 53 | What is your substance, whereof are you made

What is your substance, whereof are you made,

That millions of strange shadows on you tend?

Since every one hath, every one, one shade,

And you, but one, can every shadow lend.

Describe Adonis, and the counterfeit

Is poorly imitated after you;

On Helen’s cheek all art of beauty set,

And you in Grecian tires are painted new.

Speak of the spring and foison of the year:

The one doth shadow of your beauty show,

The other as your bounty doth appear;

And you in every blessed shape we know.

In all external grace you have some part,

But you like none, none you, for constant heart.

What is there so special about you, what are you made of,

that you can express millions of unusual forms?

Everyone else has only one form but you,

although just one person, can add something to everyone else’s form.

Try and paint Adonis and the forgery

is a poor imitation of you.

Or capture Helen in all her beauty

and it’s you, newly painted in Grecian clothes.

Mention the spring and the rich harvest season –

the one is just a weak reflection of your beauty

and the other a pale imitation of your richness.

We recognize you in every beautiful object we see.

There’s something of you in every appearance of beauty

but you’re not like any of them – and none of them are like you – in the constancy of your heart.

Sonnet 53 is one of the 154 sonnets which were published together in the year 1609. The sonnets were inspired by a man that Shakespeare adored and Shakespeare’s mistress that Shakespeare shared a very complex love triangle with. The identity of this man that Shakespeare called the fair youth is still a mystery to date. Major themes of the sonnet revolve around love and the things associated with love, like jealousy, intimacy, beauty, mortality and betrayal. These sonnets are considered one of the most beautiful pieces of art in the history of English literature and are still read and adored by people after centuries.

Shakespeare really admired the man he called a fair youth. He was in awe of his beauty, which he expressed many times through his poems. Sonnet 53 is dedicated to the fair youth, as many of his other sonnets are. Shakespeare expresses how beautiful and incomparable his beloved is. The poet talks about how he can see his beloved in every beautiful thing that he sees.

Summary of Sonnet 53 | What is your substance, whereof are you made

What is so special about you? What is it you are made of? How can you express millions of different shapes being a single person? Everyone in the world exists in one shape only, but you, you can add up to the beauty of everyone around you. If an artist tries to paint Adonis, a youth from Greek mythology, who was so beautiful that the goddess Venus fell in love with him, he would paint a poor imitation of the fair youth. And if somebody tried to depict and paint Helen, the great beauty of Sparta, he would paint the fair youth in a grecian gown. The spring season is a poor reflection of your beauty. You can be seen in all the beautiful things of the world. Though you can be seen in every beautiful thing, none of those can be compared to you. You are the most beautiful of them all.

Structure of The Sonnet

Sonnet 53 is comprised of fourteen lines. The lines are divided into four stanzas. The first three stanzas are made of four lines, hence quatrains, and the last stanza is made of two lines, hence a couplet. This structure is followed throughout the Shakespearean sonnets. The rhyme scheme of sonnet 53 and the rest of the sonnets is abab cdcd efef and gg.

Use of Poetic Devices in the Sonnet

Poetic devices enhance the beauty and richness of a text. They help the poet with creating the emphasis that he wants to in a subtle way. Shakespeare used multiple poetic devices in sonnet 53, like alliteration and hyperbole.

Alliteration is the repetition of the first sound of words closely placed together within a line.

In the following line, for example

What is your substance, whereof are you made,

The sound of W is repeated in what and whereof.

And in the line

Speak of the spring and foison of the year:

The sound of S is repeated in the words speak and spring.

Hyperbole is the exaggeration of ideas. Shakespeare has used hyperbole multiple times in the poem when making comparison of the beauty of his beloved.

In the following line, for example,

That millions of strange shadows on you tend?

Shakespeare has exaggerated the  idea that his beloved has millions of different forms and shapes.

The main theme of Sonnet 53 revolves around the beauty of Shakespeare’s beloved. To the poet, the Fair Youth is the most beautiful person that has ever existed. The poem is about how a lover is truly and entirely devoted to his beloved.