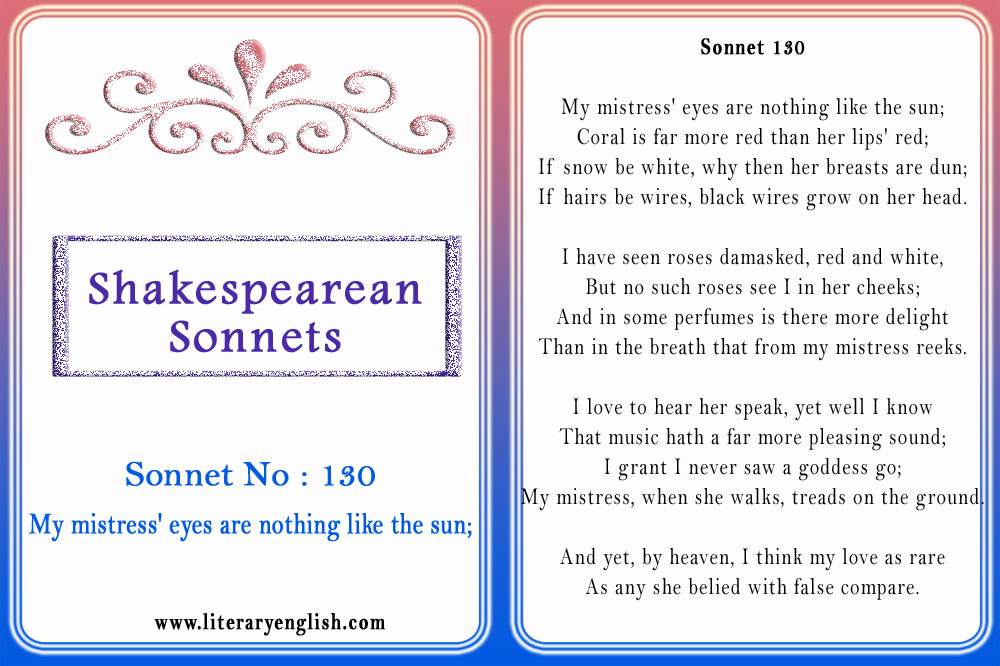 Sonnet 130 | My mistress’ eyes are nothing like the sun

Coral is far more red than her lips’ red;

If snow be white, why then her breasts are dun;

I have seen roses damasked, red and white,

But no such roses see I in her cheeks;

And in some perfumes is there more delight

Than in the breath that from my mistress reeks.

I love to hear her speak, yet well I know

I grant I never saw a goddess go;

My mistress, when she walks, treads on the ground.

And yet, by heaven, I think my love as rare

As any she belied with false compare.

Coral is far more red than her lips are.

If snow is white, then why are her breasts are a brownish grey colour.

If hairs can be compared with wires then black wires grow on her head.

I know what pink, red and white roses look like

But I don’t see any roses in her cheeks.

And there’s more pleasure in some perfumes

Than there is in my mistress’ bad breath!

I love her voice although but I know

That music is more pleasing to the ears.

When my mistress walks, she walks like a normal person.

And yet I think that my beloved is as unique

Shakespearean sonnets are fourteen lined poems written by William Shakespeare. The sonnets are, in total, 154 in number, which were published in 1606. Most of these sonnets are said to be dedicated to a man that Shakespeare was very close to. The man known as W.H inspired Shakespeare to create such beautiful pieces of art, which even after hundreds of years, are still adored and admired. The identity of this man remains a mystery though. Some of the sonnets were also written for Shakespeare’s mistress, that he addressed as the Black Lady.

Introduction to the Sonnet

Shakespeare wrote Sonnet 130 for his mistress. This sonnet has a touch of humour and realism in it.  Shakespeare is making comparison of his beloved with all the good things in the world. Unlike his other poems, where he represented his beloved as the most beautiful person living on earth, here the poet describes his beloved as an ordinary human being with no godly qualities but still very rare and unique, as every other woman who is loved would be.

The eyes of my mistress do not shine as the sun does. Her lips are pale, even the corals are redder than her lips are. If the colour of the snow is white, why are my mistress’s breasts so dull and grey? Her hair is frizzy like wires. It looks like her head is covered with black wires. I have seen roses of all colours – pink, red and white. However, I see no such thing as roses in the cheeks of my mistress. The perfumes smell sweeter and fragrant than the foul breath that comes out of my mistress’s mouth. Even though I love it when she speaks and it is really delightful, I am aware of the fact that music sounds far better than her voice does. I admit that I have never seen a goddess in real life, but my mistress, when she walks, she walks like an ordinary person. Regardless of after all that, I believe my beloved is rare and unique. She is as special as all of those women who are falsely represented by the poets in their exaggerated comparisons.

Structure of the Sonnet

It follows the same rhyme scheme as Shakespeare’s other sonnets do, that is abab cdcd efef gg.

Shakespeare has incorporated several different poetic devices into this sonnet. We can see the use of alliteration, metaphor, imagery and simile.

Simile is comparison of two things by using like or as. Shakespeare has used a simile in the first line of this sonnet where he compares his beloved’s eyes with the sun.

Alliteration is the repetition of the first sounds of words closely placed together within a line. In the following lines, for example,

I have seen roses damasked, red and white,

The sound of r is repeated in the words roses and red.

I love to hear her speak, yet well I know

The sound of h is repeated in the words hear and her.

Metaphor is the comparison of two things without using like or as. In the following line, for example,

The poet has compared the hair of his beloved with black wires that are covering her head.

Imagery is the use of color, descriptions and sensory details to create images in the reader’s mind. Shakespeare used imagery in the following lines. For example,

Coral is far more red than her lips’ red;

If snow be white, why then her breasts are dun;

The central idea of sonnet 130 is admiring your beloved regardless of their appearance. That love does not require perfection. Love is about finding beauty in the imperfections of the beloved.