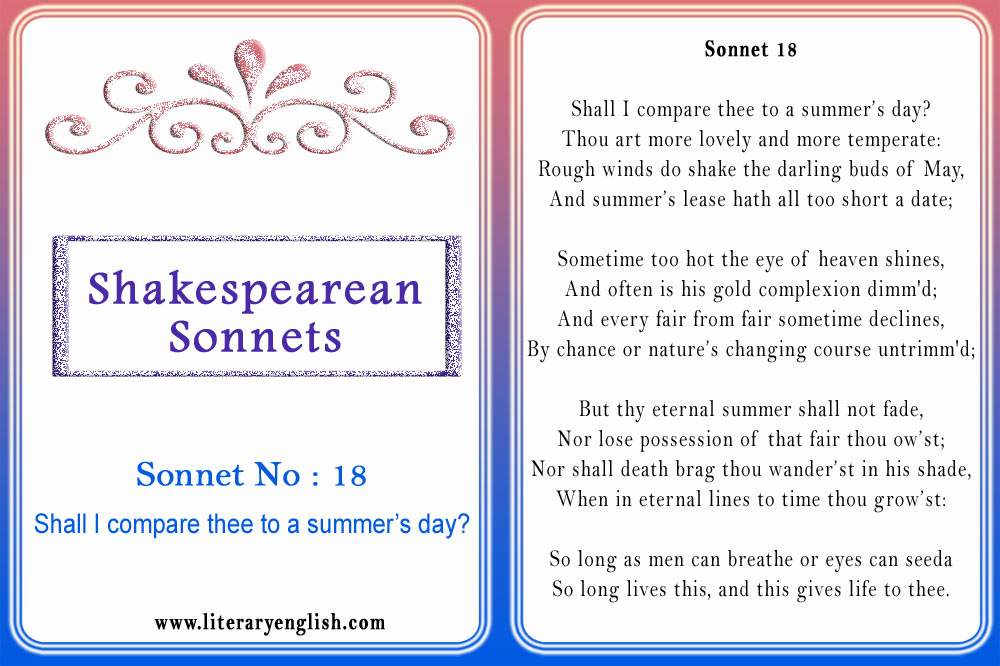 Sonnet 18 | Shall I compare thee to a summer’s day?

Shall I compare thee to a summer’s day?

Rough winds do shake the darling buds of May,

And summer’s lease hath all too short a date;

Sometime too hot the eye of heaven shines,

And often is his gold complexion dimm’d;

And every fair from fair sometime declines,

But thy eternal summer shall not fade,

Nor lose possession of that fair thou ow’st;

Nor shall death brag thou wander’st in his shade,

When in eternal lines to time thou grow’st:

So long as men can breathe or eyes can seeda

So long lives this, and this gives life to thee.

Shall I compare you to a summer’s day?

You are more lovely and more temperate.

There are often rough winds during the month of May,

And summer can be a very short season in general.

Sometimes it can be uncomfortably hot during the summer,

And at other times it might be dreary or cloudy;

And many of the beauties of summer wither and die

But your eternal summer shall not fade

Nor lose possession of its incomparable beauty;

Nor will Death brag that you are just another of his conquests,

When you continue to live in these lines of poetry.

As long as men can breathe or eyes can see,

Shakespearean sonnets are fourteen lined poems written by William Shakespeare. The sonnets are, in total, 154 in number, which were published in 1606. Most of hese sonnets are said to be dedicated to a man that Shakespeare was very close to. The man known as W.H inspired Shakespeare to create such beautiful pieces of art which, even after hundreds of years, are still adored and admired. The identity of this man remains a mystery though. Some of the sonnets were also written for Shakespeare’s mistress, that he addressed as the Black Lady.

Short Summary: Sonnet 18 | Shall I compare thee to a summer’s day?

The poet addresses his beloved, talking about how beautiful his beloved is, just like a fine summer day or maybe more than that. The summer doesn’t last for long, neither does its beauty, but the beauty of his beloved will remain immortal. Summer is quite unpredictable. It might be very hot sometimes, while cloudy and gloomy the other times. The beauty of summer is totally dependent upon nature, while the beauty of the poet’s beloved remains constant and is not bounded by any such obligation.

The poet then proceeds to say that the beauty of his beloved will never fade away, not even death can take that away. His beloved shall remain beautiful in the lines of the poems written by the poet, which will be read by all men and women till eternity.

The sonnet, like other Shakespearean sonnets, follows a specific structure and rhyme scheme. It consists of fourteen lines and is divided into four stanzas.

The first three stanzas are quatrains, while the last stanza is a couplet which concludes the poem. The poem follows the rhyme scheme of abab cdcd efef gg, which is the basic form structure of all Shakespearean sonnets.

Poetic devices add beauty to the texts in a very subtle way. Shakespeare has beautifully incorporated metaphor, personification and imagery into this poem.

Metaphor is the comparison of two unlike things without using like or as.

The entire poem is an extended metaphor, where the poet has compared his beloved to a beautiful summer’s day.

“Shall I compare thee to a summer’s day?”

The line at the very beginning suggests that the poet is addressing his beloved, putting an emphasis on the beauty of his beloved. The entire poem is then a continuation of this comparison, which makes the metaphor an extended metaphor.

Personification is giving human attributes to non-human things. Shakespeare has beautifully incorporated this poetic device into his poems. In the following lines, for example,

Sometimes to hot the eye of heaven shines,

And often is his gold complexion dimm’d;

The poet has assigned heaven, the sky to be exact, the qualities of humans. Since the sky has no eyes or complexion.

Imagery is the use of color, adjectives, descriptions and sensory details to evoke the reader’s imagination. In the following line, for example,

Rough winds do shake the darling buds of May

The poet has used the sense of touch to create an image in the mind of the audience.

The main theme of the sonnet is how beauty never fades away in the eye of the beholder. How love has the power to immortalise the beauty of the beloved and how love encompasses the test of time.