Characters in the Play The Crucible 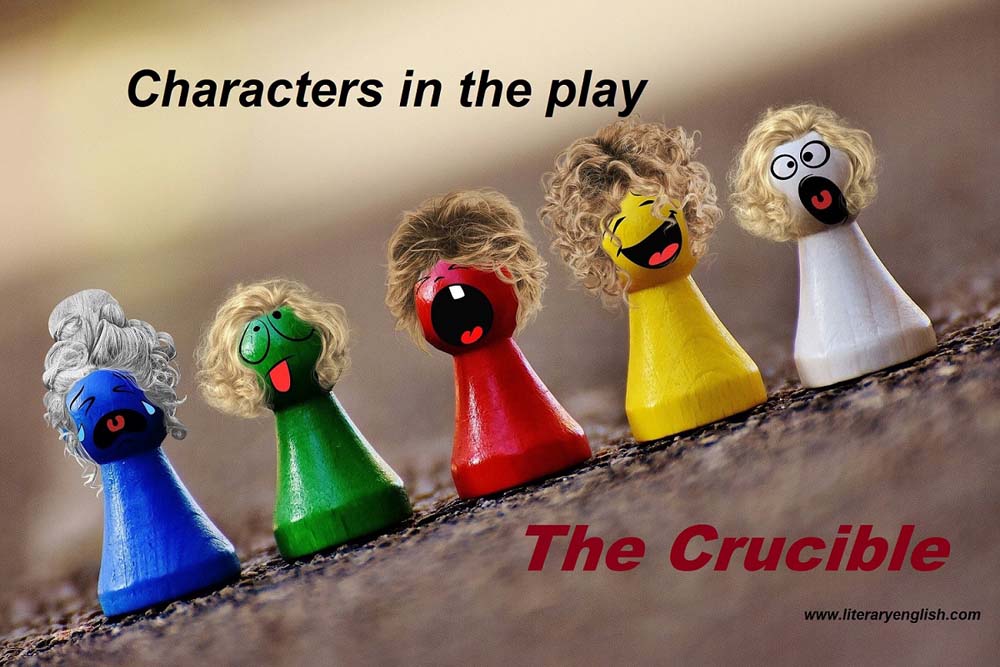 Characters in The Crucible.

Brief Introductions to the Characters in The Crucible

Reverend Parris is a minister in Salem. His daughter Betty is unconscious due to practicing witchcraft with other girls in the woods. He fears that people will force him to leave Salem because of his daughter’s act, so he attempts to strengthen his authority through the witch trial proceedings.

She is Parris’ daughter. Her father, Parris, discovers her with other girls dancing in the woods at midnight. She admits witchcraft and accuses individuals of practicing witchcraft.

Abigail is Parris’ niece. She is the main character in the play The Crucible. She prompts the witch trials in Salem by falsely accusing individuals of witchcraft. She was former servant at Proctor’s house and had adultery affairs with John Proctor. She pretends to see spirits and instructs the other girls to pretend as well to achieve her motives. She accuses Elizabeth and Proctor of practicing witchcraft. She runs away from Parris’ house by robbing him in last act of the play.

John Proctor is a farmer in the Salem and former lover of Abigail’s. Proctor plainly denounces Parris and does not attend church. Abigail accuses him and his wife Elizabeth but Proctor and his wife ironically fail to justify that Abigail is fraud. John Proctor wants to keep his name and does not confess and prefers death over confessing. He is the real hero of the play.

She is Parris’ black slave. Parris discovers her casting spells and dancing with the girls in the woods. She enticed Betty to drink blood. Putnam informs Hale that she can conjure spirits. She confesses her contact with the devil and accuses others.

She is wife of Thomas Putnam. She believes in witches responsible for the deaths of her seven infant children.

He is a greedy landowner in Salem. Putnam prompts his daughter to falsely accuse others neighbors of witchcraft. Because he wants them to hang, so he might be able to purchase their land once it becomes available after losing all property rights. Putnam is the only man who has enough money to purchase others land in Salem.

She is the sick daughter of Putnams’. She accuses others of practicing witchcraft. A witness claims, who overheard, Putnam prompting Ruth to accuse others, so he can buy their land and Ruth does so.

She is a servant to the Proctors. She is official at the court. She also falsely accused others of witchcraft; however, she later admits that she was lying. She also tells the court that other girls are also accusing falsely.

She is servant to the Putnam family and a friend of Abigail. She participates in the witch trials and pretends that she can see spirits. She also falsely accuses individuals of witchcraft.

A special judge serving in the Salem court during the witch trials, who signs the death punishment for those individuals who denies to confess witchcraft. He rejects Hale’s proposal to delay any execution. He was not in favor to postpone the punishments in order to give time to prisoners to confess.

He is a minister in Beverly. The people of Salem summon him to investigate witchcraft prevailing in Salem. He also examines Betty’s condition and determines if witchcraft is responsible. He supports the witch trials, but later denounces them when he learns that there is false accusing of witchcraft. He also tries to convince prisoners to confess witchcraft.

He is an elderly resident of Salem. He challenges the court to defend his wife who has been convicted of witchcraft. He also informs the court of false accusing by Putnam’s daughter prompt by her father in order to buy land of hanged. He was arrested for dishonoring the court.

She is wife of Francis Nurse. She respected individuals in Salem because of her kindness and charity. She argues against the witch trial investigations. Mrs. Putnam accuses her of witchcraft. Proctors bring a statement signed by 92 people for her honesty but the court rejects the statement.

He is a farmer and landowner in Salem. He is a respected member of the society.

She is a beggar in Salem. She is the first woman accused of witchcraft by girls.

He is a judge in the Salem court.

She is a friend of Abigail. She also falsely accuses others of witchcraft.

He was appointed by the Salem court to arrest the accused persons.

He was appointed by the Salem court to help in arresting accused persons.