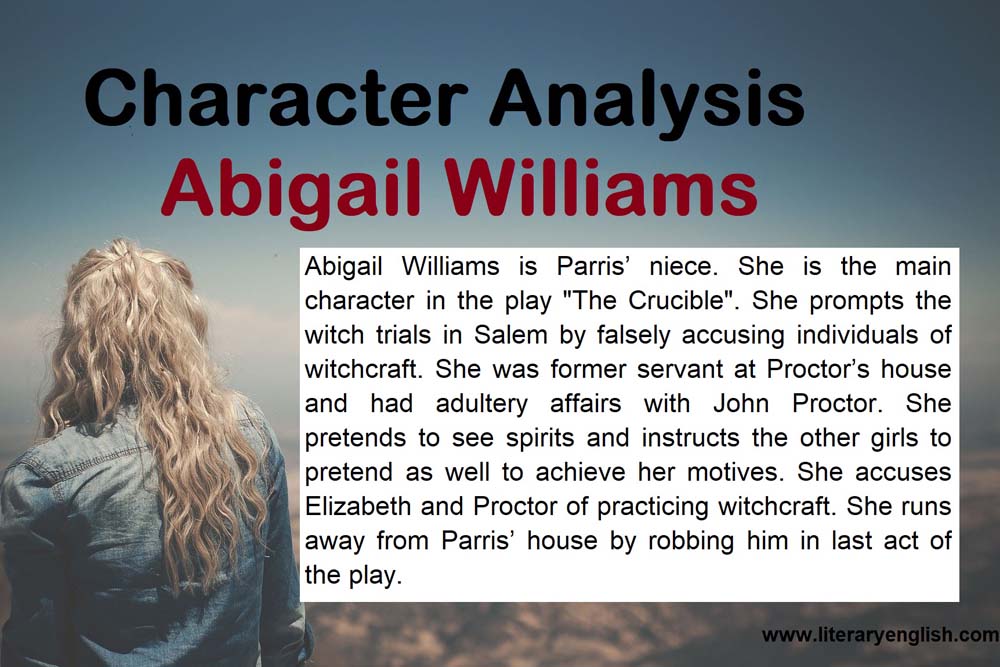 Abigail Williams is the main character and driving force of the play. She played a vital role in taking responsibility for the other girls dancing in the woods. She also dictates other girls and manipulates them according to her own wishes.

She was casting a spell in the woods with Tituba and other girls in order to get rid of Elizabeth proctor from her way. She lies confidently conceal her affair and also threatens other girls to not reveal her lies. She has the power to drive the court and other girls as she wants. She manipulates every situation to fulfill her own ends.

She manages to escape severe punishment for casting spells and adultery from might court. Court could not judge her false pretending of attempted murder when she plots Elizabeth’s death. She also pretends as Merry Warren is attacking on her and other girls also act as Abigail does. Abigail is successful in shifting the focus of court away from her by accusing individuals of witchcraft. This desperate act of self-preservation soon becomes Abigail’s avenue of power.

The character of Abigail Williams contrasts with Elizabeth Proctor. Abigail represents the repressed material and sexual desires that all of the Puritans possess. Abigail does not suppress her desires and finds herself attracted to John Proctor while working as servant at Proctor’s house. According to the Puritan Doctrine, her lover affair with Proctor is considered a sin. A person who commits a sin, either he has to go for punishment or he should confess and repent but Abigail does the opposite. She pursues Proctor and eventually seduces him.

Abigail Williams does not believe in Puritan social restrictions and feels herself free from Puritan restraints. She acts as she wants to do. Her love affair, casting a spell, accusing falsely, pretending in order to kill Elizabeth and speaking lies confidently; her all acts are opposite to Puritan doctrine but she does all these evils which leads towards her fall. Abigail believes that nothing is impossible for her and no one can escape from her grasp.

Abigail’s amorous pursuits mirrors her teenage. She is like other teenage girls who dream for their ideal life partner. However, she owns sharp insight that reflects her maturity beyond that of most other characters. Abigail soon becomes much confident and uses her authority to construct an environment of fear and terrorization. She has hold on other girls and uses them according to her own plans, and she does not hesitate to accuse any individual of witchcraft

Abigail believes that she possesses Proctor’s true love and his ideal choice for a wife. She supposes that by removing Elizabeth from her way will pave the way for Proctor who will marry her and fulfill her fantasy. Abigail goes to full extent to achieve Proctor as her husband but she fails to do so. Her sexual desires convince herself that Proctor loves her too but he cannot express his love because of his wife. She was not aware that why Procter is in relation with him. There was not true love but she was taking advantage of his loneliness and insecurity during his wife’s illness rather than true love of Proctor.

She makes a plan to win Proctor. She makes a strategy to establish her credibility with the court and then she attempts to eliminate Elizabeth from his way. Abigail cautiously marks the vulnerable individuals whom she accuses in order to increase her credibility. Her decision to wait until she wins trust at court before she accuses Elizabeth reveals her determination. Lives of innocent accused pe ople do not matter for Abigail who is focusing at her own end. She is successful at making credibility with the court but cannot win Proctor which spoils her plan. In last act of the play, Abigail realizes that her plan has spoiled badly and she has failed to achieve Proctor although she condemns Proctor’s execution. Having nothing in her hand, she escapes from Salem.