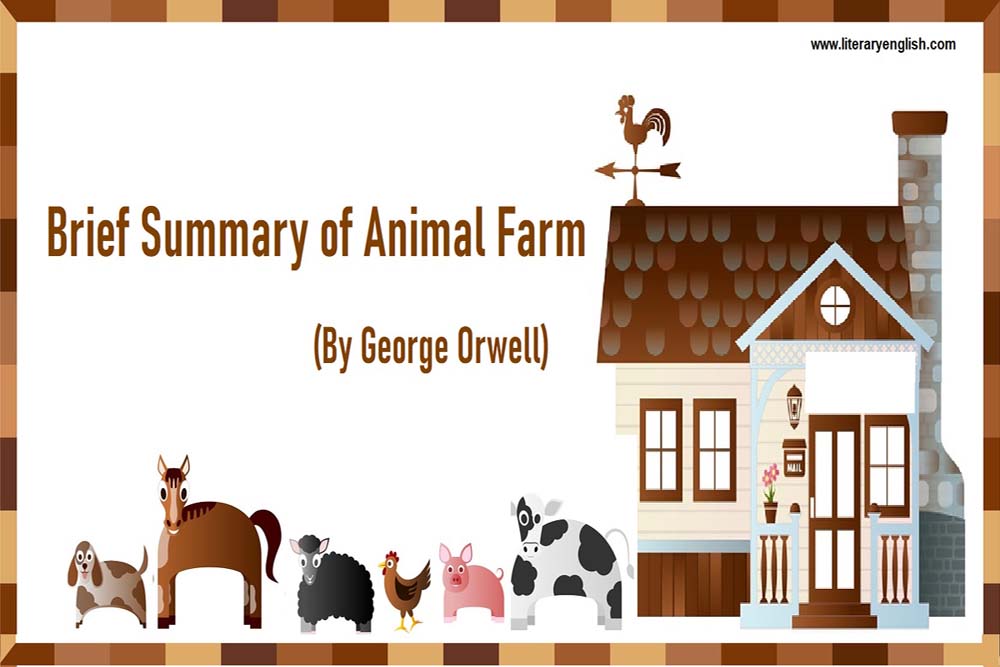 One night, all the Mr. Jones’s Manor Farm animals bunch up in a barn to listen to a pig, Old Major. He had a dream in which he saw a world where all animals will live free from the oppression of their human masters. He tells the animals that they must work together to achieve revolutionary freedom and teaches them to sing a song of freedom called “Beasts of England,” in which he describes his revolutionary vision. Three days after the meeting, Old Major dies, but the animals are motivated by his philosophy of animalism and plan a scheme against Jones under the supervision of three pigs: Napoleon, Snowball, and Squealer. These three pigs become actual figures of revolutionary plans by suggesting ideas and manipulating other animal of the farm to fulfill their dream. One day Jones forgets to deliver the food, and the animals decide to bring revolution. They chase Jones and his men off the farm and occupy the whole farm. The name of Manor Farm changes to Animal Farm.

At first, revolution is a success and Animal Farm prospers. The animals decide to meet at every weekend to discuss the progress of the farm. Pigs are the most talented animals there, and because of that, they become the supervisors of the farm. Napoleon is one of the pigs who rule the farm, but he is most cunning and clever. His hunger for power increases daily; he steals milk and giant apples to feed himself with other pigs. Squealer, a pig who can persuade other animals that pigs are always moral and correct in their actions, is also enlisted.

Jones and his troops return to Animal Farm, later that fall in an attempt to reclaim it. Snowball’s methods help the animals to beat Jones in the Battle of the Cowshed, later dubbed “The Battle of the Cowshed.” As winter approaches, a conceited horse that only cares about colorful ribbons and sugar, Mollie gets led off the farm by another human. Snowball begins designing a windmill that will supply energy and offer the animals more free time. Still, Napoleon adamantly opposes the concept, claiming that erecting the windmill will cost too much money.

Napoleon calls a troop of fierce dogs to chase Snowball from the property permanently on Sunday, that the pigs invite the windmill to the animal farm for a vote. Napoleon declares that no more arguments will be held; he also informs them that the windmill will be erected. After all, claiming that it was his idea that Snowball stole. Napoleon uses Snowball as a scapegoat for the rest of the tale, blaming all of the animals’ woes on him.

The following year will be spent constructing the windmill. Boxer, a tremendously powerful horse, prove to be the most valuable animal in this venture. Jones, on the other hand, abandons the farm and relocates to another part of the county. Napoleon employs a lawyer and starts trading with neighboring farms, which is contrary to Animalism’s beliefs. When a storm toppled the half-finished windmill, Napoleon, predictably, blames Snowball and orders the animals to restore it.

Napoleon’s desire for power grows to the point that he becomes a totalitarian dictator, forcing innocent animals to make “confessions” and then killing them in front of the entire farm. He and the pigs move in with Jones and begin sleeping in his beds (which Squealer excuses with his brand of twisted logic). The animals are being fed less and less, while the pigs are becoming more prominent and more visible. After the windmill is completed in August, Napoleon sells a pile of timber to Frederick, a local farmer, who pays for it with fake money.

Boxer offers his might once more to assist with constructing a new windmill, but when he collapses from exhaustion, Napoleon sells the loyal horse to a knacker (a glue-boiler). According to Squealer, Boxer was transported to a veterinarian and died a peaceful death in a hospital, and the animals believe him.

After Napoleon obtains two fields from another local farmer, Pilkington, Animal Farm expands its borders. But, except for the pigs, all of the animals’ lives are difficult.

Pigs eventually learn to walk on their hind legs and take on many of the characteristics of their human captors. “All Animals Are Equal / But Some Are More Equal than Others,” the Seven Commandments are reduced to a single law. Pilkington drinks with the pigs in Jones’ house at the end of the novel. Napoleon renames the farm Manor Farm and has a disagreement with Pilkington over a card game in which they both try to play the ace of spades. Other animals outside the window are unable to distinguish between the pigs and the humans.

Iram Tariq is a passionate writer and has been writing since 2018 on various niches. She wrote the article ‘Plot Overview of Animal Farm’ by George Orwell in form of a short summary. Her main interest for writing is literature, moreover she also writes business articles. She also provides literary analysis on various literary pieces for helping students.