"Beasts of England" and Other Anthems of Animal Farm 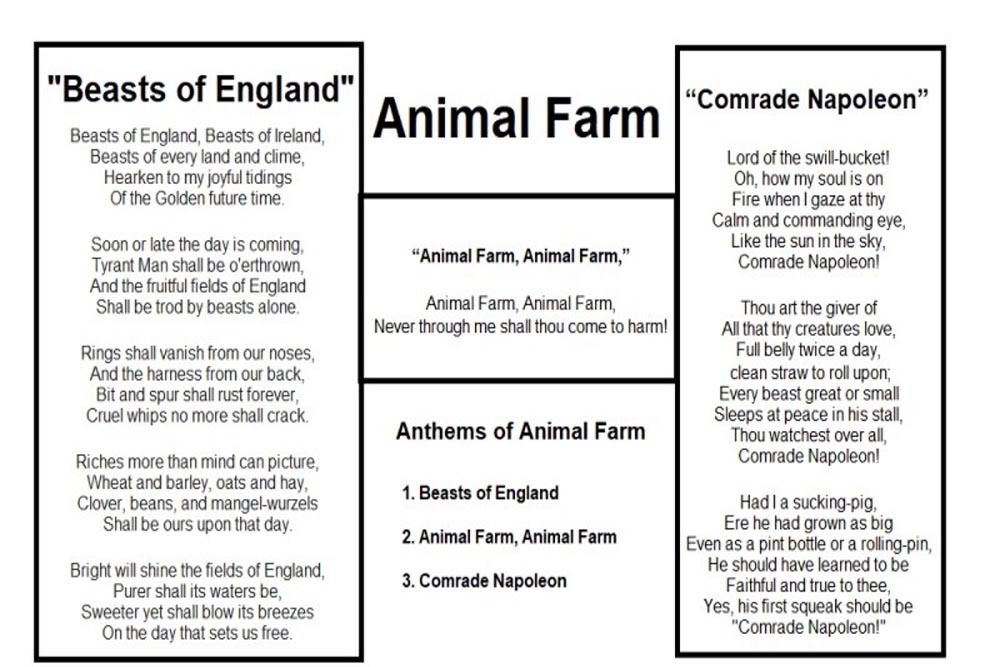 The Old major’s song that was learned by the animals was the first anthem of the farm and it was very popular among animals. This anthem was purely for the freedom of the animals and their lives in the future that will be free from the tyranny of the man.

When rebellion becomes successful and animals took over charge of Animal Farm, pigs becomes powerful and majorly Napoleon feels thrust of power and his fellows help him to manipulate other animals. Napoleon bans for singing the song that entice for rebellion against dictatorship. So with the help of Minmus, he provides another short anthem that is comprised of only two lines.

When Napoleon holds full power, He advises Minimus to make another anthem that is purely written in such a way that glorify only Napoleon as a leader of the animals.

Beasts of England, Beasts of Ireland,
Beasts of every land and clime,
Hearken to my joyful tidings
Of the Golden future time.

Soon or late the day is coming,
Tyrant Man shall be o’erthrown,
And the fruitful fields of England
Shall be trod by beasts alone.

Rings shall vanish from our noses,
And the harness from our back,
Bit and spur shall rust forever,
Cruel whips no more shall crack.

Riches more than mind can picture,
Wheat and barley, oats and hay,
Clover, beans, and mangel-wurzels
Shall be ours upon that day.

Bright will shine the fields of England,
Purer shall its waters be,
Sweeter yet shall blow its breezes
On the day that sets us free.

For that day we all must labour,
Though we die before it break;
Cows and horses, geese and turkeys,
All must toil for freedom’s sake.

Beasts of England, Beasts of Ireland,
Beasts of every land and clime,
Hearken well, and spread my tidings
Of the Golden future time.

Significance of the Song of “Beasts of England”

“Beasts of England” is the song that Old Major teaches to the other animals as a philosophy of Animalism. The song played a vital role in firing up the other animals in their pursuit of rebellion and freedom from humans. Like other speeches of Old Major, his song is anti-human and arouses the sentiments of all the animals. The song is persuasively effective in arousing rebellion because it is easy to remember for the animals and sing collectively.

After the revolutionary freedom, animals practice it as their anthem and all the animals sing it for a long time. Finally, Napoleon bans the song for the certain reasons. Because it promotes rebellion against dictatorship and now Napoleon himself is the real dictator of the time.

The song “Beast of England” is a symbol of unity for the animals. The song helps the animals to keep the spirit of the rebellion alive in their minds and hearts. The song of freedom expecting animal’s desire to goodbye the dictatorship of Man and a new start of democracy.

When Napoleons thrust for the power increases, he bans for singing “Beast of England”, arguing that such an anthem is antiquated and no longer needed after the rebellion has been completed. The anthem is first replaced by the short “Animal Farm, Animal Farm!” composed by the poet Minimus.

Never through me shall thou come to harm!

When Napoleon holds the full power of the farm, his courteous poet Minimus provides another song as an anthem for the farm. The short anthem is again replaced by “Comrade Napoleon”, while “Beasts of England” is eventually outlawed.

Friend of the fatherless!
Fountain of happiness!
Lord of the swill-bucket!
Oh, how my soul is on
Fire when I gaze at thy
Calm and commanding eye,
Like the sun in the sky,
Comrade Napoleon!

Thou art the giver of
All that thy creatures love,
Full belly twice a day,

Clean straw to roll upon;
Every beast great or small
Sleeps at peace in his stall,
Thou watchest over all,
Comrade Napoleon!

Had I a sucking-pig,
Ere he had grown as big
Even as a pint bottle or a rolling-pin,
He should have learned to be
Faithful and true to thee,
Yes, his first squeak should be
“Comrade Napoleon!”