Introduction to Animal Characters in the Novel Animal Farm 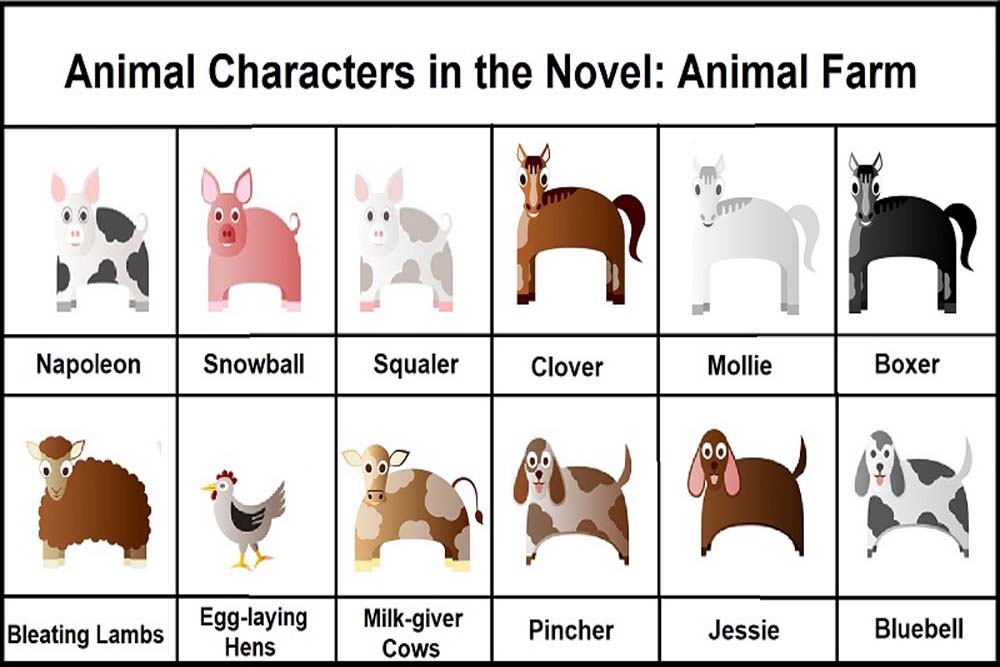 Old Major is a 12 year old boar who delivers a speech about the tyranny practiced on animal by humans and motivates the animals to unite and struggle for the freedom from humans.  His philosophy concerning the tyranny of humans is named Animalism by his followers. He also teaches them a song “Beasts of England” to the animals and asks them to keep singing it. Old Major dies soon after delivering his speech.

Snowball is a motivated and intelligent boar who takes the charge of revolutionary struggle to get freedom. He also draws complicated plans for the construction of a windmill. Snowball was hated by his fellow boar, Napoleon, and eventually chased off of the farm forever by Napoleon’s dogs. Snowball was the true leader of animals but unluckily he was exiled and thereafter used as a scapegoat for the animals’ troubles.

Napoleon is a boar who leads the rebellion against Jones. He is cunning and clever and opposes Snowball for construction of windmill. After the rebellion’s success, he systematically begins hold a strong control over all animals and prepare a force of furious hounds to practice hi tyranny. He starts trading with other farms making violations of the animal rules. He makes amendments in Seven Commandments of Animal Farm and finally reduces to single sentence.

Squealer is the most cunning and clever animal of the farm who has the ability to manipulate and convince all animals. He becomes Napoleon’s mouthpiece and advocates his policies accordingly. Throughout the story, he convinces all the animals through the use of hollow yet convincing rhetoric when Napoleon or any pig breaks any rules of the Animal Farm.

Boxer is a true representative of working class, dedicated, hardworking and disciplined animal of the farm.  On the other hand, he is dimwitted horse who works more than his capacity for building windmill but is sold to a glue-boiler after collapsing from exhaustion.

A vain horse who cares for herself all the times and prefers ribbons and sugar over struggle for freedom. She is eventually lured off the farm with promises of a comfortable life. She was noticed and found an another farm where  she was wearing her favorite ribbons..

Clover is a motherly horse and companion of Boxer who silently questions Napoleon’s decisions that are against the Animal Farm Policy. She becomes aware of the fact when Boxer was in a van of a slaughter house and tries to help Boxer but sick and exhausted Boxer was unable to escape from van.

Benjamin, a donkey, is a cynical and pessimistic animal who has no sense of freedom and revolution and continually undercuts the animals’ enthusiasm with his cryptic remark, “Donkeys live a long time.”

A tame raven who tells the stories about a paradise called Sugar-candy on the other side of mountains. He talks all the time for the life across the mountains and don’t care for the life in Animal Farm.

Cows provide buckets of milk in the farm. After revolution milk was only for calves and not for sale to human or for other animals like pigs and dogs but, pigs theft their buckets of milk and use as their food, violating rules of Animal Farms.

Hens provide eggs at the farm and Jones sale them but after revolution eggs were not allowed to sale to increase the number of hens. Napoleon sales the eggs of hens and hens protests to stop sale of eggs. Napoleon orders his guard dogs to kill all those hens who lay eggs and break them.

There are bleating sheep at the farm and they were trained and manipulated by Napoleon to bleat loudly “Four legs good, two legs better”.

The nine puppies born between Jessie and Bluebell are taken by Napoleon into an isolated place where they were raised and turned to be furious hounds. Later on these dogs were used by Napoleon to exile Snowball and to control other animals.