The Role of Fate in Oedipus The King

In this article, we will learn about the role of fate in Oedipus the King. We will also discuss definition of fate and general beliefs under the term fate and how Greeks were adhere to fate and their beliefs on fate. 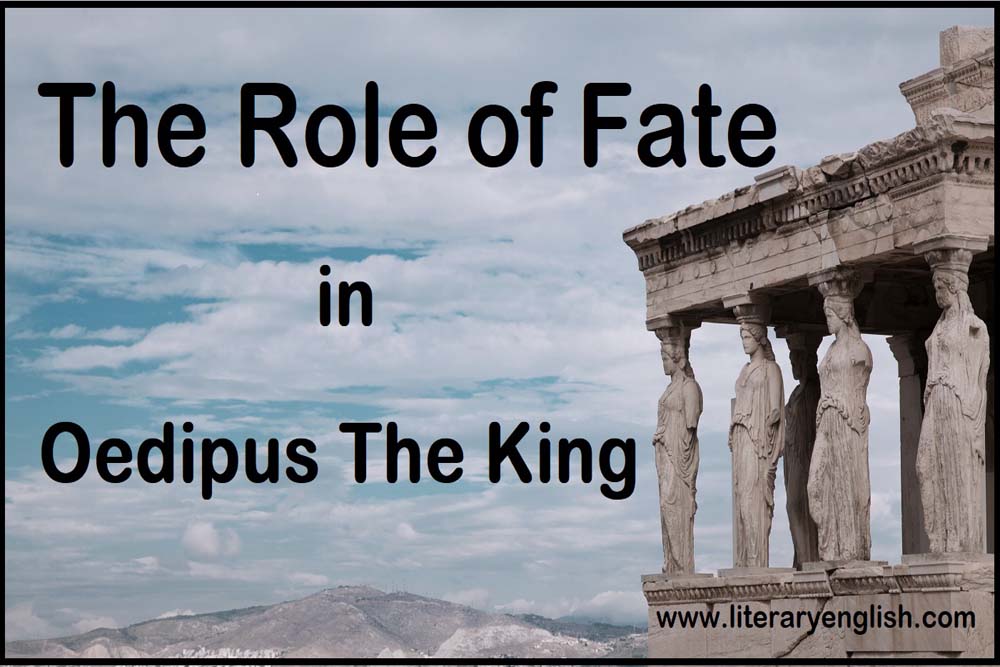 There is no rigid line to blame fate or character responsible for an action or doom of a human being. The people, over centuries, have put forward their opinions but all assumptions are vague.

In Ancient Era, there was a rigid believe that fate is the only divine force which drives men to do course of action in their life. According to their beliefs, fate influences and shapes human life. In Modern Ere, the concept of fate changed in minds of people and they believe on individuals’ action responsible for making fate.

Fate is the will of the God/gods (supreme religious authority according to religion of individuals) which influence and shapes destiny of a human life. According to Greeks, fate of a human is shaped by divine forces that are uncontrollable. If a man performs an action, it is not done by him but fate forced him to do that. But modern people do not believe on fate solely. They believe that individuals are equally responsible for what they do.

Role of fate in Greek Tragedies

Greek tragedies were based on theocentric vision and mostly they carried religious themes where destiny was controlled by divine powers and it was impossible for a protagonist to escape from fate. In Greek tragedies, fall of character is due to destiny that plays role in the play. Ancient Greek tragedies were written by Sophocles, Euripides, and Aeschylus and they were modeled upon religious groundings.

Role of Fate in Oedipus the King

Oedipus the King is a tragedy based on fate like all other Greek tragedies where divine powers are unassailable and they control the destiny of a character. Indeed, this voice of the gods delivered by oracles —the expression of their divine force—represents a dominant, invisible force throughout the Oedipus Trilogy. Yet this powerful control of fate brings a question from the drama itself. If every action is determined ahead of time, and no human effort to escape can change the course of life. Critics have different opinions regarding the preplanned trap where a man was put who has no power to go against preplanned trap by fate.

The main plot of the Oedipus trilogy was based on fate. The chorus gives it more strength in his odes and songs begging from their gods and glorifying their divine powers that determines destiny of Oedipus. Role of fate is vivid in the play because of number of prophesies and beliefs of people regarding oracles in the play.

Initially, King Laius tries to avoid fate when he abandoned his child but fate played his role and his attempt failed and Oedipus was given with another life and brought up by King Polybus. Secondly when Oedipus become to know that he will kill his father and marry his mother he escaped to avoid fate but again here fate played his role and brought him at that point where fate want to make his use. Thirdly When Sphinx was prevailing in Thebes and Oedipus solved his riddle; the solution of riddle paved his way to his doom by fate. Now he has committed both sin: killing and marriage, for these prophesy was made on bases of his fate. In all above context Oedipus was helpless and like a puppet in the hands of divine powers. Oedipus and his father both tried to avoid fate but they became the prey of fate according to Sophocles and entirely Greek tragedy patterns.

Role of Character in Shaping Fate in Oedipus the King

Like Shakespearean tragedies, where hamartia play a role for downfall of a protagonist; Sophocles play, Oedipus the king also has some instinct of hamartia in the play. Fate is not solely responsible for the tragic ending of the play but Oedipus himself was responsible equally. Modern critics blame Oedipus’ character for his doom. Although his rashness is flaw in his character that cause the murder of Laius.

When Oedipus was told with a prophesy that he will kill his father, He should keep himself away from killing any man but he killed one. Here it is characters role in his tragedy. His rashness and swift decision making made him a killer. We observed that many times he threatens people including Tiresias, Creon, and shepherd to kill or banish. His hamartia paved his way towards a tragic end. Secondly when he was told with a prophesy that he will marry to his mother, why he married to a queen of more than his age. Why he did not choose a girl younger than him to marry. Apart than his rashness these two mistakes were also done by his character. So that’s why character is also responsible for the tragedy.