In this article, students will come across a detailed summary of Oedipus the King (Oedipus Rex); a Greek tragedy written by Sophocles 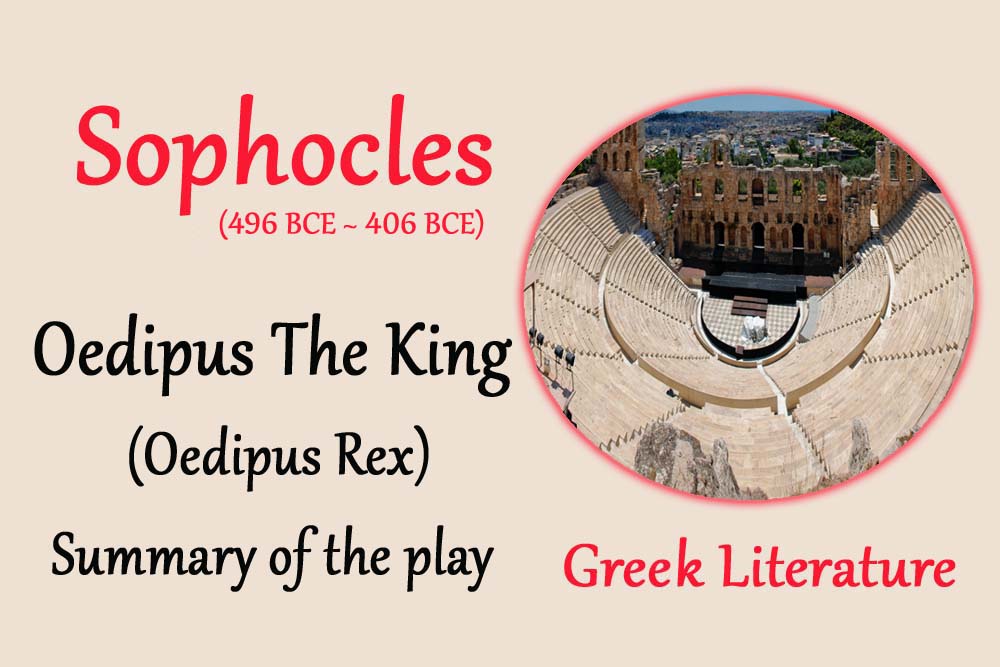 As the play opens, Oedipus, the king of Thebes, asks from a group of people that why they are gathered there. All the people were led by an old priest having garlands and flowers. The priest glorifies his honor and describes that a plague is destroying the whole city: blight in the city causing famine and sickness. Priest recalls Oedipus’ triumph over the Sphinx when no one could save their city except him. The priest begs from king Oedipus on behalf of whole city to save their city Thebes from this plague once more. Oedipus expresses his sympathies to his people and tells them that he knows it very well and before their request he has taken his initiative. Oedipus announces his efforts to end the plague that he has sent his brother-in-law, Creon, to the oracle to know about cause of plague and its solution. While Oedipus was addressing to people, Creon appears. Oedipus asks from Creon about oracle’s message.  Creon tells that oracle told me that plague will never end until murderer of Laius (the former King) is banished or killed. Oedipus immediately swears and assures to all people and priest that he will take action to find out the murderer to save the city from this plague.

The chorus appears on stage and through singing prayer to the gods Zeus, Athena, Apollo, and Artemis; they are depicting the fears of the Theban plague. In the name of the people, they plead for blessings from their gods, but they are worry for the sacrifice that may be demanded in return of blessings.

The king Oedipus asks from the people who are gathered there that if someone knows about the murderer of king Laius. He further tells that if someone is here who is murderer of Laius; he will not put to death but I will exile him only to save the city. He also makes an announcement for reward who will tell him about the murderer. But there is no one who is murderer or witness from the people. Oedipus curses the murderer and anyone who is providing shelter to him including himself.

The king Oedipus summons blind prophet Tiresias to get help from him to find the murderer. Tiresias is not willing to come but reluctantly he comes there. Oedipus asks for his help to find out murderer, but the blind prophet refuses for his help in finding the murderer. He tells that he has told them the solution of the plague now it is their duty to find out the murderer to save the city. The king is furious on his rejection for help and blames that he knows and he is providing shelter to the murderer. The king blames him that he took part in Laius’s death therefore he is not telling the truth. The king brags that when this city was in trouble by Sphinx; he set the city free from Sphinx by solving his riddle and that time where was this prophet to save the city from sphinx.  The blind prophet initially remains cool and tries to avoid telling the truth but on irrational and scolding behavior of king he tells that he himself (king) is the murderer of the Laius.

Oedipus became furious and declares that blind prophet and his brother-in-law, Creon, must be plotting against his throne. Tiresias reveals the fate (he will make himself blind) of Oedipus and his heinous sin (marrying to his mother) in hidden wordings blaming him responsible for murder and for this plague.

Chorus appears on the stage and wonders at the prophet’s accusation in their song. Being a kingly matter, chorus is confused and horrified. Still they favor the king until his charge of murder is proved.

In next scene, Creon’ denies of plotting against king Oedipus’ throne. Oedipus  is behaving irrationally and repeats his charges, Creon being cool and calm tries to pacify him and denies it arguing sensibly that he has no intentions to seize his throne. The verbal strife comes down when Jocasta (the queen and Creon’s sister) dispersed the people and, sending Creon home. When Jocasta comes to know that blind prophet charged Oedipus for Laius murder, she rejects it immediately that no one can see the future. She tells about the story of a prophecy to strengthen her point of view that her son would kill his father but we abandoned the child on a mountain and reminds him that a group of robbers murdered him on a roadway not a single man killed him. (She herself was worried for prophets’ charge).

Oedipus asks that if there is any witness of his murder; a shepherd, only living witness to the murderer was brought to Oedipus for investigation that if he know about murderer.

The chorus appears on stage and glorifies the gods and destiny, rejecting human pride.

Jocasta was much worried and makes a sacrifice to Apollo. Meanwhile, a messenger arrives from Corinth with a news of death of Polybus (king of Corinth).. Oedipus cheers at the news that his father died by a natural death and was not murdered by him. But he is still worried about the prophecy because his mother still lives.

Messenger overhears Oedipus’s rejoicing and clears his doubt that he has nothing to worry about, because Polybus and Merope were not his real parents but he was brought up by them. This revelation stuns Oedipus, and he awaits the witness shepherd to know about the truth of Laius’ murder.

Jocasta is now confirmed that Oedipus is surely the baby abandoned by Laius and her, and the prophecy she feared has come true. She beseeches Oedipus to stop his investigation, but he is curious to find out truth. Jocasta screams and runs into the palace.

The chorus appears on stage and sings a pleasant song to Mount Cithaeron, where the king Oedipus was found. They wonder if some god or goddess actually gave their king birth.

The shepherd arrives there but he resists telling about his birth and murder of Laius. Oedipus threatens him with violence, the shepherd reveals that long ago he disobeyed Laius orders and saved him (Oedipus) when he was a baby out of pity. Finally, he tells that the baby was the son of Laius and Jocasta.

On this horrible revelation, Oedipus comes to know that he has murdered his father Laius and married his mother Jocasta. Horrified by his heinous crimes, the king Oedipus rushes towards palace wildly.

The chorus, in his song, mourns Oedipus’ revelation of his birth, startling at the fall of king from throne and greatness.

A messenger comes out from the palace and proclaims that the queen Jocasta has suicide. He explains the details of the queen’s tragic death by her suicide as well as he tells about horrifying self-blinding of Oedipus’ with Jocasta’s pins.

Oedipus appears on stage and explains that why he has made himself blind.  Oedipus clarifies in agony that he has raked out his both eyes because he could not look again upon the loved ones he has defiled, specially his beloved two daughters Antigone and Ismene.

Creon took over the responsibility of throne of Thebes. Oedipus begs to Creon either to him put to death or he may banish him from the city to end plague of the city. Creon says that he will ask the oracle for decision; Meanwhile, he advices Oedipus to accept obedience. Oedipus disappears from stage with goes towards the palace with Creon. Chorus appears on stage for the last time and again laments Oedipus’ downfall.