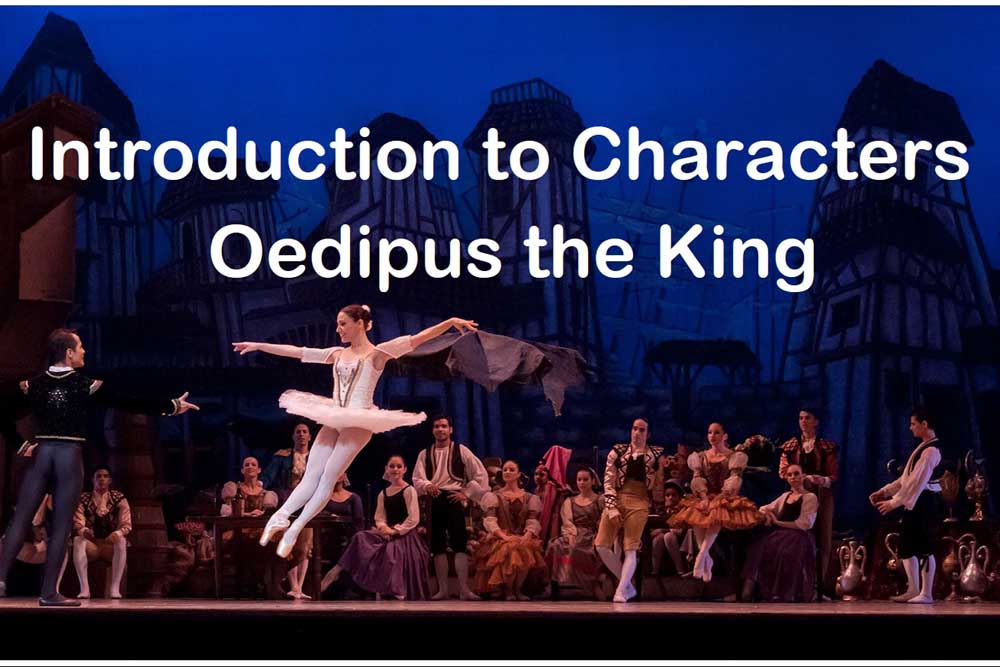 Characters in Oedipus the King

Main characters in Oedipus the King are: Oedipus (the king of Thebes), Jocasta, (the queen), Creon (Jocasta’s brother), a priest, a blind prophet, few messengers, a shepherd and a Chorus.

Oedipus is the king of Thebes and protagonist of the play. As the story opens he is he is unaware that he has murdered king Laius, his father and married to his mother Jocasta. When he comes to know that his heinous crime made this city so terrible; he blinds himself. Greek tragedies were based on “fate is destiny” but there is sufficient role of hamartia which brings his downfall from king to a blind man with no respect.

Jocasta, the queen of Thebes, was the wife of king Laius and after his death she married to Oedipus unknowingly that he is her son. When truth revealed to her about her second marriage; she commits suicide making tragic end of the play.

Teiresias is the blind prophet who made prophesies. He knows the truth about Oedipus’s parentage and murderer of king Laius. Oedipus summons him to find Laius’s murdererbut becomes enraged when Teiresias charged him for the murder. Teiresias’s prophesy, however, prove true eventually, suggesting that oracles must be trusted being a mouthpiece for the gods.

Creon is Oedipus’ brother-in-law and Jocasta’s brother. As the play opens and Oedipus is addressing to people, he appears returning from the oracle with a message that Laius’s killer must be killed or banished. Oedipus blames him for conspiring against him when Teiresias charged him for murder.  He is a loyal member to Oedipus throne and at the end when Oedipus is blind he takes the responsibility of Thebes. He is kind to Oedipus and forgives him.

A Messenger from Corinth is a man who reveals truth about Oedipus’ parents. He arrives there to tell Oedipus that his father, Polybus, is dead, and that the people of Corinth wish Oedipus to be their new king. When Oedipus is happy that his father died of a natural death not by his hands, messenger tells that they are not his real parents; a stranger from Thebes gave him a baby long ago as a gift to the Polybus: the king of Corinth. Oedipus is that baby who grow up there and left when became young. The Messenger provides a dramatic irony with a clue to find murderer.

The Herdsman gives Oedipus to the messenger to give that baby to the king of Corinth; denying their order, and he is only the same man who is eyewitness of Laius’s death. When he returns to Thebes and learns that new king is that man who killed Laius, he requests to leave the city. Oedipus summons him when the messenger alludes to his intimate knowledge of the crime, in the hopes of discovering the identity of his true parents. Initially he is reluctant to tell truth but when Oedipus became furious he clears all his doubt that he is murderer of King Laius and one who married to his mother.

The Priest appears at the start of the play with followers make a sacrifices to the gods, hoping that the gods will end the plague that has ruined the city of Thebes. Oedipus assures him that he has taken an initiative already to know about this plague by sending Creon to the oracle.

The Second Messenger appears on stage after suicide of Jocasta. He tells about Jocasta’s suicide to Oedipus and the Chorus.

Ismene and Antigone did not appear in the first play: Oedipus the king. Both are Oedipus’s young daughters who are led out at the end of the play. Oedipus laments about their ruined respect that they will never find husbands because of their father’s heinous crime and requests to Creon to take care of them.

The Chorus is a group of men who act on stage to reveals something in their songs and odes and pray to gods in Greek tragedies. They delivers some information to the audience and scene of bloodshed are also described by chorus instead of physical act performance.