Character Analysis of Oedipus
(Oedipus as a Tragic Hero)

In this article, you will learn about character analysis of Oedipus; a tragic hero from Sophocles’ Oedipus Trilogy. The character analysis are based upon first play Oedipus the King where Oedipus was king and protagonist of the play. 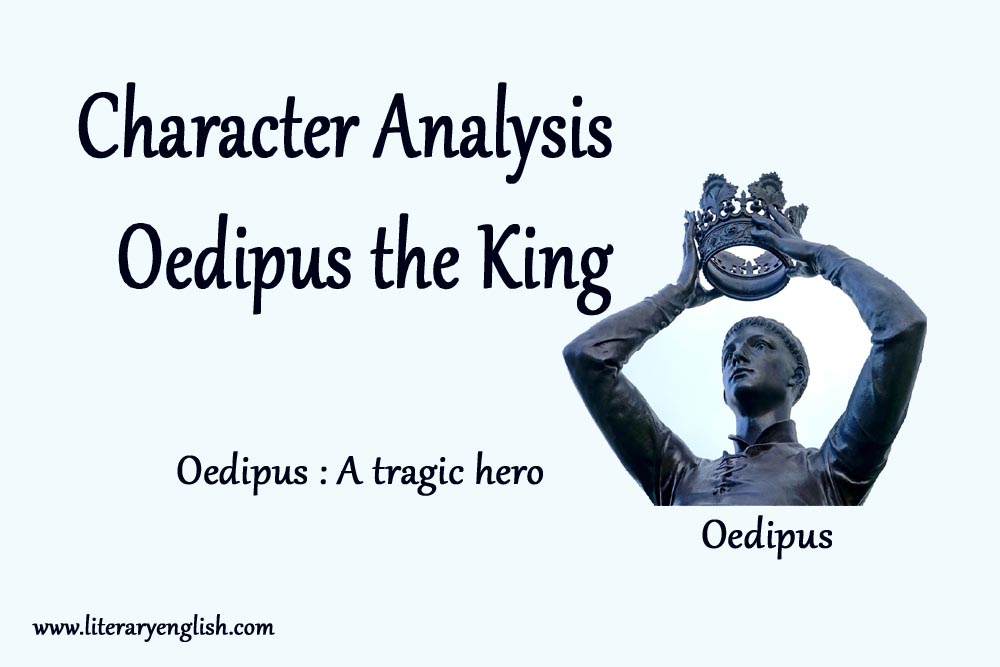 Oedipus is Sophocles’ most tragic hero who kills his father king Laius and marries his mother Jocasta unknowingly that she is his mother. Oedipus’ brilliance, wit, and willpower serve him well in solving mysteries like the riddle of the Sphinx. His quest to reveal mysteries brings him to a fate which he tried to escape. He stands with his stance with determination thought the play.

Oedipus is a hero of great insight. At the opening of the play, Oedipus the King, we see that these qualities in his speech that make him an outstanding ruler.

When the citizens of Thebes beg him to do something to save the city from plague, Oedipus proves himself as a responsible leader and tells that that he has already taken initiative to know the cause of this malignant plague and possible solution to end it.

He has been a good ruler for Thebans, and in any catastrophe he acts decisively in favor of his city, but on other hand Oedipus lacks discretion and sometime acts rashly because of his pride in wit.  When Creon returns from oracle, he hints sensibly that he want to tell the news from the oracle in private, Oedipus refuses and ask him to tell publically because he want to show how he eliminates corruption from city.

At the beginning of play, Oedipus is relaxed and confident. He is sure to overcome plague once more as he already has saved Thebes from the curse of the Sphinx and became king. His pride in performing his intellectual achievement (like solving riddle of Sphinx) before the whole city is clear in his speeches. His pride is vivid in his proclaim when he announces his name as though it were itself a healing charm:

However, by the end of this tragedy, his name will have become a symbol of disgrace and curse, so much so that, in second play of trilogy, Oedipus at Colonus, the Chorus is terrified even to hear his name and cries: “You, you’re that man?” (Oedipus at Colonus, line 238).

Making judgments hastily brings his doom. When Tiresias is not willing to tell the name of murderer, He becomes furious and acts rashly; even he blames his brother-in-law for conspiring against him. He threatens Tiresias and Creon to banish. He rebukes at prophet and counts his services made to Thebans including saving from Sphinx.  He lacks patience and ignites quickly in his decisions. The way he threats shepherd to tell the truth, his moving towards palace after knowing truth, stabbing into his eyes, and begging for death or exile from Creon: all are his hastily decisions that contributes in his downfall.