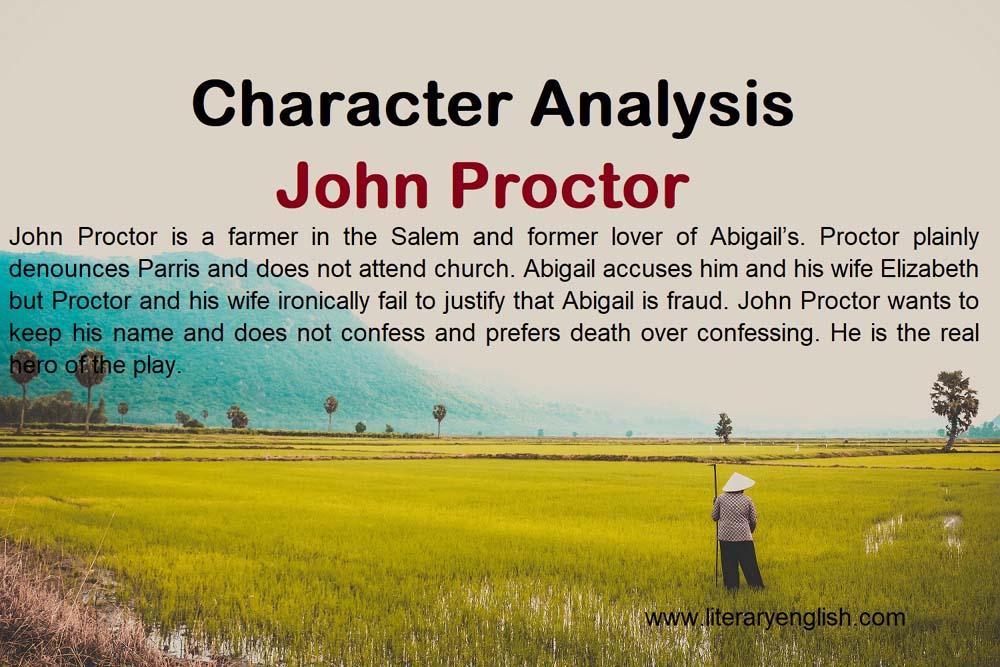 John Proctor is one of the main characters of the play who remain on the stage most of the time. Audience knows him from the first scene of the play and witnesses his doom at the end of the play. He is a tormented individual who believes that his unfair relations with Abigail irreparably degraded him in the eyes of God, his wife, and himself. He did surrender to guilt and commit adultery; however, he lacks the capacity to forgive himself.

Relationship of Proctor remains tense with his wife, Elizabeth, throughout the play. Elizabeth is aware of his affair with Abigail and cannot forgive him and trust him again. When Proctors comes late from fields, his wife rebukes him for being late that he might be visiting Salem to make his friend Abigail happy but Proctor denies it.

John Proctor keeps struggling with the weight of his sin throughout the play until he faces doom. He struggles to keep his name and the respect and integrity associated with it. He was striving for good name and respect throughout the play. We can guess his struggles for good name and self respect when he submit a statement signed by ninety two people that Rebecca Nurse is an honest and well respected woman in the Salem but court did not accept it. If he can struggle for another individual how he will accept any strain on his own name?

He was against the witchcraft trail where little girls were accusing innocent and well-respected people and court was putting them into prison. He also denounces Parris openly who is not performing his religious duty. He speaks to Mary Warren to tell the court that all the girls are pretending and accusing falsely and also submit a signed statement of Mary Warren that she was pretending like other girls. He was the only person who had deep concern with the lives of innocent accused individuals.

He willingly sacrifices his good name just to save his wife and other innocents. Once Proctor admits his adultery with Abigail, he effectively considers himself an adulterer and loses his respect associated with his good name. He reveals his adultery in order to prove Abigail a fraud and to save lives of those innocents who were falsely accused by Abigail including his wife Elizabeth. But ironically he fails to do so and instead of proving Abigail a fraud he unintentionally proves his wife a liar who hides adultery of her husband in the court, not knowing that her husband has already confessed it.

At the end of the play, When Hale requests him to confess his guilt; Proctor refuses to confess. On request of Elizabeth, Proctor once confesses but when he comes to know that the court will nail his false confession to the church door. He tears down his signed statement and prefers death over confession. This action further exemplifies his integrity. Proctor knows that he will not forgive him again if he agrees to confess. He wants to live, but not without respect and honor in his life. The Elizabeth’s forgiveness enables him to forgive himself and finally regain self-respect and his good name. As he was lead to the gallows, he finds peace for the first time in the play.