Difference Between Shall and Will 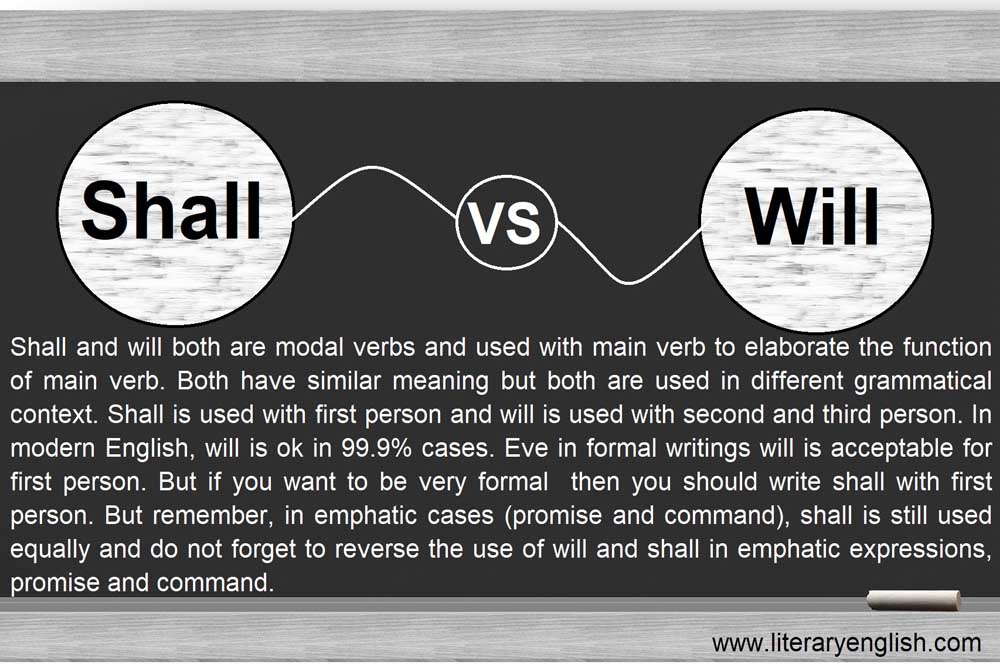 Shall and will both are modal verbs or auxiliary verbs and used with main verb to elaborate the function of main verb in a clause or sentence. Both have similar meaning in a sentence but both are used in different grammatical context.

There are two main varieties of English: British English and American English. As English emerged in England and due to its expansion into the world through different colonies, English was adopted throughout the globe and people normally preferred British English in their writings.

On the other hand, America, being a super power of the word and a big country by population and area, influenced its variety over other countries. Now all over the world both verities are used in mixed norms. In writings and formal contexts, British verity is preferred; but on other hand in speaking and in informal context, people follow American verity.

Basic Difference Between Shall and Will: British vs. American

The modal verbs will and shall are bit confusing terms with a little difference in their use and both are used to express the future tense.

In British verity of English, shall is used only for first person and for second person or third person will is used; both in writing and speaking context. Look at the examples to understand it better.

“I shall go to school on bus.”

“We shall focus on our goal.”

“You will find it better in next visit.”

“He will face a trouble due to his attitude.”

“I will go to market on bike.”

“We will focus on our journey.”

“You will find it better in next visit.”

“He will face a trouble due to his attitude.”

Same rules are followed for negative sentence and questions. Question in first person will start with shall. Look at some examples below.

“Shall we go to watch picture?”

“Shall I work hard to pass the exam?”

“Will they come on my wedding party?”

“Will she marry him?”

People use shall very rarely in modern English and consider it old-fashioned but still people should be familiar with the traditional distinctions between use of shall and will. Look at the opening line of a sonnet (poem) by William Shakespeare.

“Shall I compare thee to a summer’s day?” (William Shakespeare)

Emphatic Use of Shall and Will: (Command, offer, promise or sense of importance)

In above discussion, hope you have understand the use of shall and will. But it is very interesting that when we use will or shall for emphasis, we break the above rules. How we use it in emphatic cases or when we make a statement with Command, offer, promise or sense of importance? It is very simple. We will reverse the rules for shall and will. We will put shall with second and third person and will with first person. Look at the examples below.

“You will go to the class.” (Simple statement)

“You shall go to the class.” (Command)

“I shall attend your wedding party.” (Simple statement)

“I will attend your wedding party.” (Promise)

What to use in Modern English? Will or shall?

In modern English, will is ok in 99.9% cases. Eve in formal writings will is acceptable for first person. But if you want to be very formal or writing a legal document, then you should write shall with first person.