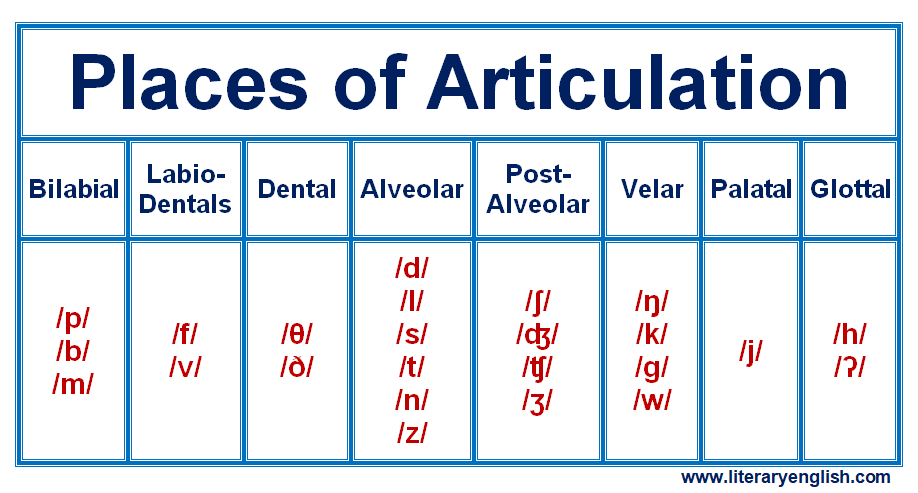 What are Articulatory Gestures?

Place of articulation is the term used for describing the position of articulatory gestures or speech organs when they shape a specific sound. For example, when two lips come close enough so that there is no air passage, they help to produce sound like /m/ /b/ and /p/; known as bilabial sound due to the movement of both lips. In simple words,  the location at which two speech organs/articulators approach or come together in producing a speech sound, as in the contact of the tip of the tongue and upper teeth in sound of word “thanks”.

This is one of the simplest points of articulation.  A bilabial consonant sound is made with two lips e.g. /b/, /m/ and /p/ and happens or occurs when we block/constrict airflow out of the mouth by bringing both lips together.

Examples of bilabial sounds in words are:

The labio-dental sound is produced with the upper teeth and inner lower lip for example /v/, /f/ as in ‘vine and feel’. Labio-dental consonants occur when we block/constrict airflow by curling your lower lip back and raising it to touch your upper row of teeth.

Examples of labio-dental sounds in words are:

The dental sound is produced by the tip of the tongue or blade and upper front teeth. Dental sounds occur when we block/constrict airflow by placing tip of the tongue on or near the inner surface of the upper teeth. For example, when we say words like thigh, thy; we feel that first sound in each of these words to be dental.

Examples of dental sounds in words are:

Examples of alveolar sounds in words are:

Examples of post-alveolar sounds in words are:

Retroflex sound is produced with the tip of the tongue curled against the back of the alveolar ridge toward the hard palate. In English [s] sound in “pleasure” is retroflex sound. Many English speakers do not use retroflex sounds but it is common in Indo-Pak languages such as Urdu, Hindi and other regional languages.

The roof of our mouth is a sensitive area that is called hard palate or palatal area. Palatal sound is produced with blade of the tongue and the hard palate such as /j/ sound id word ‘yes’. In English sounds, there is only one palatal sound: a sound between j and y that is the sound of /j/, as in words “Yes” and “You”.

Examples of post-alveolar sounds in words are:

Examples of velar sounds in words are:

This is the point of articulation where tongue plays no role. Glottal sound is produced by air passing from the windpipe through the vocal cords as /h/ sound in word ‘hi’.  The glottis is actually two vocal folds (i.e. vocal cords) that act like a bottle cap to windpipe. To produce a glottal sound, both vocal folds are brought together; as in the case of [ʔ] and [h] in many languages. Glottal consonants aren’t consonants but they just play roles of consonant in English language.

Examples of glottal sounds in words are:

// as in a phrase “I do part-time job” in the phrase, the /t/ in “part” is dropped and the vowel sound before it is closed at the glottis.