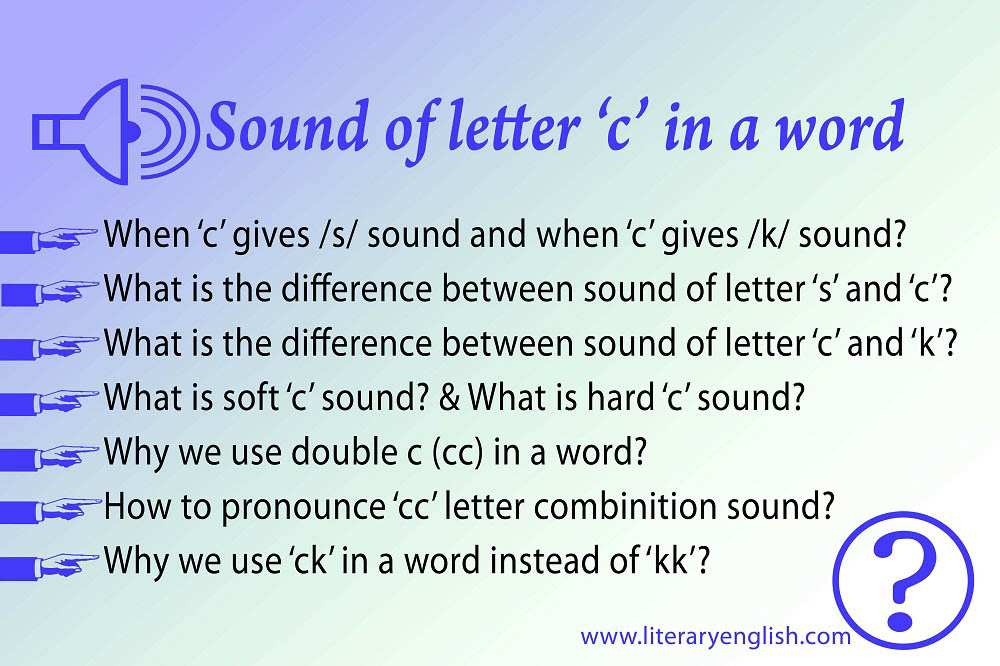 Sometime readers become confused to pronounce some words because of various sound of same letter in a word e.g. the word cycle has two different sounds /s/ and /k/ by same letter ‘c’. Because sometime it gives sound of /s/ and sometime /k/.

Regarding the sound of letter ‘c’ in a word, many questions born in the mind of the readers. Below are the some questions that will be answered in this article.

What is the difference between sound of letter ‘s’ and ‘c’?

What is the difference between sound of letter ‘c’ and ‘k’?

Why we use double c (cc) in a word and how we pronounce ‘cc’?

The sound /s/ can be spelled either with letter ‘s’ or ‘c’. There are no clear rules to define the sound of /s/ but we can guess it by some hints. But these hints are not 100% perfect, sometime there are exceptions and these exceptions are explained at the end of the article.

The word Simple and Cynical start with sound of /s/ but initial letter is different in both words.

We will discuss both letter and their sounds individually in a word.

Below are the some examples:

There are three ways to create /k/ sound:

We will discuss all above three way briefly.

Below are some examples of the letter k for a /k/ sound followed by a vowel e, i, or y.
Keep,  shake, skip, skill, risky, poker,

When the sound /k/ is at the end of mono-syllable (one-syllable) word followed by long vowel, we use letter ‘k’.

For example: Milk, took, soak, look, cork, bark, hawk, and book are the words that have /k/ sound at the end of one-syllable words followed by long vowel e.g. vvc ‘took’ or vcv ‘take’.

Look at the examples given below:

Cast; sound /k/ by letter ‘c’ followed by letter a.

Cut; sound /k/ by letter ‘c’ followed by letter u.

Across; sound /k/ by letter ‘c’ followed by a consonant letter.

Sound of double cc in a word

When a consonant letter is between two vowels like vcv (vowel+consonant+vowel) it mean the first vowel is to be pronounced with a long sound. If we need a short vowel sound before the consonant, we will double the consonant letter in the middle of the word e.g. account, accurate, occupy, tobacco, accuse, broccoli, raccoon, hiccup.

When letter combination ‘cc’ is followed by vowel, e, i,or y, soft C rule will apply with second c and it will give sound of /s/.

For example the word vaccine has cc but second c has soft sound so here first c will sound of /k/ and second sound will give /s/ sound.

The /k/ sound by ‘ck’ combination in a word

Here are some common examples:

We also use the ck combination in another way where /k/ followed by a short vowel sound and before a vowel e, i, or y.

Here are some examples:

Picking, lucky, blackest; /k/ sound followed by short vowels and before vowels, e, i, and y.

Mixed sounds of /s/ and /k/ in a single word

Some words in English have both of the sounds /s/ and /k/ in a single word and interestingly both sounds are produced by letter c.

Below are the few examples where both sounds are present.

There are some exceptions where above rules do not work. There are multiple aspects that lead to confusion because some words are borrowed from other languages e.g. Latin, French, or Greek that do not comply with English spelling rules. Sometime this variation is due to regional influence. One notable exception is a word ‘Celt’ (pronounced as /kelt/), describing e.g. the Irish and Scots regions.

Everyday English is full of French-derived words and Germanic words. Many academic words are Latin or Greek origins. English uses Latin-based words in science, and the social sciences are full of Greek-based words.

Some other exceptions are soccer and muscle where letter c in not complying with general spelling rules.

Back to Home Page