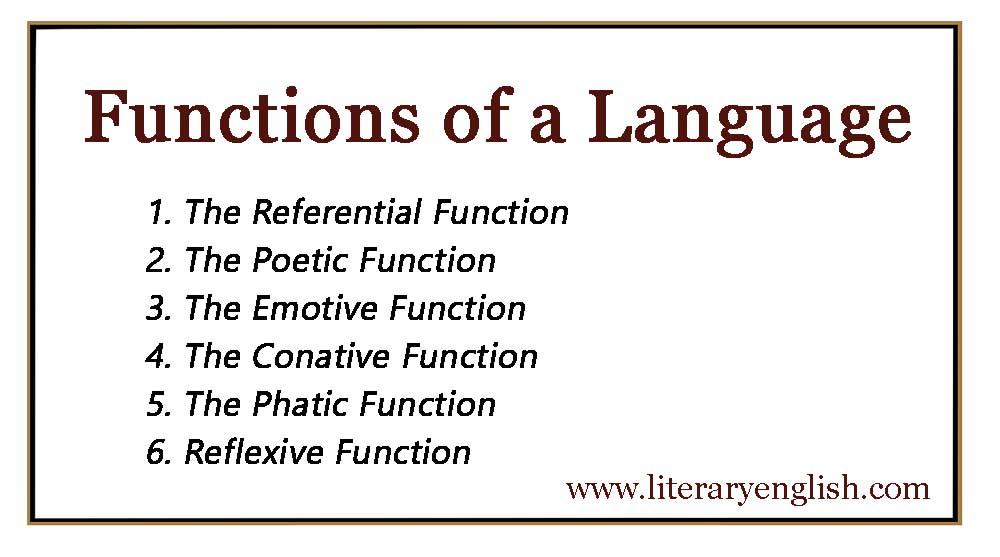 What is a Linguistic Function?

Linguistics functions according to Geoffery Leech

First, we will discuss Geoffery Leech (1974) who mentioned that any language has mainly five functions. They are:

1.      Informational Function: This function of language focusses on the message and speakers use it to give/transfer new information. It depends on truth and value e.g., it is my car.

2.     Expressive Function: In this function, user expresses his feelings, attitudes, or mood. Poetic form of literature is its best example.

3.     Directive Function: In this function, speaker aims to influence other by making a command, order, question, or a request. In directive function, the main emphasis is on receivers’ end e.g. could you please lend me a pen?

Functions of language according to Roman Jakobson

1.      The Referential Function: It describes a situation, object or mental state. It includes logical, truthful and genuine information.

2.     The Poetic Function: It lacks truthful information as used in poetry, slogans or dreams.

3.     The Emotive Function: It is very similar to expressive function by Leech.

4.     The Conative Function: It is very similar to directive function by Leech.

6.     The Metalingual or Reflexive Function:  This function is the use of language to discuss linguistic codes or structure of language itself.

H. Douglas Brown categorized linguistic functions into two categories. His views are very similar to Leech or Jakobson. That are: