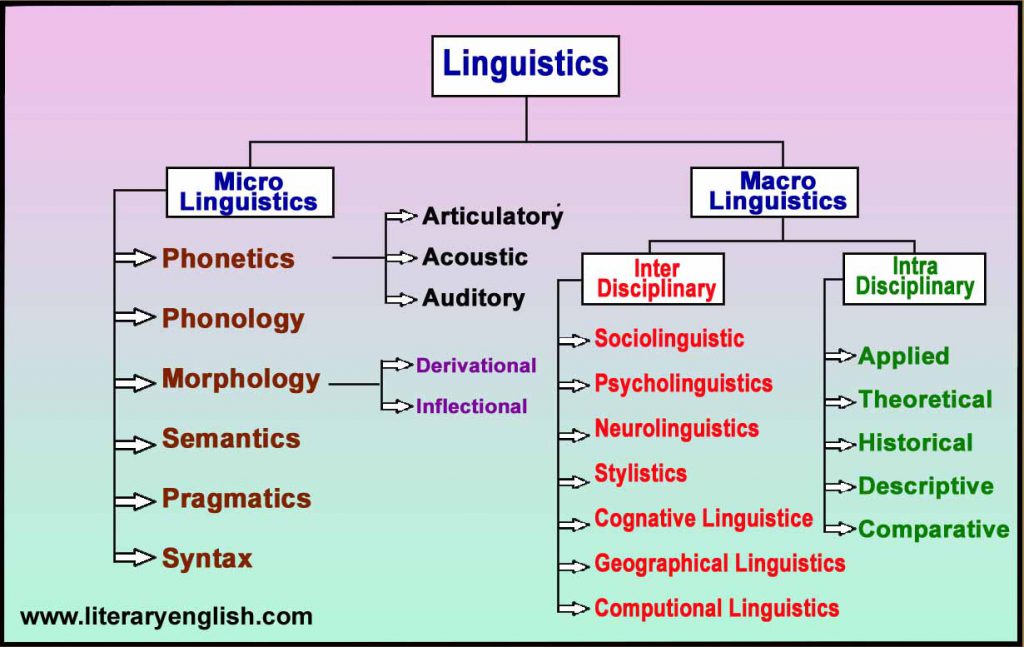 According to Robins (1985), “Linguistics is concerned with human language as a universal and recognizable part of the human behavior and human faculties, perhaps one of the most essential parts of the human life as we know it and as one of the far-reaching of human capabilities, in relation to the whole span of mankind’s achievements.”

From various point of views, linguistics is divided into two main branches:

These both branches of linguistics are divide into further various branches. We will discuss all branches with brief definition.

Micro Linguistics and its Different Branches

Micro linguistics focuses on the study of language itself, including its sound (phonetics and phonology) grammatical structures (morphology), syntax, and meanings (semantics) in context (pragmatics).

Phonetics is the study of the sounds of language. It deals with the way sounds are produced, transmitted and perceived by human beings. Phonetics is further divided into three different branches that are:

1. Articulatory phonetics: deals with the study of articulation of speech sounds,

2. Acoustic phonetics: studies the physical properties of sounds as transmitted from mouth to air and then received by ear drum,

3. Auditory phonetics: deals with the study of perpetual response to speech sounds as mediated by ear, auditory nerve and brain.

Phonology is the study of how sounds are arranged in each language as organized units of speech. It also looks into the specifications in the distribution of sounds into small sound in each language.

Morphology deals with the forms of words, use of words and construction of words by small letters. It studies how words are formed into small meaningful units (morphemes). Morphology is divided into two further branches: inflectional morphology and derivational morphology.

Semantics is the study of meaning in a language. It focuses on studying the structure of meaning of words and making a sentence that is meaningful.

Pragmatics also deals with the meaning of language but is focuses on meaning in context rather than individual word meanings.

Syntax is the study of phrase construction, clauses and sentences in a language. It deals with basic word order followed in any languages.

Psycholinguistics deals with the study of the mental aspects of language and speech. Its domain is concerned with how language is represented and processed in the brain. Psycholinguistics, study of linguistics and psychology, is part of the field of cognitive science.

Neurolinguistics deals with the study how language is represented in the brain, how and where a brain stores knowledge of a language that we speak. It focuses on what happens in our brains as we acquire a language, and what happens as we put this knowledge into practice.

Stylistics is an interdisciplinary field of linguistics that deals with the study and interpretation of style and tones in both written and spoken language.

Geography Linguistic also called dialect geography is study of local or regional variations of a language or dialect studied as a field of knowledge. Language geography is the branch of human geography that studies the geographic distribution of language(s) or its constituent elements.

Theoretical linguistics also known as General Linguistics deals with concrete theories presented by scholars of language about various aspects concerning to linguistics. General linguistics is devoted to the theoretical study of describing a language and methods of investigating linguistic phenomena.

Descriptive Linguistics is concerned with the description and analysis of the ways in which a language operates and is used by a given set of speakers at a given time.